6 Celebrity Weddings So Luxurious They Lasted All Weekend

Many brides dream of their perfect wedding, but who says the celebration needs to be limited to just one day?

From lavish rehearsal dinners to delicious farewell brunches, there are plenty of opportunities to keep the party going all weekend long.

Here are six celebrity couples who turned their big day into a big wedding weekend.

Kim Kardashian and Kanye West: Before tying the knot in Florence, Italy on May 24, 2014, Kardashian and West celebrated their upcoming nuptials with a trip to Paris. The pre-wedding festivities included an intimate brunch hosted by Valentino Garavani, a lavish dinner at the Palace of Versailles and a "last supper" with Kardashian's closest girlfriends. 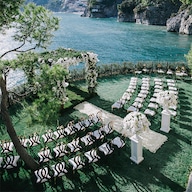 Inside the Grandest Celebrity Weddings: From Dresses That Fly First Class to NDAs and Decoy Brides, Big Day Secrets Spilled

George Clooney and Amal Clooney: The actor and the barrister wed in Venice, Italy on Sept. 27, 2014. However, the celebrations kicked off a little early. On the eve of the wedding, fans spotted the couple's celebrity pals arriving by water taxis. The bride and groom then enjoyed their final flings before the rings and celebrated their bachelorette and bachelor parties with friends. Still, the fun didn't end after the couple said "I do." The next day, the newlyweds treated their guests to two delicious meals. They also legalized their marriage with a civil ceremony on Sept. 29, 2014. Then, about a month later, the bride's parents celebrated the couple with a post-nuptials dinner in England.

Jessica Simpson and Eric Johnson: Instead of celebrating their nuptials with one big day, Simpson and Johnson partied for four days straight. First, the two enjoyed a rehearsal dinner at San Ysidro Ranch in California with about 70 family members and friends. Then, the couple invited their guests to join them for a Fourth of July barbecue. Nobody went home hungry as attendees dined on Southern favorites, including friend chicken, brisket, macaroni and cheese and more. After that, it was time for the big day. Simpson and Johnson tied the knot on July 5, 2014. Finally, the newlyweds bid their friends and family members adieu with a farewell brunch.

Justin Timberlake and Jessica Biel: Timberlake and Biel became husband and wife on Oct. 19, 2012. However, the wedding celebrations started earlier in the week. Back in 2012, a source told E! News the couple kicked off their wedding weekend in Italy with a gathering at a grotto in Lama del Trappeto. There, the couple reportedly dined on local cheeses, olives and wine. They also reportedly lounged on recliners around an open fire and enjoyed music and dancing. In addition, the duo's celebrity pals celebrated the bride and groom with a pre-wedding party that was complete with fireworks.

Sofia Vergara and Joe Manganiello: Before the Modern Family and Magic Mike stars said "I do," friends and family members toasted to the happy couple at a cocktail reception held on a private beach at The Breakers Palm Beach. The bride and groom kept the party going with a lavish rehearsal dinner at Café Boulud in Palm Beach. From the red rose table settings to the customized napkins that read "He Had Me at Hola," the party's décor truly reflected the couple's style. Vergara wore two dresses throughout the evening, and Manganiello serenaded his bride with a rendition of Guns N' Roses' "Sweet Child O' Mine." Then, the two became husband and wife during an evening ceremony on Nov. 22, 2015.

Adam Levine and Behati Prinsloo: On the eve of their wedding, the Maroon 5 singer and model celebrated their upcoming marriage with a Friday night bash at El Dorado in Los Cabos, Mexico. A source told E! News the duo relaxed on the beach and drank margaritas with approximately 100 guests. After the two became husband and wife on Saturday, July 19, 2014, they bid their guests farewell with a delightful brunch.