Miley Cyrus and Liam Hemsworth Split: Look Back at Their Road to Romance

Miley Cyrus and Liam Hemsworth have ended their romance.

On Monday, Sept. 16, E! News confirmed that the twosome had called off their engagement. The split was "Miley's decision," claims a source, who says the "Wrecking Ball" singer believed her fiancé had been "less than faithful to her."

Miley, 20, and Liam, 23, were together for nearly four years, and their relationship had its highs and it had its lows. Let's take a look back at Miley and Liam, the way they were...

June 2009: Miley and Liam meet for the first time while filming The Last Song in Tybee Island, Ga. Rumors that their onscreen romance translated to a real-life love begin to circulate.

March 2010: Finally, at the movie's premiere, Miley and Liam confirm they're dating and walk their first joint red carpet.

August 2010: After a year of dating, the couple briefly call it quits.

September 2010: Not to worry, though! Just a month later, sources tell People Miley and Liam are back together.

November 2010: Slight bump in the road here. Sources tell E! News the duo "are, and have been taking a break." But an insider adds, "Don't be surprised if they get back together."

March 2011: Can't keep these lovebirds apart! Sources tell E! News Miley and Liam are "hanging out a lot" but they're "taking it slow and just enjoying each other's company."

PHOTOS: Check out these couples who have broken up, but got back together 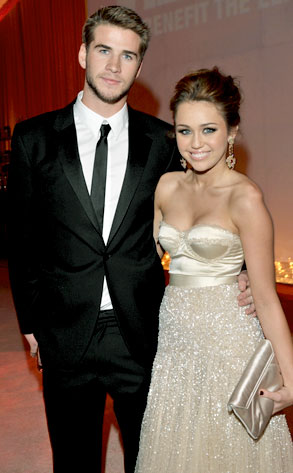 Dec. 11, 2011: Phew, definitely together. Miley and Liam walk the carpet together at CNN Heroes: An All-Star Tribute in L.A., completely confirming their recoupled status.

March 2012: Miley is spotted wearing a stunning topaz ring on that finger. People quickly begin to speculate, but Miley takes to Twitter to clear things up, writing, "I'm not engaged…I've worn this same ring on this finger since November! People just wanna find something to talk about! It's a topaz people!"

PHOTOS: See how Miley's style has changed through the years

June 6, 2012: Bling bling bling! Miley and Liam confirm they're engaged. "I'm so happy to be engaged and look forward to a life of happiness with Liam," the bride-to-be says.

November 2012:  Miley sets the record straight about her upcoming nuptials on The Ellen DeGeneres Show. "There is some rumor going around that I'm having, like, 47 weddings," she says. "I'm not. I'm having one wedding. That's my day and whatever I want on that day will be about me and that moment. That look of love." 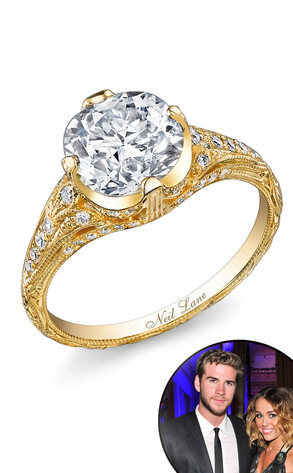 February 2013: Blogger Perez Hilton tweets that Miley is cheating on Liam with Ed Westwick. Miley fires back, telling him she's "never been with Ed W in my life" and calling him out on his hypocrisy and "promise to spread love not lies." She later tells E! News if Perez stirs up trouble again, "I'll whoop his ass."

Feb. 24, 2013: Miley and Liam attend separate Oscars parties (because mama Tish Cyrus wanted to go to Elton John's fête with her daughter) fueling the breakup rumors—again. Despite tabloid reports to the contrary, a source close to Miley tells E! News she and Liam "are totally together."

VIDEO: Do yourself a favor and watch Miley twerk!

March 2013: Miley steps out without her engagement ring in L.A. but slams "lies" that her and Liam's relationship is in trouble. She focuses on her music in L.A., while Liam takes a holiday in his native Australia and follows through with his promotional obligations. Regardless of speculation, a source tells E! News things are "fine between them." By mid-month, Miley is wearing her engagement ring again, and a source confirms to E! News that while Liam was out of the country, he and his fiancée were "in constant contact."

March 25, 2013: Liam pays a visit to Miley's house, and the Queen of Twerk herself distracts us all with her booty-poppin' skills (while wearing a unicorn onesie, nonetheless). Meanwhile, a source tells E! News there are "serious problems" for the twosome, but "they do genuinely love each other and they really do want to work it out." 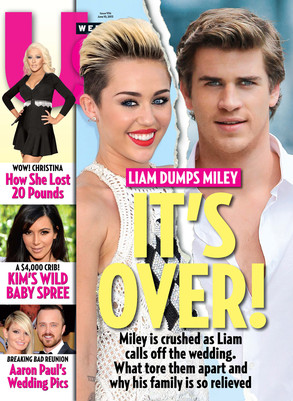 April 2013: A confirms to E! News the engagement is still on, adding that Miley and Liam are "making healthy strides in their relationship." The bride-to-be is snapped with and without her ring, and an insider confirms once again, "They live together. The wedding is still on."

April 16, 2013: My achy breaky heart! Billy Ray Cyrus tells Nightline he doesn't know if Miley and Liam will actually make it down the aisle. "They're young. They're kids. The great news is they're great friends," he says, adding, "And if you end up getting married, that's your business too, you know?"

May 9, 2013: Rumors that the Hemsworth family staged an intervention to break up Liam and Miley's love prove to be untrue when the lovebirds are spotted out and about running errands like any other couple. 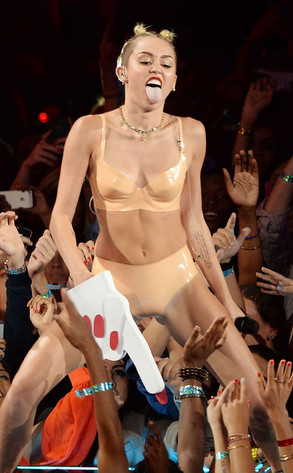 May 29, 2013: Us Weekly boldly claims that Liam dumped Miley, but sources tell E! News they're still trying to make it work. Reps for Liam and his love stay mum on their relationship status, but as Miley's said before, she's only talking about her music from here on out.

June 17, 2013: During a date night to the movies, Miley and Liam are photographed together for the first time in five months.

Aug. 8, 2013: Miley supports Liam at the Paranoia premiere in what will be their final red carpet appearance as a couple.

Sept. 11, 2013: Rumors swirl that Liam is "sexting" January Jones, but the actor's rep tells E! News this is "tabloid fiction."

PHOTOS: Look back at these pics of Miley and Liam's road to romance