Inside Teresa Giudice's Fraud Case: How Her Bankruptcy Filing Led to Criminal Charges 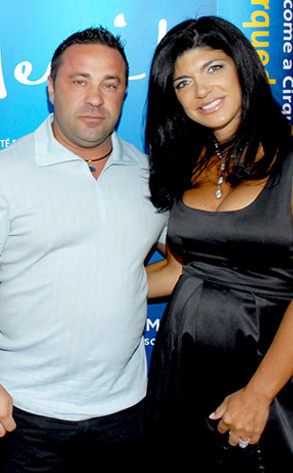 Joe and Teresa Giudice filed for bankruptcy in 2009 and dropped their petitions in 2011. So why were the Real Housewives of New Jersey couple just charged yesterday with, among other things, trying to hide assets and income during the bankruptcy process?

"When you file for bankruptcy, everything is public," New Jersey tax attorney Todd Unger, who does not represent either Joe or Teresa, tells E! News.

"If you have someone that owes back taxes and at some point they have filed bankruptcy, the government can go and just pull that bankruptcy record, just like you or I can, and they can start looking at inconsistencies. 'Well, wait a minute, what's this, what's that?'" he explains.

The 39-count federal indictment handed down Monday alleges that Teresa failed to disclose her real Real Housewives income in her bankruptcy filing. The criminal complaint charges that both she and Joe signed agreements in the summer of 2009 to appear on the Bravo show for $110,000 in compensation, but did not declare that money over the course of their bankruptcy proceedings, which began in October 2009 and latest until Dec. 15, 2011.

"The indictment returned [by a grand jury] today alleges the Guidices lied to the bankruptcy court, to the IRS and to a number of banks," U.S. Attorney Paul Fishman said in a statement Monday. "Everyone has an obligation to tell the truth when dealing with the courts, paying their taxes and applying for loans or mortgages. That's reality."

And when government agencies such as the Department of Justice and the IRS pool their resources to make a federal case out of something (so to speak), there really isn't anywhere to hide.

"These enforcement agencies are powerful in and of themselves, but when they start coordinating, there's no doubt that [their power multiples]," Unger notes.

"Most tax cases, by the way, are not your typical ‘Hey, I didn't pay taxes.' Those are very rare," he says. "Typically they would come through an audit where the government would say, ‘Wait a minute, you've got all these assets. How are you affording this, you didn't receive an inheritance, you didn't receive gifts...'

"When you start reading this and you can see how these different areas kind of tie together," Unger continues. "'OK, wait, they're on TV,' and the government researches you. They'll look online, they'll look on TV, they'll look at public records, i.e. bankruptcy, deeds that are reported, courthouse records."

And yes, Unger says, the Giudices' celebrity status may have not have helped them in this case, at least as far as making them desirable high-profile targets goes.

"These high-publicized cases serve as the best advertisement for the government," he say. "And, in particular, the IRS. The truth is, the government loves them. People know when celebrities get in trouble. And it creates this fear, especially with the IRS."

Teresa's attorney, Henry Klingman, has said publicly that his client plans to plead not guilty when she is arraigned Aug. 14. She and Joe were each released on $500,000 bail earlier today.

"It's almost invariably true that in federal criminal cases such as this one the judge requires each defendant to have their own attorney," Klingman told E! News today. "It reflects the ethical rules so the lawyers avoid conflicts of interest. Even if people are in the same page like a husband and wife, they could theoretically go in different directions at some point in the future."

PHOTOS: Where are the ex-Housewives now?

Meanwhile, putting the idea of going to trial and being found not guilty aside for a moment, Unger predicts that the Giudices will work out some sort of plea arrangement with the government that will allow them to avoid the stiffest of penalties attached to their case.

A bankruptcy fraud conviction could lead to five years in prison, while one count of wire fraud carries a maximum penalty of 20 years in prison and a $250,000 fine, and bank fraud and loan application fraud carry possible 30-year sentences and $1 million fines.

Joe is also accused of failing to report roughly $1 million in income between 2004 and 2008. A count of failing to file a tax return carries a possible one-year prison sentence and a $100,000 fine. Joe is charged with five counts.

PHOTOS: OMG moments on The Real Housewives of New Jersey

TAGS/ Teresa Giudice , The Real Housewives Of New Jersey , Legal , Top Stories , Most Read
GET POP CULTURED!
*Email entered incorrectly. Please try again.
By subscribing to our newsletter you agree to the Privacy Policy and Terms of Use
Daily
Weekly