How Kevin Hart Is Fighting His Way Back to Normal

The song could not have been more apropos.

As Kevin Hart walked up to the stage at Santa Monica's Barker Hangar Sunday night to collect his trophy for Comedy Act of 2019 at the 2019 E! People's Choice Awards, Kanye West's lyrics rang out.

"N-now th-that that don't kill me, can only make me stronger."

Which, truth. As scary as his Sept. 1 car accident looked—from the totaled car to the back surgery that left him laid up at Los Angeles' Northridge Hospital for 10 days—the actor and comedian has emerged from the record with a new joie de vivre. When he isn't out enjoying his second chance (ahead of his People's Choice Awards appearance, he enjoyed a Friday date night with wife Eniko Parrish at Beverly Hills' Mr. Chow) he's espousing a fresh gratitude for his ability to live it. 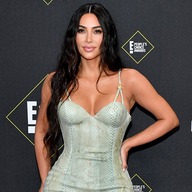 "First and foremost, thank God because I definitely don't have to be here," the 40-year-old said while accepting honors for his Kevin Hart: Irresponsible Netflix special. "Being that I am, it makes me appreciate life even more. It makes me appreciate the things that really matter. Family. I want to thank my wife and kids, who really stepped up to the plate for me."

He was also grateful for the fans, whose prayers and words of encouragement have poured in over the past two months: "You have no idea the effect you have on us as entertainers your energy, your support. It means the world and I truly want to thank you guys for being there for me in my difficult time." 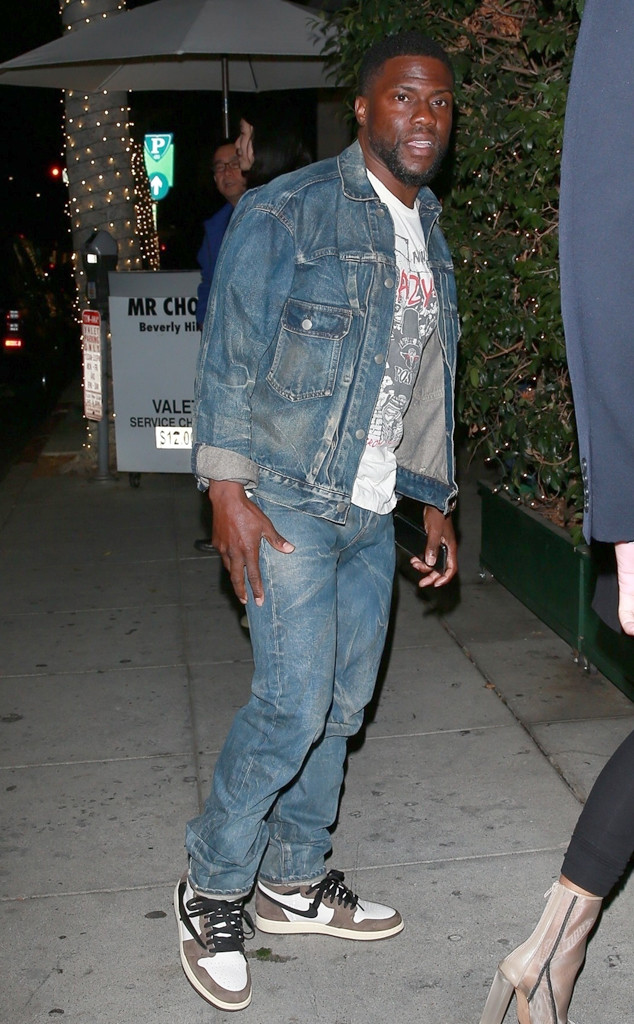 Initial details suggested his road to recovery would look far more treacherous. During the early morning hours of that Labor Day weekend Sunday, he was riding shotgun in his 1970 Plymouth Barracuda (a birthday present to himself he dubbed the "Menace") as pal Jared Stanton Black navigated it through Malibu's winding Mulholland Drive.

When Stanton Black lost control, they rolled through a fence, down an embankment, finally coming to a crash in a ditch. With the roof crushed on impact, Black and his fitness trainer fiancé Rebecca Broxterman had to be cut out of the car; Hart managed to crawl his way out, despite a spine that was fractured in three places.

It was enough for the likes of Jamie Foxx, Mindy Kaling and Bryan Cranston to send their well-wishes, both through social media and, we assume, to the patient himself. And for close pal Dwayne "The Rock" Johnson to cut short his Hawaiian honeymoon with wife Lauren Hashian. His decision was made, in part, to fill-in for his Jumanji: The Next Level costar during his scheduled appearance on The Kelly Clarkson Show, but he also wanted to check in on his "son," the between-friends dig the former pro wrestler uses to needle his pal, who stands 13 inches shorter than his impressive 6-foot-5 bulk. 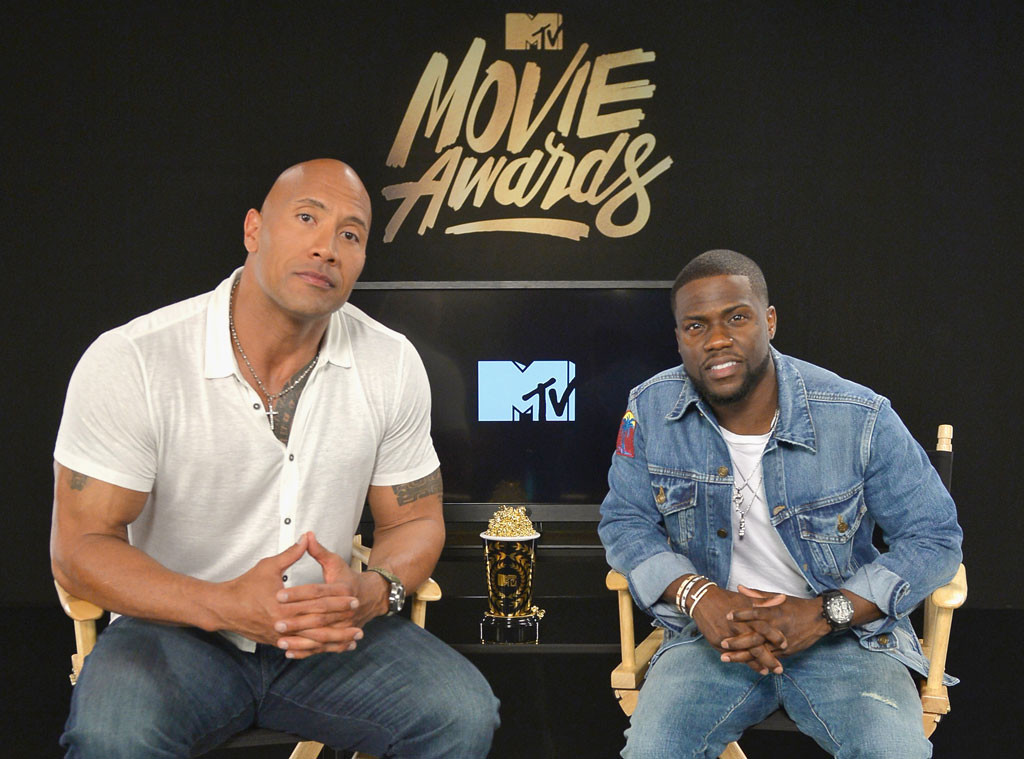 Thankfully he was able to deliver a happy report on air Sept. 9.

"Everything is good," he told Kelly Clarkson. And clearly Hart was doing well enough for Johnson to continue the thread of his joke against his more diminutive pal. "You know what? These things happen in life and thankfully he was strapped in nicely to his car seat. That's real love."

In all seriousness, though, he finished, "It could've been a lot worse. So, he's a lucky man, and he knows it too. I wish him the best and a speedy recovery and I'm gonna see him soon."

Because, by that point, Hart had undergone surgery and dove into the requisite physical therapy that followed. And though doctors told him it would take a year for him to return to full strength, the man who's finished multiple marathons and countless hard AF workout routines is decidedly up to the task.

The Instagram video he shared in late October documenting his recovery, showed the star moving from walker to treadmill thanks to a series of stability exercises, physical therapy treatments and the help of an oft-present back brace.

And, of course, it didn't hurt that Hart has the type of drive and never quit spirit that transformed him from the guy being booed off comedy house stages to the person who claimed a spot on the upper half of Forbes' 2019 list of top 100 celebrity earners

"He's reaching his goals and is getting stronger every day," a source recently shared with E! News. "People are amazed at how far he has come and how hard he is working. He is very dedicated."

Eager to make sure he heals properly, and cognizant of the standard 12-month timeline, his doctors are careful to ensure he doesn't push too hard, "But they give him mini goals and he always reaches them. They are very happy with his progress."

Kinda stunned, to be honest. "He's feeling better every day and will be back faster than anyone could have predicted," said the source. "He has put all of his energy into his rehab and its showing." 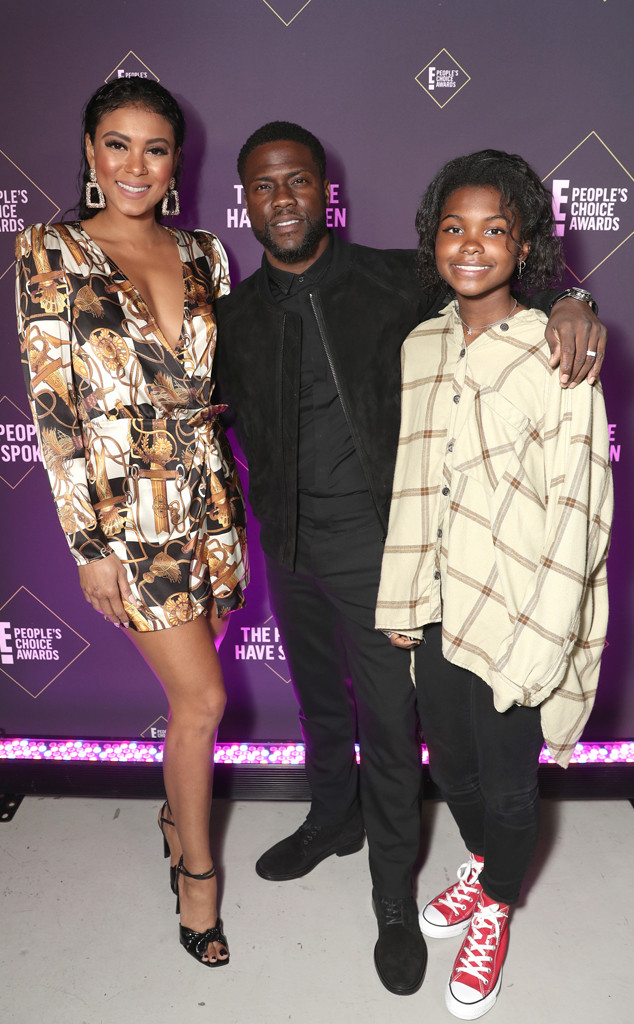 Standing behind him is a crew of cheerleaders, including his wife of three years, his daughter Heaven, 14, and his sons Hendrix, 12, and nearly 2-year-old Kenzo. "He has had family and friends around him throughout his recovery," shared the source. "They are all amazed at how well he is doing and how much progress he has made. He is working very hard to get back to 100 percent."

In some ways he does appear fully recharged, going out to play poker with Jay-Z and getting back on the road with another vintage ride, his 1969 Camaro. And though his attorney said the always hustling multi-hyphenate "doesn't anticipate going back to work full time" until 2020, he has resumed some obligations, returning to his SiriusXM radio show Laugh Out Loud yesterday and keeping his eye trained on the promotional schedule for next month's Jumanji: The Next Level.

"He has all of the Jumanji press coming up on his calendar," says the insider, "and wants to make sure he is part of it." Which, you would expect little else from the man who released three movies this year (some six more are in the works) while also juggling stand-up and producing responsibilities.

That being said, having what the source calls a changed outlook on life, he's content to stop trying to keep so many balls in the air.

"Some of the craziest things that happen to you, end up being the things that you needed most," he shared in his Oct. 29 Instagram video, trying to make sense of what he'd been through. "And, in this case, I honestly feel like God basically told me to sit down. You know, when you're moving too fast and you're doing too much, sometimes you can't see the things that you're meant to see."

Now, though, he shared, "I see things differently. I see life from a whole new perspective. My appreciation for life is through the roof. I'm thankful for my family, my friends. I'm thankful for the people that simply ride with me, have been with me, 'cause you stood by me. My fans—I'm thankful for all your love and support. So, don't take today for granted, 'cause tomorrow's not promised." 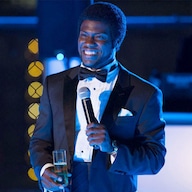 But should it come, he'll embrace it as a chance to grow and improve.