Demi Lovato says she's "in a great place" mentally after battling bipolar disorder and drug and alcohol addiction for years.

The 22-year-old "Heart Attack" singer made her comments on NBC's Today show on Thursday, the day she was named a celebrity spokesperson of the new Be Vocal: Speak Up for Mental Health campaign and two days after she announced she, Nick Jonas and their manager had formed a new record label, Safehouse Records. The singer, who has also battled eating disorders, has talked about her past personal struggles before.

"I've been very open about my story just because that the more honest and open I am, the more people that I'm gonna be able to reach," Lovato said on the Today show. "Mental illnesses, in general, are...not talked about as much as they should."

"I wish that more people could understand from a point where it's not a choice to have an addiction. And with bipolar disorder, it's a chemical imbalance and it's something that you have to figure out your own treatment with your own team and in order to do that, it takes time," she added. "And finally, I'm in a great place where I can say that recovery is possible."

Bipolar disorder is part of my life, but it doesn?t define me. For those struggling with #mentalhealth issues, it?s so important to speak up for yourself and learn how to live well. That?s why I teamed up with key advocacy groups and Sunovion to launch #BeVocalSpeakUp

In 2010, at age 18, she spent time in rehab to treat "emotional and physical issues." She revealed months later that she was diagnosed with bipolar disorder. In 2012, she told Seventeen magazine, "I'm not going to lie. I was self-medicating. I was doing things like drinking and using [drugs], like a lot of teens do to numb their pain."

"On the days that are harder, there's this saying called 'Play the record forward,'" Lovato said on the Today show. "So like, if I ever want to pick up and drink or use, I have to imagine, I have to play it out and imagine, like, 'OK, well, what would happen if I did that?'" 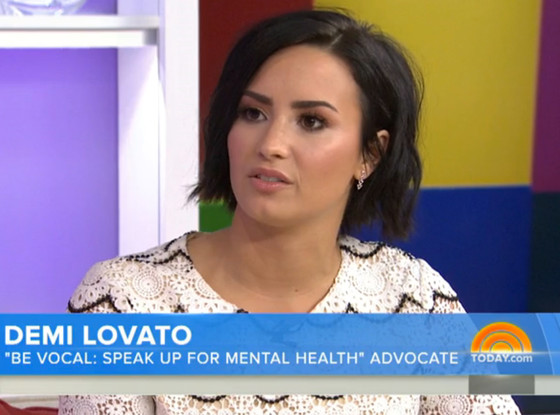 READ: Demi Lovato talks past drug use: "I couldn't go 30 minutes to an hour without cocaine"

In an Instagram post that followed her record label announcement, Lovato had shared a special, heartfelt tribute to her manager and now business partner, Phil McIntyre, who she said saved her life and helped her get sober when she was battling substance addiction. She had also credited boyfriend  Wilmer Valderrama for supporting her throughout her recovery, saying she "wouldn't be alive" without him.

She has also thanked her fans for their support numerous times.

"My fans have really held me accountable," she said on the Today show. "And it's been really incredible to have them as inspirations to stay strong and stay sober as well."

"I feel amazing," she added. "It's definitely changed my life in every single way possible. Yes, I went through a lot of stuff when I was young, but I'm so glad that I did, so that I can, you know, live a longer, happier, healthy life sooner rather than later."

And she's already back in the studio, working on new music. The singer is expected to release a fifth studio album.

"I'm very, very excited. I'm gonna release new music soon and I wish I could say when but I can't yet," Lovato said. "I think it'll be next level. This is like the album where I'm really gonna be able to show people what I can do."

(E! and NBC are part of the NBC Universal family.)

TAGS/ Top Stories , Demi Lovato , Rehab , Health
GET POP CULTURED!
*Email entered incorrectly. Please try again.
By subscribing to our newsletter you agree to the Privacy Policy and Terms of Use
Daily
Weekly