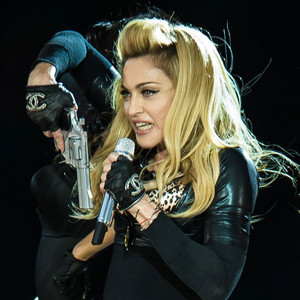 Is it just us or has Madonna seemingly gotten herself into a groove of the never-ending bad PR variety?

The erstwhile Material Girl suffered another blow last night, when, after deciding to end a highly anticipated (and, it follows, costly-ticketed) concert after just 45 minutes and no encore, the fans decided they'd had it, pelting the stage with, well, whatever they had on hand and booing the superstar.

Madonna not facing charges for gun play—but what about those swastikas?!

Madonna's Paris show, which rather ironically was intended to promote tolerance and love at the intimate 2,700-capacity l'Olympia club, was streamed live on YouTube but ended abruptly to cries of "refund" and "salope," the French word for "slut," from the crowd.

The concert was a last-minute addition by Madonna, added to her touring schedule in an attempt to smooth things over with the country's far-right National Front party, who threatened to sue the pop queen for flashing an image of a swastika superimposed on the face of the political party's leader during a concert earlier this month.

"So the next time you want to point the finger at somebody and blame them for a problem in your life, take that finger and point it back at you."

Her message, though well-intentioned, may not have exactly sunk in with the crowd as pretty much every finger in the place was pointed Madonna-ward by the end of the night. And little wonder when tickets for the not-even-hourlong show were going for up to $340. (In the end, Madonna took the stage at 10:15 p.m. and was gone for good by 11 p.m.)

Madonna's latest stunt: holding a gun to her head onstage

Add to that that a hefty portion of the fans had waited outside for hours to secure a spot indoors with some even opting to camp out overnight, and you have some angry fans. Make that, angry, technologically savvy fans.

An invitation that got tweeted out earlier in the day, for fans and attendees to use the #MDNAParis hashtag, quickly backfired, as it was soon taken over by negative fan reaction and outcry. As the concert was also streamed online on YouTube, the video didn't take long to amass far more dislikes than likes (by several thousand), and the comments were disabled as a result.

For her part, Madonna's rep has released a statement on the incident.

"Madonna's Paris club show was planned as her heartfelt thank you to France, which she expressed at the start of her show...The show was not billed as her full MDNA concert and tremendous effort was made to keep the ticket prices reasonable and keep them strictly for her fans. The show cost Madonna close to a million dollars to produce. She has done a handful of club dates in the past and they were never more than 45 minutes. And by the way, she put on a fabulous show which was streamed for millions of fans around the world."

TAGS/ Madonna , Concerts , Top Stories , Controversy , Music
GET POP CULTURED!
*Email entered incorrectly. Please try again.
By subscribing to our newsletter you agree to the Privacy Policy and Terms of Use
Daily
Weekly