Sometimes the most important conversations are started in the unlikeliest of arenas.

The unveiling of the 44th Pirelli Calendar occurred this morning and, once again, the creators have taken the temperature of the feminine landscape and delivered accordingly when it comes to encapsulating what's classic, current and on the horizon all at once.

Leave it to the tire company to roll with the times, right?

A year after breaking its own mold by featuring women of all ages who are famous for their cultural impact rather than how scantily clad they get on their Instagrams, the 2017 Pirelli Calendar is an all-actress (and one professor) edition—and none of the images by famed photographer Peter Lindbergh that made the final cut have been airbrushed or retouched in any way. 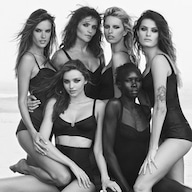 Now, Lindbergh wasn't exactly taking a huge risk by enlisting the likes of Lupita Nyong'o, Julianne Moore, Uma Thurman, Kate Winslet, Nicole Kidman, Robin Wright and other world-class beauties to pose with only the faintest trace of makeup and forego the comfort of knowing that any "flaws" or "imperfections" will be cleaned up in post.

The aesthetic appeal was built in, after all.

But especially now—when brazen criticism of others seems to be at an all-time high, when models are getting body-shamed online for being too curvy and too thin, when the natural act of aging remains one of the biggest hurdles in Hollywood and almost every actress has a story about being asked to slim down for a role—a celebration of women in their natural state is a welcome addition to the conversation about the fact that beauty, as the entertainment and fashion industries spent the last century defining it anyway, is no longer slave to a certain set of parameters.

"The current system promotes only one kind of beauty that is very connected to youth and perfection because it is a system based on consumption, whose idea of beauty doesn't have anything to do with reality and with women," Lindbergh, the first of the who's-who of Pirelli photographers over the years to shoot the calendar for a third time, said in explaining his motivation for 2017.

"I think we need to take a step back and realize that this idea of beauty does not help women and on the contrary makes them unhappy. I want to use the Pirelli platform to send another message and the message is that beauty is much more than what we are used to seeing in commercials."

Commercials, runways, billboards, magazines, TV, movies... Unless your cinematic diet is limited to the most slice-of-life indie dramas, you're seeing variations of the same beauty ideal pretty much everywhere, from the petite actresses that make up the majority of the population onscreen to the busty yet tiny-waisted superheroes and femme fatales on the pages of graphic novels.

It's impossible to alter age-old perceptions overnight, but count Pirelli's latest calendars among the ways in which the fashion industry—the epicenter of which includes the most revered design houses and iconic publications such as Vogue and Harper's Bazaar—has steadily been acknowledging that we know that they know they're selling a fairy tale, rather than a recognizable reflection of most people on earth.

We are onto them.

Various moments over the past year have made it clear that fashion and the entrenched definition of beauty is headed for a long-overdue collision with the real world. 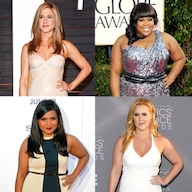 Alicia Keys' embrace of the #NoMakeup movement and her commitment to going au naturel on camera, on stage and on the red carpet. Tim Gunnputting the fashion world on blast for neglecting curvier women. Amy Schumer (a 2016 Pirelli Calendar star) calling out Glamour for vicariously calling her plus-size, which added to the debate about whether we should do away with the term all together and put Amy in the line of fire from Ashley Graham, who wanted to know what was so wrong with being called plus-size anyway.

And seemingly every day we're being apprised of a new instance of body shaming. The high road is packed with female celebrities trying to stay classy in the face of online abuse.

Female actresses and artists of all ages are speaking out about the ongoing issues for women in Hollywood, from ageism to the gender pay gap. And just like when you feel that you're the only one with a certain problem until you speak up and find out that the boat is actually quite crowded, so these stars have learned that they're not alone.

The progress is happening, slowly. For every 10 photo spreads that are touched up to within an inch of their lives, there's a no-makeup feature celebrating natural beauty. For every 15 runway shows where the models couldn't weigh in for a prize fight if they all stood on the scale together, there's a conversation taking place about body diversity and, hopefully, the ways in which the high-fashion fashion industry can better embrace "real women."

Ashley Graham landed the 2016 Sports Illustrated Swimsuit Issue cover, as did UFC star Ronda Rousey, a majorly progressive moment for the male-gaze-driven magazine. But then Cheryl Tiegs expressed concern that Graham's body type didn't look "healthy" enough to have earned such a coveted honor, a reminder that it's hardly just men who have a certain expectation of what a woman should look like.

So, for every series of steps forward, there's a step back. We're not there yet—wherever "there" is, exactly. The slender, wrinkle-and-blemish-free ideal isn't going away anytime soon.

Yet if more iconic publications that helped set the standard in the first place, such as the Pirelli Calendar, are willing (like the Pirelli Calendar) to move forward, to push the boundaries that they set for themselves all those years ago and continue to insist that the definition of beauty evolve, then a wider embrace of the inherent perfection in what's real is within our grasp.