Donald Glover's Most Memorable Acting Roles (and Some You Might've Missed!) 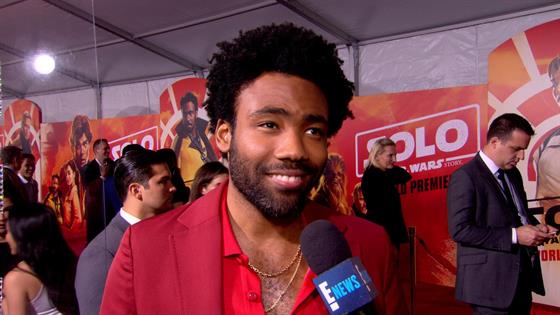 Donald Glover is a jack of all trades and acting is just one of his many talents. He's also a writer, producer, musician, comedian and actor and we love him in all of his forms.

Come this year—this weekend actually—Glover will be starring in Solo: A Star Wars Story and that's going to be just one of his many memorable roles to date. He will also be playing Simba in the upcoming live-action version of The Lion King next year and we are already counting down until its release.

Over the years we've fallen in love with him for his roles on Community and Atlanta and now he's making his movie presence known. He is a badass on screen and behind the camera and we're not worthy of his talents.

Donald Glover Blacked Out When He Made Emmys History

There are plenty of iconic roles that the actor has done over the years and we've got them all below…some of which you might not even remember. Check out Glover's best on-screen roles below and make sure to vote for your favorite.

Glover landed his first big role as a writer and an actor on 30 Rock in 2006 and appeared on a few episodes as a few different minor characters. He went on to write two episodes for the comedy and was the executive story editor on 22 episodes. The rest is pretty much history.

In 2013 the New York University alum appeared on two episodes of Girls as Sandy and we're sad his role wasn't bigger...and longer!

Community is one Glover's biggest roles to date. He landed the part of Tory Barnes in 2009 and fans quickly fell in love with him. He played the goofy character for five seasons until he walked away to focus on his music career and other ventures. Glover's departure from the series left a huge hole because of how loved his silly character became for the show and we're still hoping for a comeback someday.

Atlanta is definitely Glover's claim fame and his most recent success and we're not worthy of this series. The show debuted in 2016 and is based in Atlanta and has won numerous awards. The show has two Golden Globe awards (one of which is for Glover's role on the series) and two Emmy Awards—all in 2017. The FX series is basically his baby, since he's the creator, star, producer and at times director and all his hard work has paid off.

We don't know how you would've missed this, but Glover's was in Magic Mike XXL and it was definitely memorable. The actor and producer was so excited to take part in this film where he played Andre and fans were equally as happy about his appearance. "I am getting down in that. I just wanted to do it. I think a lot of people slept on the first movie, which is actually one of my favorite movies right now," he told The Daily Beast in 2015.

Before landing major movie roles like his Star Wars role and Lion King lead, Glover was in the Oscar-nominated film The Martian. He played Rich Purnell, and although he wasn't a major character he was definitely seen and his presence was known.

In 2017 we got to see Glover in a superhero flick and now we want him to have his own superhero movie. He played Aaron Davis, a career criminal who was working with the film's antagonist in Spider-Man: Homecoming and he was so good at being bad.

On Friday (May 25) Glover will be seen in his biggest movie role yet and we cannot wait for it to finally be a reality. He is playing Lando Calrissian in Solo: A Star Wars Story and he was born to rock this role. You can see him as a part of the Star Wars franchise beginning this week!

Before you see his latest film, or perhaps right after, make sure and vote for Glover's best acting gig thus far below.