It's time for the biggest star-studded music festival of the year!

We got the inside scoop, so check out which celebs were getting the party started early, who was chilling out and who was all about the music... 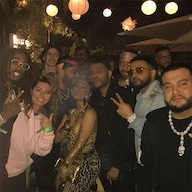 Bey reunited with Destiny's Child again, brought out other familiar faces as guests and debuted new looks as she took the stage for the second time.

The singer took the stage during Kygo's set to perform her new single.

Kygo paid tribute to DJ Avicii, who died that day at age 28.

Kendall Jenner arrived at the #REVOLVEFestival, which was held at the Merv Griffin Estate and took photos at the step and repeat. She was immediately escorted to her cabana. Three large bodyguards surrounded the front of the cabana blocking the public's view of the reality star. Newlywed Emily Ratajkowski joined Kendall in her cabana and they chatted. Kendall and her model pals Jasmine Tookes and Chanel Iman enjoyed the performance and were having a good time.

Riverdale's Camila Mendes arrived with Hart Denton. Later on in the afternoon she was holding hands with a blonde woman and skipping energetically down the sidewalk. She left the party around 7 p.m.

Leonardo DiCaprio arrived towards the end of the party. He tried to be incognito as he roamed the field area near the food and bars.

The singer certainly did not disappoint with her onstage comeback, which featured a Destiny's Child reunion!

21 Savage arrived and was surrounded by security guards. He was escorted to the stage area and hung out in the "rappers' section", where they joined Migos on the side stage.

Leonardo DiCaprio was keeping it low-key and trying to stay under the radar while wearing his typical newscap hat and 3D glasses. He had a VIP table up on the risers that was next to the stage and it was jam packed. He was surrounded by people. Cami Morrone was by his side. Everyone at his table was drinking and dancing, and Leo was very mellow. He was smoking his vape and chilling with all his friends. At one point it was so crowded, security were pushing people out.

Kellen Lutz kept it low-key in a hat and hoodie and was hanging out next to Leo.

Jamie Foxx was hanging out with Diddy at a table. He gave Leo a handshake. Jamie was dancing around and nodding his head to the music. He looked really happy and in high-spirits.

French Montana took the stage around 3 a.m. and everyone was in front of the stage and dancing.

Amber Rose arrived in printed jumpsuit and was with friends. She was roaming around and then was taken to a table. Her ex, 21 Savage, was on the other side of the stage. She looked like she was having a fun time dancing.

Nicole Scherzinger was walking around holding onto to her new boyfriend, Grigor Dimitrov. He was holding her and pulling her out of the crazy crowd.

Kourtney and Younes Bendjima arrived together hand-in hand and were running around the carnival before being escorted to their table. It looked like they wanted to check out the grounds and see what all the games were all about. They didn't try to be under the radar at all and looked like they were having a lot of fun together. Kourtney was smiling a lot. Younes was holding her as they were walking around. At one point and, he was keeping her warm. They were escorted to a table with the owner of 1oak, and were all hanging out. Kourtney was dancing and Younes was by her side the entire time. They were playing heavy hip-hop music and Kourtney seemed really excited about it. They were surrounded by a huge entourage and were next to Leo's table. Kourtney said hi to Blake Griffin who was next to them. 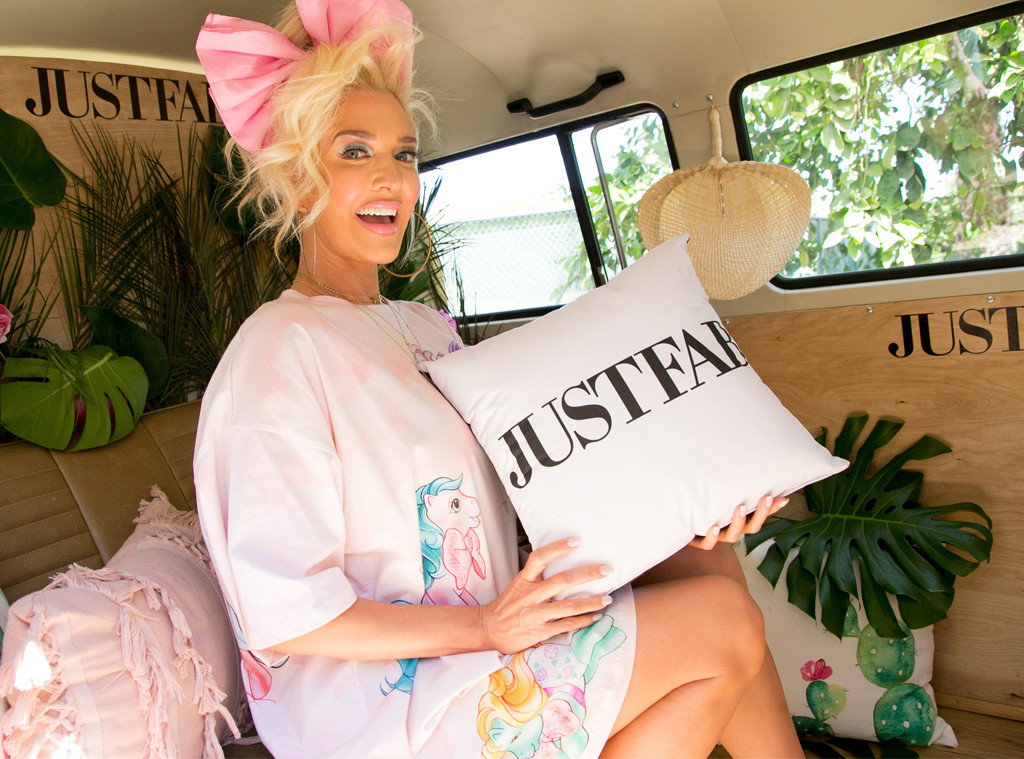 Newlywed Chanel Iman arrived with a girlfriend and was walking around covering her stomach with jacket. She grabbed McDonald's fries and then continued to walk around the estate with her girlfriend.

Real Housewives of Beverly Hills' Teddi Mellencamp arrived with her husband Edwin Arroyave and was running around the party saying hi to everyone.

Amber Rose was wearing sports gear and a cheerleading skirt. She was posing with three men by the PacSun sign on the property. She then made her way to her cabana and was on her phone the entire time looking bored.

Ariel Winter and her boyfriend Levi Meaden were dancing in a cabana together while drinking Absolut vodka. Ariel was dancing and looked like she was having a good time. Her friends were taking selfies with her and she was smiling and looked happy.

Bella Hadid was sitting down in her own cabana with two friends, and was being super casual with her feet up on one of the couches. She was on her phone the whole time.

Brooklyn Beckham and Anwar Hadid were partying together in the same cabana. Anwar was sitting and his girlfriend Nicola Peltz was next to him in the cabana sipping on a McDonald's drink. Gigi Hadid then came over and sat with her in their cabana.  They both looked super bored. Gigi took a bunch of selfies on her phone and was not drinking. She sat with Bella and cuddled the majority of the time.

Lala Kent and her boyfriend Randall Emmett arrived together and were roaming around together. They stopped to say hi to several people and were holding hands. They looked really happy.

Kaia Gerber was at Hailey Baldwin's cabana standing and talking with her. She wore a bucket hat and tried to stay under the radar. She wasn't drinking. Kaia then went to her brother Presley Gerber's cabana and hung out with his friends and Brooklyn for a bit.

Presley and his girlfriend Charlotte D'Alessio were making out inside their cabana. Kaia then came over to hang out with her brother and Brooklyn.

Erika Jayne was roaming around with two male friends. She took photos and was hanging with friends. The reality star also stopped by the JustFab pool party.

Post Malone was in a cabana with Migos smoking a cigarette. They were dancing to Cardi B and singing along.

this is not my outfit

Kylie arrived on Friday with Travis, Kourtney and her boyfriend Younes Bendjima, E! News has learned. There, Kylie debuted a hot pink wig on Instagram, writing, "I'm not a regular mom I'm a cool mom." Kylie and Travis welcomed their first child, daughter Stormi Webster, two and a half months ago.

Kylie, Travis and Kourtney partied with Nicki Minaj, who also posted a photo of herself with other friends, including The Weeknd, French Montana and country star Shania Twain.

Kourtney was also spotted with sister Kendall Jenner, who was accompanied by her friends. The two danced together while surrounded by security. Kourtney stood in front of her boyfriend for the majority of SZA's performance and the two danced together as the singer sang "All the Stars." Kendall rapped along to SZA's set with her friends and danced with Kaia Gerber.

Hailey Bieber was spotted dancing with male friends, who she later left to hang out for a bit with Kendall.

Standing a few feet away from the model was her ex, Justin. The two did not interact. Justin stayed with a group of male friends and was seen dancing as well, as his security team remained nearby. During SZA's performance, the singer remained still and watched intently.

Brooklyn Beckham arrived with a woman and greeted Justin with a handshake. Justin told Victoria Beckham and David Beckham's eldest son, "There's a lot of pretty girls in here."

Justin was in full dancing mode much of the day and was also spotted cheering on 11-year-old Mason Ramsey, a YouTube sensation dubbed the "Walmart Yodel Kid," as he gave a surprise performance during DJ Whethan's set. Justin and the boy later met and took selfies together.

Bella Hadid arrived with three girlfriends and quickly marched her way to the front of the stage to watch SZA.

Wearing a futuristic-looking outfit, Millie was spotted roaming around with three girlfriends and a guy.

Paris sat on a friend's shoulders and rocked out to Kygo's performance. During his set, Jamie Foxx came out on stage for sang "Sexual Healing." He also brought his daughter Corinne Foxx onstage for a moment. 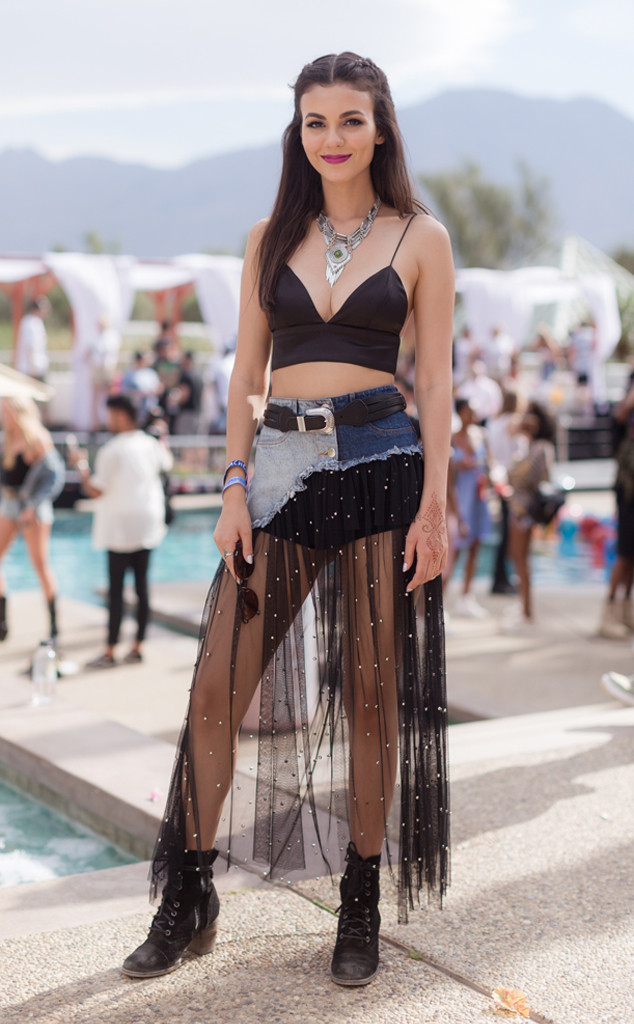 Tyga and Iggy Azalea were seen standing together during The Weeknd's performance, accompanied by security. Tyga, who earlier posted on social media videos of his Coachella rental house, and Kylie were not seen interacting.

Before The Weeknd started his set, Kendall and two of her male friends walked through the artist area with her security guard and the reality star found Kaia and sat down on the ground with her. They got up before he started playing, and Justine then joined them. During The Weeknd's performance, Kendall was seen jumping up and down and rapping with her friends again.

The Weeknd got emotional as he performed "Call Out My Name."

Kim Kardashian's ex-husband and basketball player Kris Humphries was spotted in a VIP section waiting in line for a drink and chatting with The Hills alum Frankie Delgado as well as Blake Griffin, who was later seen roaming around, beer in hand, with a group of friends.

Kylie, Travis and her pals Jordyn Woodsand Justine Skye later attended BMW i's Powered Paradise in the Desert after-party, which the h.wood Group hosted at Poppy nightclub, in partnership with Kylie Cosmetics and BMW i to launch the KYLIE x KOURT collaboration and Pizza Boys Radio on Beats 1. Travis hopped on stage around 3 a.m. and performed, while Kylie watched from the side excitedly. About half an hour later, Diplo, Post Malone and Lil Wayne took the stage.