Taron Egerton, Your New Man Crush, Is About to Take Hollywood by Storm 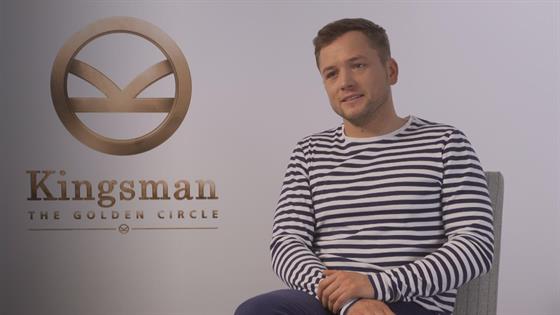 Now Playing
Up Next
Taron Egerton: Our Man Crush...On Their Man Crush

In the winter of 2014, a relatively under-the-radar action flick hit theaters. Kingsman: The Secret Service was, at first glance, another shoot-'em-up spy movie that would draw fans of the Bond movies or anyone who was feeling a particularly strong yearning for something Tom Cruise would do.

It had all the things an audience looks for in an espionage genre flick: A big bad villain looking to take over the world, cool gadgets and unbearably fancy suits. But when opening weekend came around, this one felt different. It acted differently, too, because it went on to garner a whopping $414 million at the box office and it took movie audiences by storm.

It also had all of pop culture asking one very loaded question: Who is Taron Egerton? 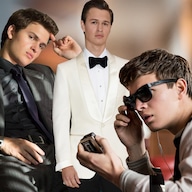 Move Over, Zac Efron! Ansel Elgort Is Ready to Be Hollywood's Next Heartthrob

The actor, who starred in Kingsman as a kid from a rough neighborhood in London who was indoctrinated into the secret spy agency, was beyond a novice: He had never stepped onto a movie set before. The Secret Service was his very first film and to say that he stole the show would be to offensively understate the situation. His portrayal of Eggsy (and, let's face it, the way he looked in a suit) was so popular that we're pretty sure it was almost singlehandedly the reason the studio decided to make a sequel. The people needed more Taron.

And more Taron is exactly what they're going to get—the actor is poised for very very big things this year. This is certainly somebody that everybody needs to get very familiar with, and fast.

To start, this weekend Egerton will be reuniting with his original costars (like Colin Firth) and a slew of new A-listers for the second installment Kingsman: The Golden Circle.

It's a project that he was quite thrilled to return to, and he spoke excitedly about the chance to step back into his breakout role at this summer's Comic-Con.

"Why did I come back? Because I signed a contract that said I had to," he joked before turning serious. "But I would have done it anyways. To be apart of these movies is a dream and it was hugely affirming to have been part of this thing that people like enough to warrant another installment. But it's also quite daunting."

Egerton admitted that sequels are a tricky business. The movie industry is all too familiar with second-time-around syndrome, so director Matthew Vaughn (he of X-Men fame) made sure to start off The Golden Circle by killing off most of the Kingsman agency (everyone but Egerton's character and one other agent) to prove to the audience that the stakes are higher this time around.

Next, he brought in that aforementioned slew of A-listers. Halle Berry, Jeff Bridgesand Channing Tatum play Egerton's American counterparts who are recruited to help get to the bottom of the opening massacre. It means a real treat for fans of the movie (there are Channing-Tatum-western-catchphrases aplenty), but it also presented a unique challenge for the still-newbie Egerton.

"I get starstruck all the time," he told E! News at the film's recent press tour. "Especially in this film. I remember the first time I walked on set with Jeff and Halle and Channing I got so nervous I had to tell myself, you've done months of work on this. You were in the first one! They're the guests."

It's those months of work that are helping to set Taron apart from the rest of the fresh-faced, incredibly talented young actors in Hollywood. The Kingsman movies require a special blend of wit and physical skill to work out those elaborate fight scenes. Who knew that shooting off a briefcase could be so complicated?

Ahead of shooting Egerton spend months and months in training—he did everything from fight choreography to pumping iron to what he described as loads of stretching. And once they arrived to set, they had to spend weeks learning and perfect the fight scenes which take an incredibly long time to shoot. And yes, there were some injuries—an occupational hazard, says the newly-minted spy movie expert.

"I got my hand slammed in a car door," he lists. "Ed [Edward Holcroft] punched me in the face. I think I got kicked in the balls one day as well. But nothing serious, no broken bones."

The actor has spent the last few weeks touring the world on a very impressively large promotional tour for Kingsman (by the flick's big London premiere he had almost completely lost his voice), which has been another chance to introduce people to his rising star power and seal in new (and obsessive) fans. Those screaming young girls are going to come in handy, because he has an impressive slate of upcoming roles as well.

First he'll be seen in this winter's Billionaire Boys Club—a drama about a group of young men in Los Angeles who develop a disastrous get-rich-quick scheme—alongside young bold names like Emma Roberts, Billie Lourdand fellow Zac Efronreplacement-in-waiting Ansel Elgort (Kevin Spacey stars as well). He's signed on to the biopic about Marie Colvin, the foreign war correspondent who was killed while covering the war in Syria (opposite Rosamund Pike). 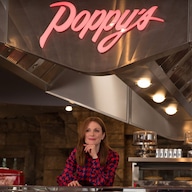 And next fall he'll be playing the lead role in the much-anticipated remake of Robin Hood. Jamie Foxx will play Little John, Jamie Dornanwill play Will Scarlet and the flick itself is being produced by Leonardo DiCaprio's company, so it's safe to say it's a blockbuster. (Egerton described Leo as "hands-off," but he did get to meet him several times and he admits that the man he describes as a "hero" is just as wonderful in person.)

This version of Robin Hood isn't going to be anything like Men in Tights, though.

"It's very stylized, super cool, and quite dark and moody," he explained. "I wear a lot of leather in Robin Hood. There's no feather in the cap."

But one thing that the filmmakers refused to change is...you guessed it...the tights. Taron Egerton will be wearing tights on the big screen, in high def, possibly even on the IMAX. And no, it's not exactly how he drew it up.

"They were pegged as kind of baggy," he says of the costume's infamous bottoms. "And then I came to the first fitting and thought, well someone's pulled these in haven't they? They're not quite tights but they're pretty snug."

You had us at hello, Robin Hood.

With IMDb credits alongside Colin Firth, Halle Berry and Leo, it's hard to imagine where a young actor's career can even go from here. When you've only made a few films and they've all been full of A-listers, some would be tempted to rest on their laurels. But Egerton has a full bucket list for future costars. It contains a litany of acting's greatest talents: Gary Oldman, Emma Thompson and of course Meryl Streep. And if there's a third installment of Kingsman (which, knowing Hollywood, there will be), he already has his suggestion ready.

"I've already said I think Dwayne Johnson would be great in Kingsman," he said. "I think he's quite expensive though."

Maybe if he was willing to swap out his Savile Row tuxedos for tights, though. Then everybody wins.