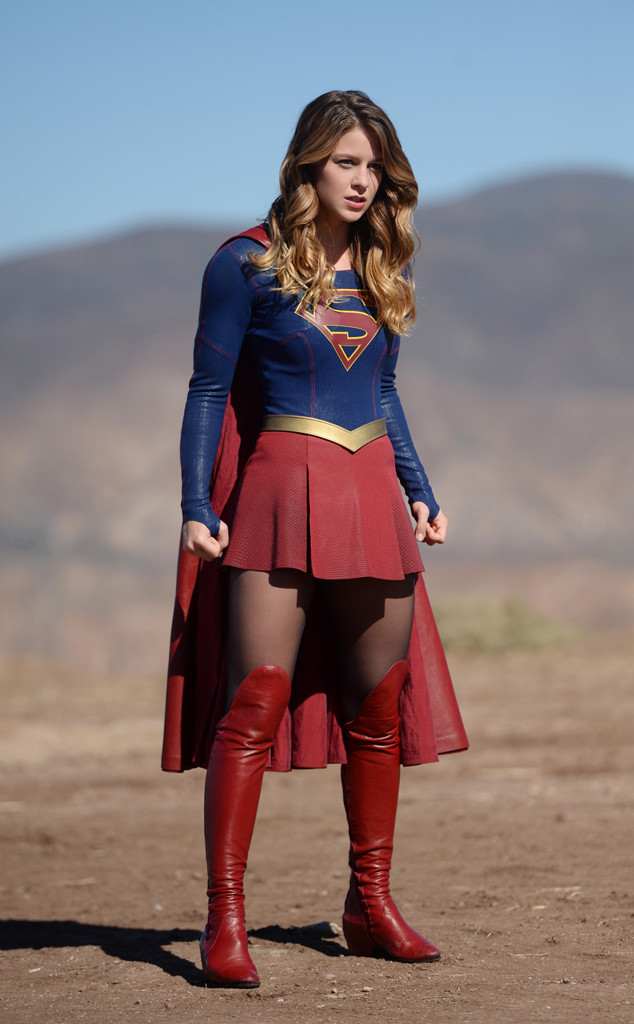 Forget all the think pieces and essays you read about CBS's Supergirl and what it means for the TV landscape. It's Melissa Benoist's turn to tell you what she hopes to accomplish with the show and her titular super role.

"I just would like her journey to be something that any person could relate to and/or be affected by and inspired by. I think part of the draw of the comic book genre is that it is a way to escape and be inspired by something and be something greater than yourself: A strong being that can accomplish the unthinkable," Benoist told E! News. "But also what I love about her is that she struggles and the ebb and flow of her life is really human. I just hope that people can relate to it."

Supergirl is now three episodes in and in production on episode 11, but seeing Benoist take flight still hasn't gotten old (for fans and crew members alike).

"One of the camera operators came up to me…I think we were in episode eight or something, so we had a bunch of episodes under our belts. He came up to me on one of the green screen days and said, 'You know, I've seen you do this so many times now, but it's always exciting. It's always really exhilarating to see you on the camera and look at a girl who looks like she's flying,'" she said. "It does feel that way every time we do it. "

Keep reading for more on what she's learned from playing the superhero, what it's like to meet kids in costume, fighting with her hero, Laura Benanti, and more.

There were all these videos of you doing events with all these young girls. Did any of them say anything to you that really stuck with you?
I put some capes on the girls. It was cool to see, some of them were even kind speechless after watching the pilot and putting the capes on them, I could see the change in their demeanor. They were just excited and kind of in awe that they got to wear a Supergirl cape. But that's kind of been the general response. Especially if I'm wearing the suit and I am around a young girl, I just see more the effect than any of them saying anything to me. They usually get really shy. [Laughs.]

CLICK: Find out what happened the first time the cast saw Melissa in the Supergirl costume 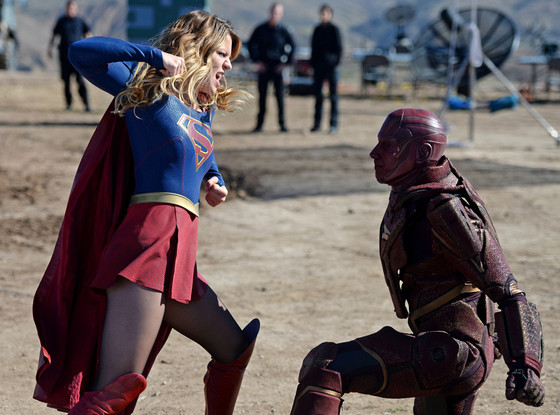 What have you learned about yourself from playing Kara and Supergirl?
This job is really teaching me things. It's forcing me to confront a lot of my fears in terms of confrontation and what that means and how you exhibit strength and power as a woman, but doing it with grace and kindness. That's mostly what I've learned from Kara. And she's insatiably hopeful and positive, even when things feel hopeless. She always has a silver lining in her mind. She always finds a way. That's part of how heroic she is. I definitely feel like that's inspired me. I don't know if I apply it to my day-to-day life, I don't know if I've really gotten a knack for that yet, but it's definitely inspiring.

I hope you weren't afraid of heights—
No. [Laughs.] That was not a fear of mine, thank goodness. 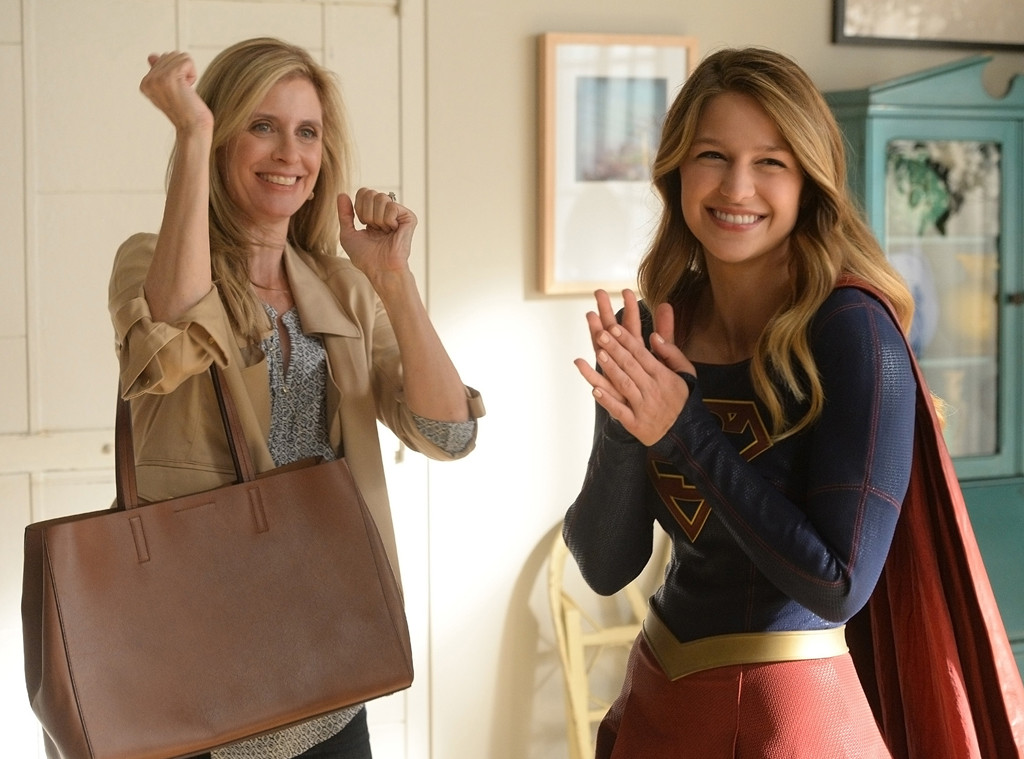 Helen Slater is your adoptive mom on the show and she's still tied to this role 30 years after she starred in the Supergirl movie. Are you prepared for that? This could be your legacy.
Yeah, I definitely feel that weight and I feel that responsibility, really, because the fans—if it's a success and they like you playing the role that they cover so much, that's amazing. I'm excited about that. I think that's a wonderful thing, to reach people that way. It is cool to be around her and Dean Cain and see how it shaped their lives.

Did you talk to her at all about that?
We talked about what kind of training we did. She was on trampolines a lot and dancing and prancing and doing all these cool activities for training. I wish I had that much fun. [Laughs.] I did have a conversation with Dean about it. We were joking about how the Clark Kent and Kara Danvers days were so much easier than the Superman and Supergirl days. He literally is Superman. That guy—one of our PAs witnessed him save someone about to tip over in a golf cart. He really embodies it. I think that's what made both of them these legacies.

Your fight with Laura Benanti in episode two was something else.
Wasn't that cool?!

When you do a lot of the stunt and fight work, is there tension at the end? How do you come back from that?
Oh no, Laura and I make it as fun as possible. I am in love with her. She is amazing. She's a hero of mine, really. I grew up wanting to be on Broadway and be in musical theater and she was it. I thought she was incredible and then getting to work with her, we just have the best time. And that fight, it was hard. It was really tedious and hard to shoot, but we were joking around that Astra's character loves Bonnie Raitt because of the white streak in her hair. We weren't heat visioning each other, that was a staring contest and then when she dragged me across the ground, that was a tickle fight. [Laughs.] We were cracking up the whole day. There's never been any tension, no. I have to get into it, like pump up adrenaline, but never true animosity. 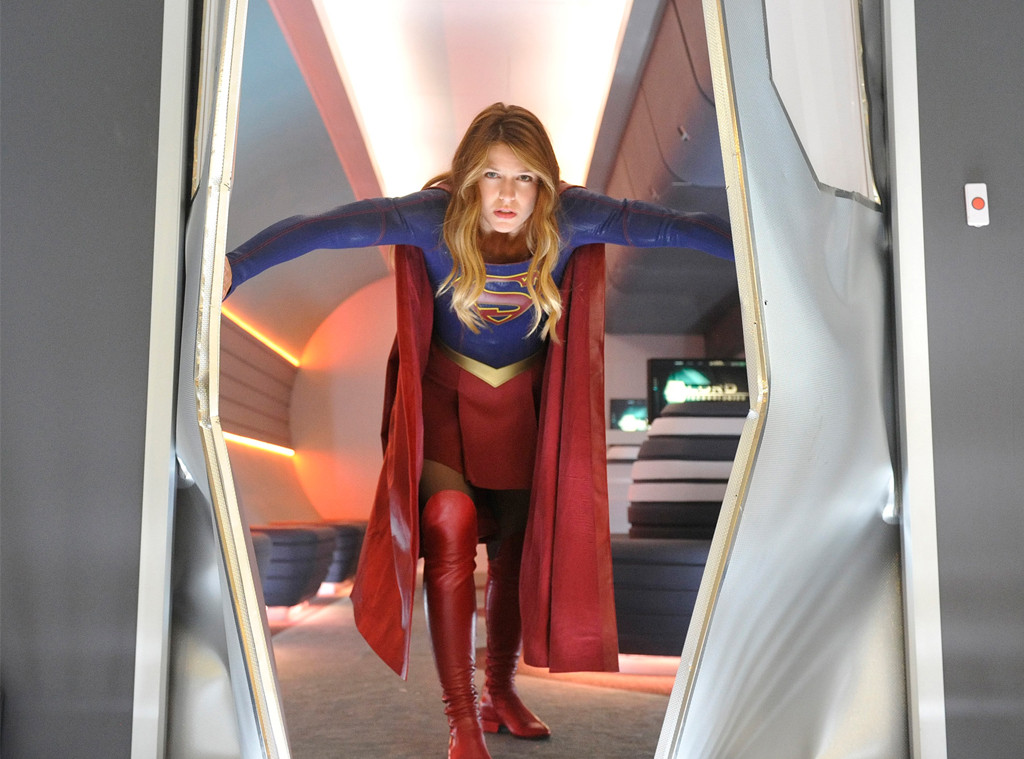 That totally makes sense. It never occurred to me that when you're doing your heat vision or the breath you probably have to keep yourself from laughing.
Uh, yes. We couldn't, actually, for a long time. We were trying not to laugh because you're literally just staring and walking with effort. [Laughs.] It's very funny...when I saw playback of that fight, I kind of saw bits and pieces of it cut together, I said to the people around who I was with, 'People are going to lose their minds. This looks amazing.'

You mentioned Laura being a hero of yours. With you and her on set and with Jeremy, there has to be some kind of sing-alongs that you do, right?
They're never planned! But we, everyone—and not even just the people who are musical theater buffs—but everyone is very goofy, we have a good time.

CLICK: Find out who Jenna Dewan-Tatum is playing on Supergirl

This has been mentioned before: Netflix has Marvel's Jessica Jones coming out and it just feels like people are very ready for these female heroes. What do you think it is about the climate that's changed so the public is ready and accepting?
Well, I don't know how to pinpoint that. I think that women have always been strong and have always been ready for this. The climate, I think maybe, more are speaking out. You've got shows like Girls and Lena Dunham and Hunger Games and things like that and also it's just been way too long. It's been way too long that it's only been this massive amount of male-driven superhero movies and TV shows and it's such a broad universe, the comic book world, why not explore the female stories? They have a different kind of depth to them because of the female element. There are different things to explore. 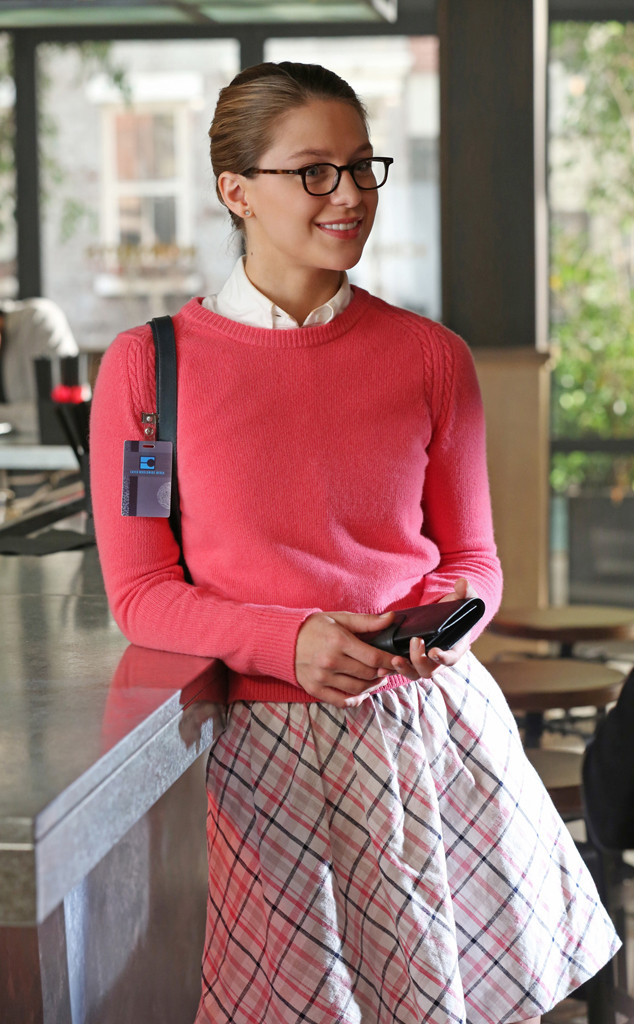 Even in the comic book world there are tons more female-driven titles now. There's definitely a huge, changing tide. It's so cool to see it, finally.
Yeah, yeah. I just saw—What's the female Spider-Man? Gwen?

It's Gwen Stacy, they call her Spider-Gwen.
Spider-Gwen! The art on those comic books, first of all, is beautiful. The covers are gorgeous, the illustrations. I was at a place, a location we were filming at, and there were tons of booths of comic books and the amount of female comic books on display—there were a lot of them. That was really cool to see.

What's coming up?
You're definitely going to see Supergirl and Kara change a lot just in a matter of 10 episodes. We just started filming 11 and I kind of had this moment where I stopped and thought about how much the character has changed in such a short amount of time. I hope people really respond to it.