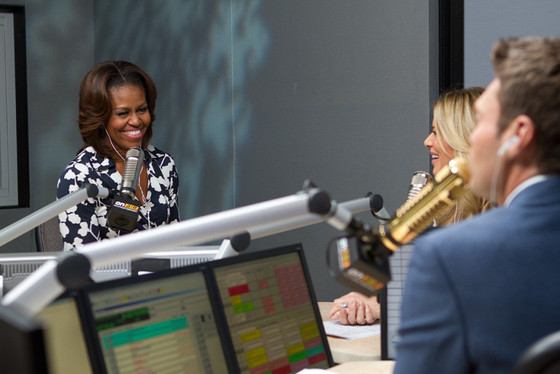 It seems that Michelle Obama is always on the move.

And we're not just talking about the first lady's Let's Move campaign, her initiative to help fight child obesity, but we're also referring to her busy lifestyle which is always jam-packed thanks to having two kids, working to make a difference in the world and being married to President Barack Obama.

Looking stunning in a black-and-white Diane Von Furstenberg wrap dress, the 50-year-old FLOTUS stopped by On Air With Ryan Seacrest on Thursday, Jan. 30, in honor of the four-year anniversary of her Let's Move campaign, where she also shared secrets about her personal life, including her own exercise regime (how does she get those enviable biceps?!), her Valentine's Day plans with her hubby of 21 years and how she and Barack are approaching the subject of daughter's Sasha and Malia's dating life.

First up, Mrs. Obama isn't just the face behind her Let's Move campaign, she also practices what she preaches and ensures that her entire family is dedicated to an active lifestyle.

"With regard to physical activity, we've always, since the time they were little, put them in activities as much as possible," she says of her daughters, Malia, 15, and Sasha, 12. "They've always had to do a team sport, as well as an individual sport, and they see us working out every morning. Barack and I work out together every single morning."

So how does the first lady work up a sweat? "I get up in the morning, usually either right before the kids go to school or right after, and I do about an hour and a half workout. I try to do 45 minutes of cardio and then whatever I'm doing that day," she revealed, admitting she occasionally falls off the wagon (although it doesn't sound like it happens too often!).

There's no doubt her commitment to a healthy lifestyle has paid off as Michelle looks better than ever, most recently dazzling in a forest green ensemble by Azzedine Alaïa while President Obama delivered his fifth State of the Union address on Tuesday, Jan. 28.

And turns out, the 50-year-old beauty, who celebrated her milestone birthday earlier this month feels better than ever, too.

NEWS: Why Michelle Obama's Green Alaïa State of the Union Dress Is Causing a Stir 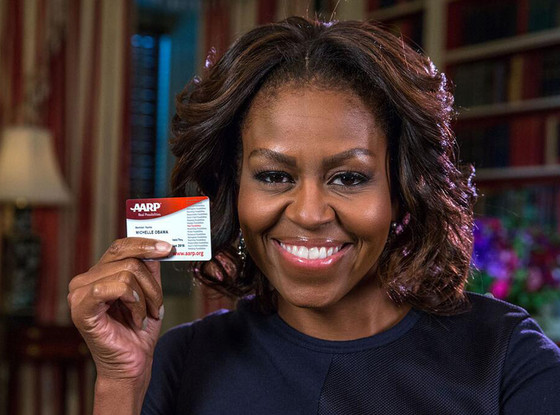 "You're more confident, you know yourself more, you're not concerned about what other people think," she says of growing older. "And if you've taken care of your health, many times you can be in the best shape you've been in…You watch your kids grow up and I know, my girls, they're starting to become real people with opinions and it's just so much fun to talk to them now."

Her two daughters are also growing up as well, and while Barack and Michelle have worked very hard to ensure their children "lead as normal a life as possible" there is one big obstacle they have yet to encounter: dating.

But he just may end up being a softie, considering the POTUS is quite the romantic, although the longtime lovebirds don't have any big plans for Valentine's Day—yet. 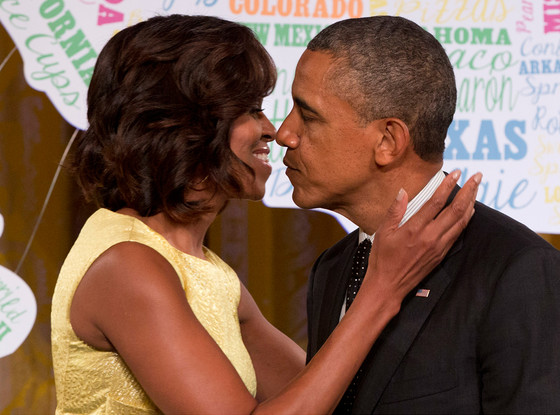 "This year, again, I've had this big birthday celebration—my husband really celebrated me so well—he did a great job. I had a great couple of weeks, so I think we're going to low-key it for Valentine's Day," she revealed. "We have been married for 21 years and he never forgets a Valentine's Day, an anniversary, a birthday. He's really good at that kind of stuff."

But most importantly, does she watch Scandal?!

"I hadn't watched it until this past vacation and we went to Hawaii…so [we] had a long flight [and] I watched all the seasons," she shared. "I love Kerry Washington. She is amazing, so it makes the show fun."