Will, Kate, Harry and the Skydiving Queen: The 15 Greatest Royal Moments From the Olympic Games 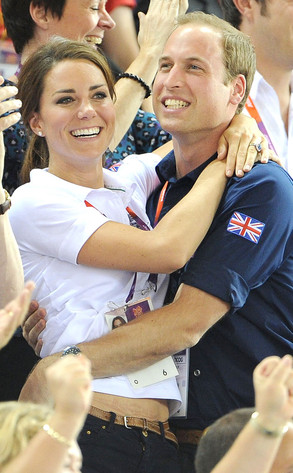 All good things must come to an end, and after 17 glorious days of Britishisms, Bob Costas, talk of grills and, yes, the odd athletic competition or two, the 2012 London Olympics have wrapped up.

And while time will tell which sports stars will break out in the wake of the games and make themselves more permanent fixtures in pop culture (we're looking at you, Lochte), let's not forget the other big stars of these Olympic games.

We speak, of course, of the royal family. After all, who among us can forget where they were when they first saw the Prince William and Kate Middleton's overenthusiastic embrace? Or Prince Harry's impromptu cuddlefest? Or, the pièce de résistance, Queen Elizabeth II brushing past James Bond and jumping out of an airplane (and into our hearts) during the opening ceremonies? Let's relive the magic together—here are, in no particular order, the 15 greatest royal moments from the Olympics:

1. Will and Kate Hug It Out: It was truly the hug heard round the world. Well, maybe it wasn't so much the hug that got heard as the millions of royalists squealing as one that contributed to the decibel count. In any case, the duke and duchess, along with the rest of the fans in the stands, were so overcome with emotion that they actually jumped up and embraced. Sure, it may not sound like such an earth-shattering moment of PDA, but when two chaste kisses at their wedding constituted the most physical contact we'd ever previously seen on display, well, the world took notice.

2. Proving Their Mettle Medal: Purple may be the color of the royal family, but they may want to reconsider a change to a more metallic hue. That's because Will, Kate and Harry were all on hand when Team GB took home their first gold of their home Olympic games, cheering on the female rowers at no less a venue than the one situated beside the boys' alma mater, Eton Dorney.

Check out the cutest photo of Prince Harry ever to exist. Ever. 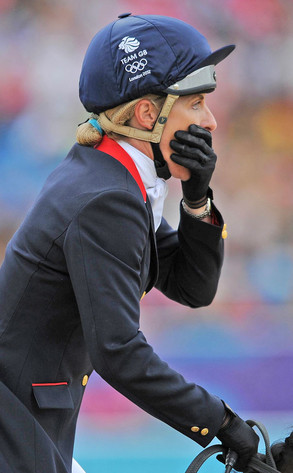 3. Zara Phillips Wins Silver: Sure, when it came to the royal family and the Olympics, Will, Kate, Harry and Liz dominated the past two weeks of headlines, but we'd be more than remiss if we didn't mention the sole member of the royal family who actually competed in the games. And not only competed, but managed to medal. The princes' cousin Zara earned a silver medal along with Team GB's equestrian squad for their second-place finish in the Eventing Team Jumping Competition.

4. First Ladies of Fashion: Michelle Obama and Kate Middleton got the games off to a glamorous start, once again proving why they're the darlings of the fashion world, when they joined sartorial forces at a launch party for heads of state at Buckingham Palace.

5. If the Shoe Fits...: Wear it. And then wear it again. And again. And a couple more times after that. And once or twice more for good measure. Which is exactly what Kate did during these games, and just one more reason why she's the people's duchess.

What did Justin Bieber diss about Prince William's appearance? 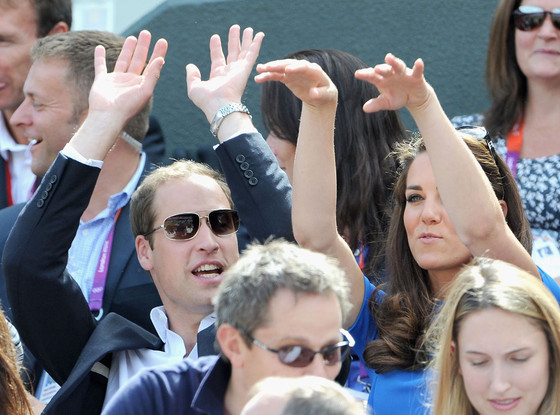 6. Do the Wave: They got spirit, yes they do. Specifically, spirit fingers. Will and Kate got well caught up in the enthusiasm of the games, joining in on several rounds of the wave while cheering on Andy Murray in his quarterfinal game. It might've been just what he needed, as he went on to ultimately take the gold.

7. Pip, Pip, Cheer, Yo: Harry valiantly made the cheering rounds, as did Will (at least for the first week of the games, before he resumed work), but Kate certainly wins for most overbooked royal spectator. Not that any of the athletes were complaining. She not only met with Team USA's Fab Five gold medal-winning women's gymnastics team but her own Team GB when she stopped by the Olympic Village.

8. Horse Play: Will and Harry didn't compete in the games like their cousin Zara, but they did saddle up and take part in a charity polo match while the games were afoot. All proceeds benefited the boys' favorite organizations. 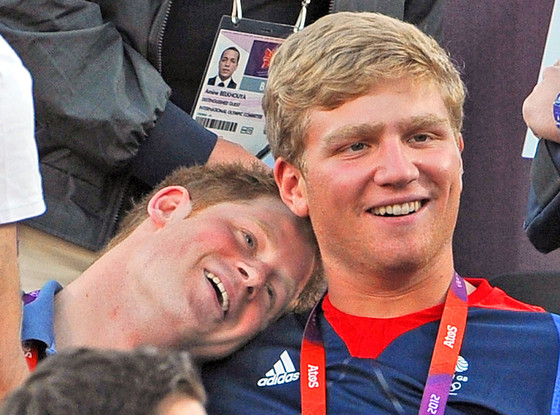 9. Prince Harry's Impromptu Cuddlefest: Seriously, do we even need to explain why this candidly adorable shot of Harry and British gold medalist rower Constantine Louloudis was one of the greatest moments of the Olympics? We didn't think so.

10. Posh and Sporty: David Beckham was nearly as frequent a presence in the stands as the royals, so it was only natural that they cross paths eventually, and Becks did just that when he joined Prince William for the inaugural match of the England soccer squad.

11. A Real Nail-Biter: No one can be poised all the time, and Kate proved that when she decided to take the term "nail-biter" to heart and was spotted giving her cuticles a real workout while watching a particularly tense hurdle race. 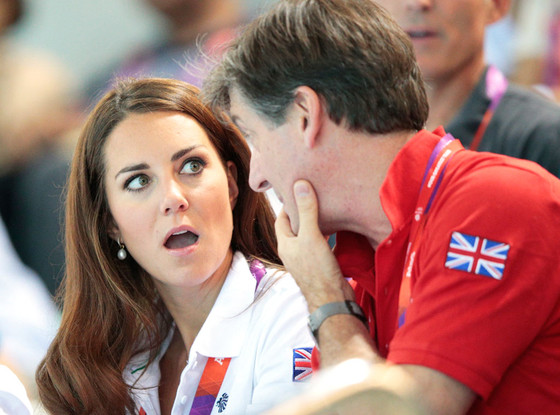 12. Shock and Awe: That thing we said about no one being able to be perfectly composed all the time? Let's call this exhibit B. Come on, Internet. McKayla Maroney is going to be doubly unimpressed that this great shot of the duchess at a synchronized swimming event didn't make it into a meme.

13. The Great Transformation: Sure, it was polo shirts, windbreakers and skinny jeans by day, but by night, the duchess pulled out all the stops, truly bringing a glamorous royal touch to the Olympic party scene when she dropped by the GREAT reception, which aimed to promote Britain's arts and culture scene. Uh, it worked. 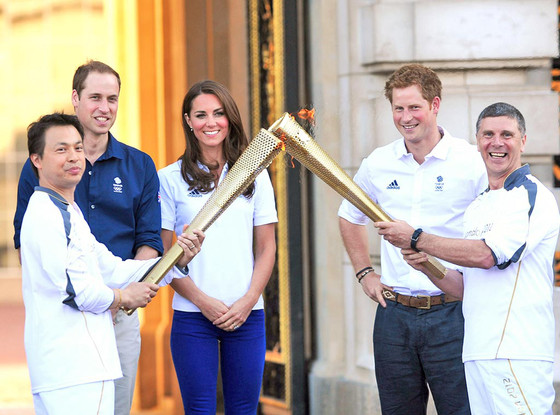 14. Carrying a Torch: Or rather, the torch. Will, Kate and Harry let the games begin, but not before standing to full attention outside of Buckingham Palace to greet the Olympic torch (and the athlete carrying it) as the flame made its way through the final leg of its journey to Olympic Stadium.

15. The Name's Windsor. Liz Windsor: For years the media has been fed stories about how the queen may look stern and slightly (or not so slightly) cold, but is really a barrel of laughs with a sense of humor to die for behind closed doors. Well, they finally made good on those claims when Queen Elizabeth not only appeared in a pretaped scene with none other than James Bond himself, but proceeded to gamely allow a stuntman to dress like her, board a helicopter and proceed to parachute down into Olympic Stadium in the middle of the opening ceremonies. All right, Your Majesty. We bow to that. 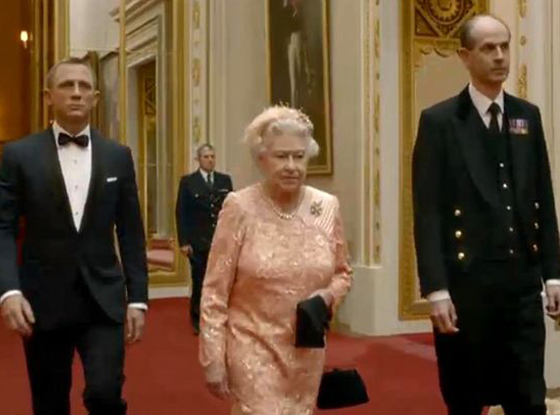 Want more of Will, Kate and Harry? Check out our gallery of Royals at the Olympics!