As Taylor Swift told Rolling Stone, "That's how all of this started, a stupid phone call I shouldn't have picked up."

That infamous phone call—one she played off of on her 2017 track, "Look What You Made Me Do"—is the one she had with Kanye West about lyrics on his 2016 song, "Famous." As fans can recall, Kim Kardashian shared footage of that phone call publicly on Snapchat, in which the rapper shared the line, "To all my southside n----s that know me best, I feel like me and Taylor might still have sex," with the songstress. "I really appreciate you telling me about it. That's really nice," she told West at the time, according to the footage.

The reality star's posting spurred Swift to respond with her side of the story, firing back about his line, "I made that bitch famous.'"

"Where in the video of Kanye telling me he was going to call me 'that bitch' in his song? It doesn't exist because it never happened. You don't get to control someone's emotional response to being called 'that bitch' in front of the entire world," she wrote in a since-deleted Instagram statement. "Of course I wanted to like the song. I wanted to believe Kanye when he told me that I would love the song."

The sequence of events reignited their feud and Swift retreated mostly from the spotlight until the summer of 2017, when she ushered in a new musical era with the release of "Look What You Made Me Do"

Looking back on how things unfolded from three years ago, according to Swift, there's more to the story.

"The world didn't understand the context and the events that led up to it," she told Rolling Stone for the October issue. "Because nothing ever just happens like that without some lead-up. Some events took place to cause me to be pissed off when he called me a bitch. That was not just a singular event. Basically, I got really sick of the dynamic between he and I. And that wasn't just based on what happened on that phone call and with that song—it was kind of a chain reaction of things."

Reflecting on that time, Swift told Rolling Stone, "I started to feel like we reconnected, which felt great for me—because all I ever wanted my whole career after that thing happened in 2009 was for him to respect me. When someone doesn't respect you so loudly and says you literally don't deserve to be here—I just so badly wanted that respect from him, and I hate that about myself, that I was like, 'This guy who's antagonizing me, I just want his approval.' But that's where I was. And so we'd go to dinner and stuff. And I was so happy, because he would say really nice things about my music. It just felt like I was healing some childhood rejection or something from when I was 19." 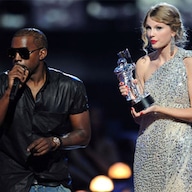 A History of Kanye West's Feuds: From George W. Bush to Taylor Swift

Then, ahead of the 2015 MTV Video Music Awards, the songstress told the magazine West called her and asked her to present the Video Vanguard Award to him.

"We had maybe over an hourlong conversation, and he's like, 'I really, really would like for you to present this Vanguard Award to me, this would mean so much to me,' and went into all the reasons why it means so much, because he can be so sweet. He can be the sweetest. And I was so stoked that he asked me that. And so I wrote this speech up, and then we get to the VMAs and I make this speech and he screams, 'MTV got Taylor Swift up here to present me this award for ratings!'" However, West actually said, "You know how many times they announced Taylor was going to give me the award 'cause it got them more ratings?" as a criticism of MTV. 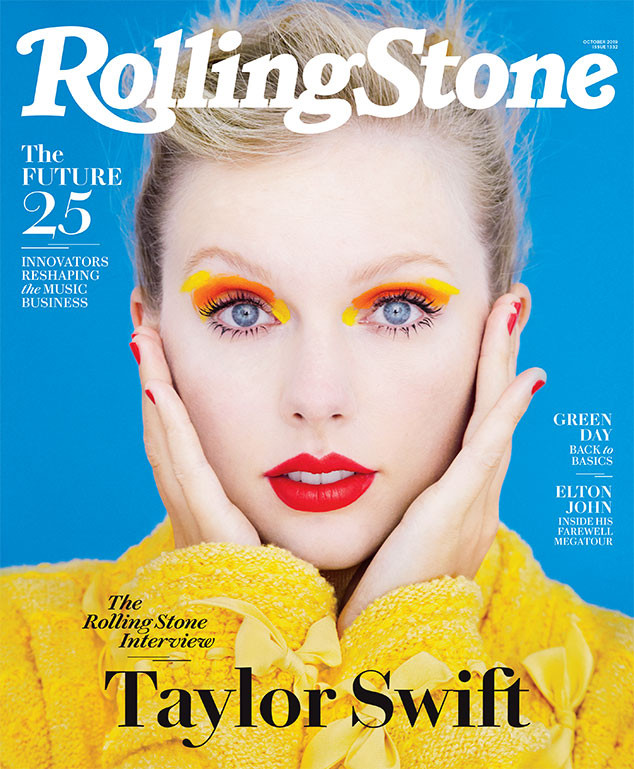 Meanwhile, Swift remembered it differently. "I'm standing in the audience with my arm around his wife, and this chill ran through my body," she described to Rolling Stone. "I realized he is so two-faced. That he wants to be nice to me behind the scenes, but then he wants to look cool, get up in front of everyone and talk s&!t. And I was so upset. He wanted me to come talk to him after the event in his dressing room. I wouldn't go. So then he sent this big, big thing of flowers the next day to apologize. And I was like, 'You know what? I really don't want us to be on bad terms again. So whatever, I'm just going to move past this.' So when he gets on the phone with me, and I was so touched that he would be respectful and, like, tell me about this one line in the song."

While she thought they were "back on good terms," after she heard the final song, there was a shift. "I was like, 'I'm done with this. If you want to be on bad terms, let's be on bad terms, but just be real about it.'" E! News has reached out to West's side for comment on Swift's remarks.

The star then raised the subject of Drake and Pusha T's diss track drama and Drake's claim that Pusha T learned about his son through Kanye West, who produced Pusha T's album, Daytona. Both Pusha T and West denied the allegation.

The October issue of Rolling Stone hits newsstands on Oct. 1.