Shawn Mendes certainly had a 21st birthday to remember!

The singer celebrated the milestone on Thursday night at a party at Harriet's Rooftop & Lounge at the 1 Hotel Brooklyn Bridge with rumored girlfriend and "Señorita" duet partner Camila Cabello and friends.

Mendes and Cabello, 22, were filmed sharing a passionate kiss at the bash, as seen in a video posted on Instagram.

"Shawn held a party last night for his closest group of friends. It was very low key but he did get loose with his friends," a source told E! News. "Shawn and Camila arrived together holding hands and everyone inside cheered for them as they walked in."

"There were several beer pong tables set up that all said 'SM21' on them with matching 'SM21' pong balls," the source said. "Shawn was having fun playing beer pong with his friends and had a smile on his face the entire night. Camila was by his side the majority of the night and they looked really cute together. They took photos together and were on the beer pong table together at one point. Camila also planted a huge kiss on Shawn during the night and it was super cute."

Others clips show Mendes dancing and also telling the crowd, "I'm too drunk to give a speech right now, I can't do it...I'm sorry. I love you guys."

"Shawn popped a bottle of champagne and his friends cheered for him close to the end of the night," the source said. "A birthday cake was brought out for him with candles and the cake was a 'hospitality rider' theme. Camila and Shawn left together around 12:30. No one seemed too drunk or out of hand. It wasn't a wild party but Shawn looked like he had a lot of fun seeing his friends."

Hours earlier, he and Cabello were spotted at the members-only club DUMBO House. In the morning, the pair was seen on a breakfast date at the Jack's Wife Freda bistro.

On Friday, she posted on her Instagram page an undated photo of her and Mendes, writing, "Happy birthday to this magic human, I love you!!!!❤️❤️❤️❤️"

Happy birthday to this magic human, I love you!!!!❤️❤️❤️❤️

Mendes and Cabello first sparked dating rumors in early July and appeared to confirm a romance with some ocean PDA weeks later.

On Wednesday, the two were spotted strolling and laughing together in New York City.

Mendes is enjoying a few days off until he resumes his tour on Saturday in Newark, New Jersey. 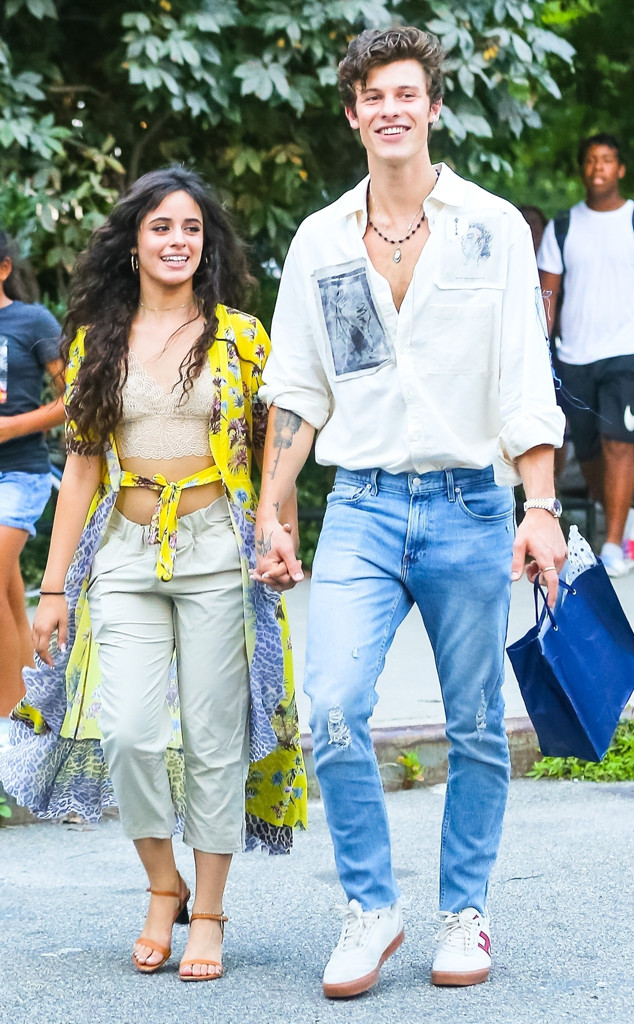 Cabello has attended several of his shows, and has also brought along her family.

"It already feels to them like they've been together for a lot longer than they have," a source told E! News in July. "They've known each other and been a part of each other's lives for a while so it's all very natural and moving quickly."

"Neither of them want to be away from each other," the source continued. "She has the opportunity to be there with him and she's taking it."