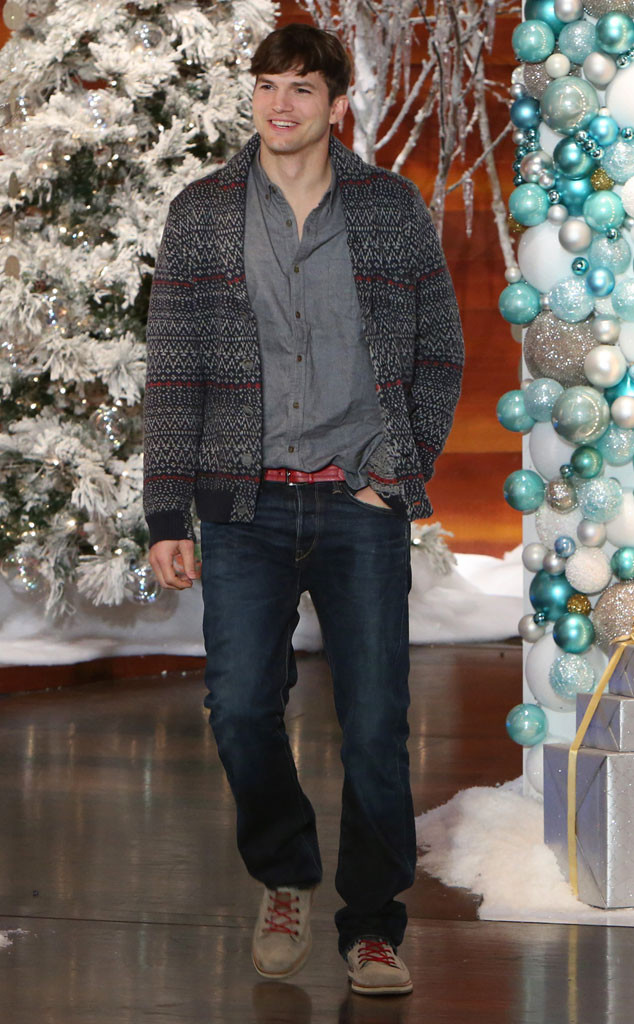 Fatherhood is everything Ashton Kutcher dreamed it would be—and more!

The Two and a Half Men star cooed over his 2-month old daughter, Wyatt Isabelle Kutcher, when he stopped by The Ellen DeGeneres Show Friday. "It's just [Mila Kunis] and you taking care of the baby?" host Ellen DeGeneres asked. Kutcher replied, "Yes, just the two of us. It's awesome. It's unbelievable."

The engaged actors could certainly afford to hire help, but they'd rather not do that. "We just want to know our kid," Kutcher said. "We want to be the people that know what to do when the baby's crying to make the baby not cry anymore. We want to know when she makes a little face or something. We want to be emotionally in touch with her, and I think the only way to do that is by being the one who's there."

Kutcher admitted that life with a newborn "incredible," saying, "When you first get them it's, you're all excited and you're ready to do all these things. And then you realize it's like getting a new cell phone where all the features don't work yet. It's like a phone that won't take pictures and you're like, 'Why won't my phone take pictures?' And it won't make calls and it doesn't do a lot, but it looks really cute."

The proud papa is in awe of his little girl—and she's pretty in awe of herself, too! "She found herself in the mirror and realized she was able to control the thing in the mirror," the 36-year-old TV star recalled.

NEWS: Ashton Kutcher explains how Wyatt Isabelle got her name

"It was just pretty cool," he added. "But the most amazing thing about having a baby is my partner, Mila. She's the greatest mom—I can't even! Like, I go to work every day and I come home and she's perfect.  And it just seems like everything went amazing. And I know that something probably didn't go amazing, but she never complains. It's unbelievable. She's incredible." Asked what's surprised him most about fatherhood, an emotional Kutcher paused and replied, "It's just how much you can love another person. You think you know how much you can love another person and then you have a child and you realize you didn't know. It's infinitely rewarding. There's a great quote by Carlos Slim. He said, 'Most people think they need to make a better world for their children, but the reality is we need to make better children for our world." I try to live by that. I really look at this as the greatest opportunity of my life."

NEWS: A timeline of Mila Kunis and Ashton Kutcher's romance

The parents have been homebodies since their daughter's arrival—and for good reason. The two are often trailed by photographers, and they want to shield Wyatt from the paparazzi. "We got a lot of gifts from people who are super generous," Kutcher said. "We've got all these cool toys and we don't get to use them all. I would like to just use the stroller once, but we don't get to go to the mall and just stroll. I have assembled a lot of things that we haven't gotten to use yet. I'm just assembling things, Ellen!"

So, what does the couple do at home? "I've watched more television than I've ever watched in the last couple months. We started watching The Voice. It's amazing! Those people are so talented. They are so talented, these kids," Kutcher said. "We have funny conversations, like, 'God, didn't [Gwen Stefani] look pretty tonight?' We feel like we're friends with Gwen, and that's fun. We started watching this show called Utopia. I think we were the only ones in America who were watching it, because I'd try to engage friends, like, 'Oh, did you see Utopia?' and they were like, 'No, we didn't. That's not one of the cool shows.' It got canceled. That was like the first show that I really loved watch that got canceled."

"Remember when Becky disappeared from Roseanne?" he asked. "It was like that. She's just gone."