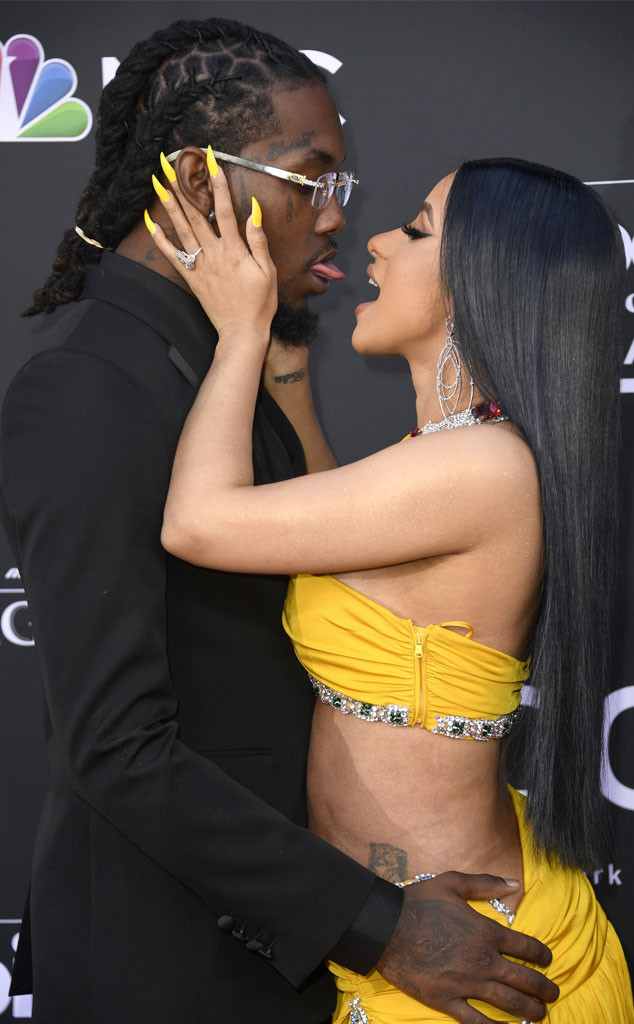 Cardi B and Offset stopped the show as they arrived hand-in-hand at the 2019 Billboard Music Awards.

The couple walked the red carpet together at the awards show, which is one of the few main public appearances they've made together since reconciling their marriage. Nothing can ever really come close to her fashion statement on the carpet before the 2019 Grammys, but their arrival tonight comes in at a close second.

Cardi stunned when she arrived in a two-piece yellow skirt-top combo designed by Moschino and Giuseppe Zanotti stilettos. The outfit had diamonds on the collar and lining the bottom of her bra-like top. Cardi's flawless and toned abs were on full display here. Her skirt was also lined in diamonds and had a huge slit going up her leg. Offset, well, offset the look in a black suit and black shirt. In typical Cardi fashion, she paired the outfit with bright yellow nails and her diamond wedding ring.

At one point, the married couple turned the red carpet into something of a rated-R moment when she stuck her tongue out at her husband and they licked each other. It appears that could be their signature move because the lovebirds did essentially the same PDA moment at the Grammys.

The "Bodak Yellow" rapper is sure to have a big night tonight at the Billboard Music Awards.

2019 Billboard Music Awards By the Numbers

She's nominated for 21 (yes, you read that correctly: 21) awards including Top Female Artist, Top Artist, Top 100 Song (she has two songs in this category) as well as Top Rap Artist. Cardi leads the pack with her 20-plus nominations while Drake and Post Malone are tied for second with 17 nominations apiece.

The married couple have prime seats for the show at the MGM Grand Garden Arena. They're seated in the front row alongside Khalid and right in front of Kumail Nanjiani and Paula Abdul.

Cardi's plentiful nominations come on the heels of her very historic win at the Grammys in February when she won the Best Rap Album category. Offset joined the award winner onstage and she thanked him for his support and encouragement to have her finish her album Invasion of Privacy even though she was pregnant with their daughter Kulture Kiari Cephus.

So this happened. #BBMAs pic.twitter.com/eJw34SLmlD

Cardi and the Migos rapper are back to packing on the PDA after their very public split that she announced on Instagram. A source told E! News at the time that they were "fighting a lot" and she "ultimately lost trust in their relationship." Cardi had questioned Offset's loyalty and there were rumors he was unfaithful. 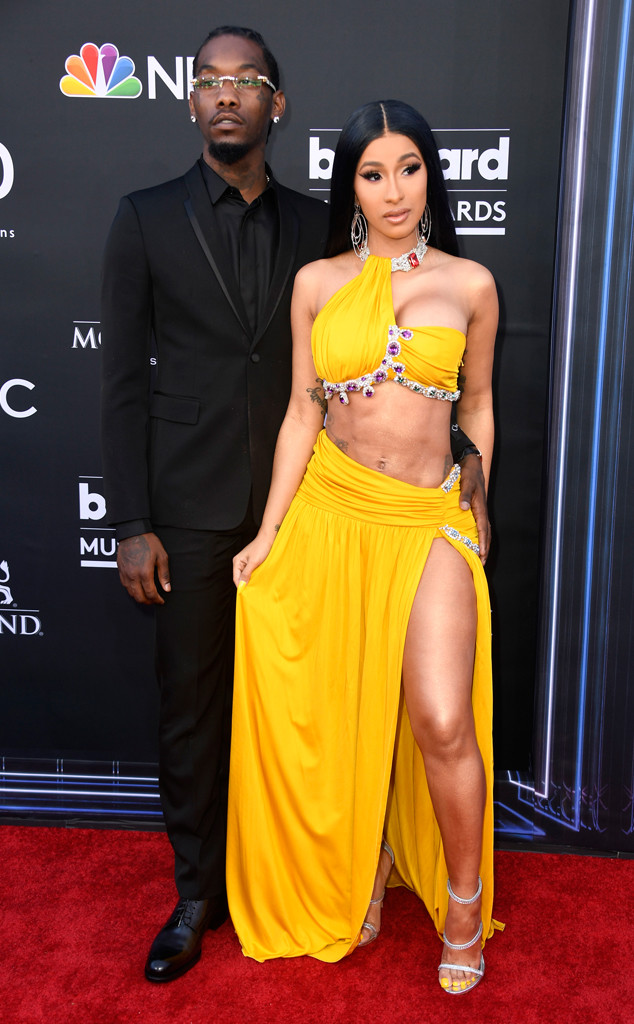 Offset went to extensive lengths to win back his wife, including surprising her onstage at her concert and giving her a giant cake and a $15,000 arrangement of roses that spelled out "Take Me Back Cardi."

He also took to Instagram and recorded a long and emotional video where he begged her to take him back.

"I want to be able to spend the rest of my life with you," he said at one point in the video. "I apologize. I am sorry for what I have done to you. I didn't f--k that girl, but I was entertaining her, you know what I'm saying? I apologize, and I love you, and I hope you forgive me. My birthday wish is just to have you back."

After "working things out," the couple reunited at the 2019 Super Bowland walked the Grammys red carpet together just days later.

The two of them have since spoken out a bit about working through the ups and downs in their relationship  and attending marriage counseling. They continue to share sweet as can be photos of their daughter Kulture, too.