It's been more than 10 years since audiences first got a glimpse at the movie (500) Days Of Summer, the perfect time for stars Zooey Deschanel and Joseph Gordon-Levittto reunite, rewatch and discuss it.

In the fan-favorite film, the two play a couple and his character, Tom, wants hers, Summer, to promise him that she will always feel the same way about him. Summer, who is not happy in the relationship, thinks this is unrealistic and breaks up with him. She marries another man, then later meets a heartbroken Tom, who questions how she was suddenly able to commit to somebody. (500) Days of Summer premiered at the Sundance Film Festival in January 2009 and had a wide U.S. release the following August.

Deschanel and Gordon-Levitt recently rewatched the film and discussed it for EW.

"This is a movie with zero dramatic irony," the actress said, in comments posted on Wednesday. "Zero. It is 100 percent from Tom's point of view, which we've talked about before, but it's one thing people very much misunderstand about the movie. They think Summer's a villain."

For years, fans have debated who was to blame for Tom and Summer's failed romance.

"I'm just so surprised when women will be like, 'I hated your character in that movie!' I'm like, really? She said everything from the beginning!" Deschanel said. "But I think it's also a testament to how, like, adorable you are in the movie. Everyone's like, 'What?! Why would you turn him down? He's so cute!'" 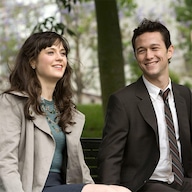 Last August, Gordon-Levitt helped reignite the debate when he tweeted in response to a fan who blamed Summer, "It's mostly Tom's fault. He's projecting. He's not listening. He's selfish. Luckily he grows by the end."

"I think a really actually fun thing to do is try to watch it and just put yourself in Summer's shoes the whole time," the actor said in the EW piece. "This is sort of autobiographical of [co-writer Scott] Neustadter's life. He explicitly has said this is something that pretty much happened to him—but it's from his point of view." The two reminisced about filming key scenes of (500) Days of Summer, such as one in which they reunite and attend a co-worker's wedding.

"OK, that dress was so tight and I couldn't eat that day," Deschanel said about her outfit. "It was a vintage dress, and it was [from] back when people wore girdles, I think, ‘cause it was tight."

In the movie, there is also a karaoke scene. Deschanel told EW that she has actually sang karaoke with Gordon-Levitt in real life, and that she thinks she recalled him getting kicked off the stage because he tore a curtain down.

The actor jokingly called it a "grand exit" and said he thinks he was singing The Black Crowes' "Hard to Handle" at the time.

"That was in my younger days when I just thought a performance would be better as long as I just went for it as hard as I possibly could," he said. "The harder I went, the better it would be."

Deschanel said she and Gordon-Levitt had "so much fun" making the movie.

"We were dancing in the makeup trailer every day," she said.

"Every lunchtime!" the actor replied.