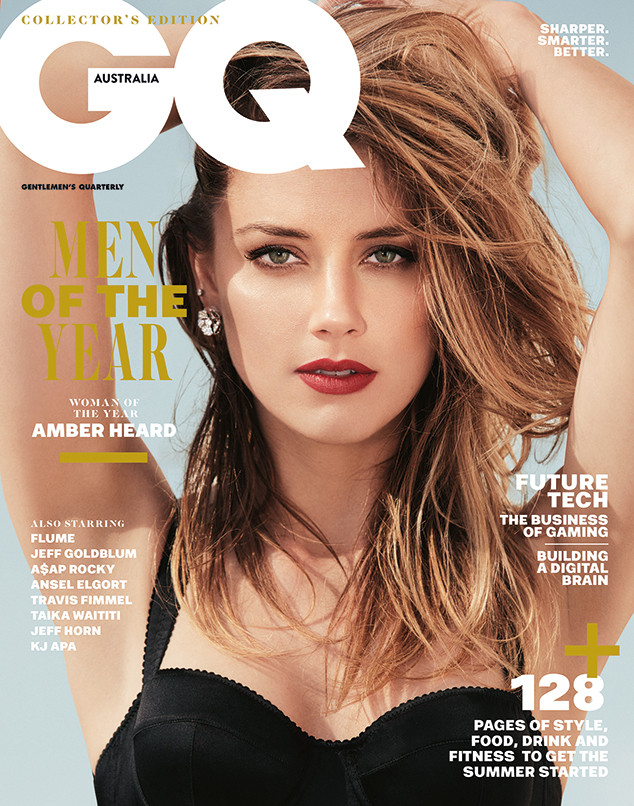 Amber Heard didn't set out to become a role model.

But, like it or not, she inspired many women to speak out against powerful men when she divorced one of the biggest movie stars, Johnny Depp, in May 2016. In court documents, she alleged Depp had been "verbally and physically abusive," which he denied through his lawyer. After months of legal proceedings, they reached a settlement and issued a joint statement, insisting their "relationship was intensely passionate and at times volatile, but always bound by love." As part of the settlement, Heard also received $7 million from Depp, which she promised to donate to the American Civil Liberties Union and the Children's Hospital Los Angeles in 2018.

Heard was named GQ Australia's Woman of the Year, and she appears on its December cover; Ansel Elgort, Flume, Jeff Goldblum and A$AP Rocky appear on the other four magazine covers. Without citing her divorce specifically, GQ editor Mike Christensen asks, "Given what you've been through, is it difficult to appreciate that you're a role model to young men and women?"

The actress, who appears in Justice League, sees both sides. "I feel incredibly fortunate that I'm in a position where I could be of any help. At times it's a burden to consider that your life is no longer just yours and it's not private. It can be hard to know that you can't function in full—that anonymity is no longer a valid goal and that your actions and words, whether they're done on a red carpet or in the most intimate corners of your personal life, to know that those aren't fully yours anymore. That's a difficult realization to come to when it does hit you. It's severe but you grow and move on from that, and on balance, I take into consideration all of the incredible fortune I have being in this position," Heard, 31, explains. "It's hard to stay mad at it for long."

Heard certainly doesn't "mind" being called inspirational. "Have you ever met a woman?" she jokingly asks. "I always tend to do things truthfully and do the right thing. All I strive for in life is never get the temptation to try to be popular, liked, accepted. It's never anywhere equal to the desire I have to live my life truthfully and with dignity and with pride," she adds. "I wouldn't be able to do that if I wasn't living honestly, so it was never tempting to me to live another way."

The Aquaman star, an outspoken advocate for the LGBTQ community adds, "No matter how unpopular or untenable my decisions were, it was never tempting enough to live dishonestly."

In the last month, multiple women have accused some of Hollywood's most powerful men of sexual misconduct. Heard, who was filming in Australia, was happy to be far away from the eye of the storm as the news broke. "I have been enjoying the exhaustion that comes with having nothing but 16-hour days. With my head down, you know, in my spandex suit saving the world as one does. All I can say is I'm grateful for the work and the fact that I'm far away and removed from the drama that's going on in Hollywood. I'm far away from home, but I'm in a place that feels like a second home. And I'm spending a lot of time getting to know the crew. I think I'm falling in love with the Australian point of view. It's been an unbelievable seven months," the actress explains. "I've met so many amazing people and being here has been a gift of fortune."

Like many people, Heard doesn't understand how such acts were kept secret for so long. "You scratch your head wondering why women go through this sort of harm most often behind closed doors," she said. "Just look at how we treat those who do come forward? We have a long history of dismantling and discrediting women with ease in a public theatre. So, you can understand why it would be so intimidating to say anything whether you're a man or a woman. It's a club as well, a small world. And I imagine that being that small it adopts a certain posture."

GQ Australia's Man of the Year issue is on newsstands now.