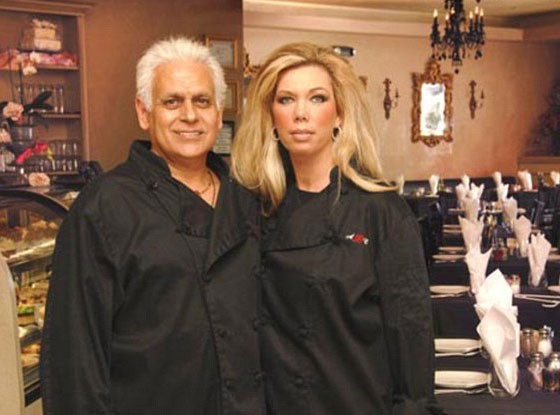 Remember Amy's Baking Company? The first restaurant that Gordon Ramsay ever quit on, on Kitchen Nightmares? Yeah you do! Because Amy and Samy Bouzaglo swore at their customers and tried to hurt them with food and who could forget that!

Amy has finally opened up, to The Daily Mail, about life after the reality show, allegedly saying: "Physically, this has taken a huge toll on me." She claims the couple had to turn off their phone to stop harassing calls and she now worries Samy will be deported to Israel.

As for the episode itself, Amy claims that they actually quit the show, not the other way around ("To make sure they didn't misportray us.") and, on the matter of stealing the employees' tips, claims, "[Samy] would rather cut his balls off than take money from any waitress or servers."

An interesting thing to say when shortly thereafter she admits, "Since the show, we recognize the outcry and now we're giving the servers their tips." So by interesting, we mean maybe that was a lie.

It's also "interesting" in light of an alleged employee contract that's leaked online, outlining the rules of the restaurant. There are 20 rules total and, though they start off as expected ("No Cell Phones allowed" and "You must be dressed appropriately"), the real nutty stuff comes towards the end:

"5).Any type of attitude will result in immediate termination." A fact we learned first hand on the show, when a waitress was fired and called a "a poisonous little viper" after Amy decided her line of questioning was tinged with attitude.

RELATED: Exciting news! Taco Bell is unleashing a Taco Waffle upon the world

"6). You must leave the premise immediately after your scheduled shift, and no family or friends may come to see you while working." Also, employees must not visit or partake in "unnecessary talking" in order to avoid possible harm.

"9).At no point is any food or any type of open beverage allowed in the kitchen. This is a direct Health Code Violate." It's also a violation of no food being cooked in the kitchen (Allegedly. Or so we hear. From Gordon during the episode.)

"14). Respect and distance must be given to all fellow employees. No harassment or bullying of any type will be tolerated and will be cause for immediate termination." Note: This policy applies to employees, not customers.

16) Holidays and Weekends are Mandatory, by signing this contract you are accepting that you will be required to work all Holidays, and Weekends. Due to the nature of our Industry this is a necessity and any No-Show will be monetarily penalized with a fee of $250.00.

17) The recipes and techniques that have been developed by Amy at ABC are exclusive and shall remain confidential. Any removal of recipes will be considered theft. Read it this way: "Recipes" and "techniques."

RELATED: Check out all of E!'s delicious coverage in our Food section!

19) The wait staff understands that any and all ‘tips' are property of the ‘house'. By signing this contract you agree that you willing accept a payment $________ per hour instead of tips. What were you saying, Amy?

20) It takes a great deal of time, energy and patience on the part of Samy & Amy (the owners) to train and teach our employees. We are investing in you as a new employee...By singing this contract you are herby accepting that you will be employed exclusively by ABC Amy's Baking Co. LLC. And shall not work for any competitor within a 50 mile radius of ABC within one year of termination or voluntary Resignation, without prior authorization from ABC.  Nor shall you be allowed to open your own business of the same type, within the above mentioned radius.

In other news, Amy does not have any ill will against Gordon Ramsay, saying, "We wish him all the best and now we're working on our own reality show so stay tuned!" And we will. Because this is the kind of crazy that deserves to be on TV.

PHOTOS: Check out these celebrities who look like famous chefs!