Nicki Minaj Is the Queen of Sexy Style: See Her Most Outrageous Fashion Looks through the Years! Nicki Minaj is never afraid to take a take fashion risk and that is one of the reasons that we love her.

Over the last decade, we've seen the 35-year-old performer steal the show at award ceremonies around the globe thanks to her killer style. Therefore, we would expect nothing but fierce fashion when Minaj opens the 2018 E! People's Choice Awards this Sunday.

E! announced on Monday that the rapper will take the stage to perform one of her hits during the live show this weekend and we are freaking out.

Beyond her musical talent, Minaj's personal style has set her apart from the crowd for the last decade. She knows how to rock everything from fun frocks to glamorous gowns at any red carpet event and we are already wondering what she will wear when she takes the stage at the 2018 PCAs.

Before the big show airs later this week, we are taking a look back all the "Moments 4 Life" singer's best ensembles over the years, so get ready! 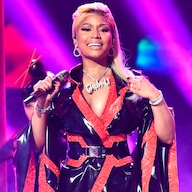 Based on her past looks, Minaj should truly be known as the ultimate red-carpet chameleon, because she has rocked so many unforgettable looks over the course of her career. We really can't get enough of seeing the artist transform before our eyes!

Who can forget when the "Super Bass" singer went to the 2012 Grammys in a nun-inspired red Versace ensemble? Or, what about the time she wore gold head-to-toe at the 2015 MTV Video Music Awards? Both of these style choices were totally iconic.

Ahead of Minaj opening this year's People's Choice Awards, make sure to check out all of her biggest red carpet moments below and then mark your calendars for the show airing live this Sunday at 9 p.m. ET. 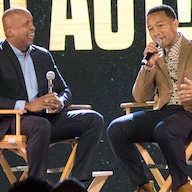 John Legend to Present Bryan Stevenson With the People's Champion Award at the E! 2018 PCAs 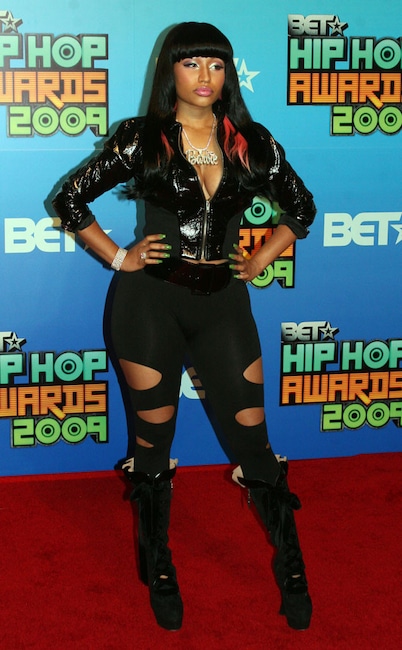 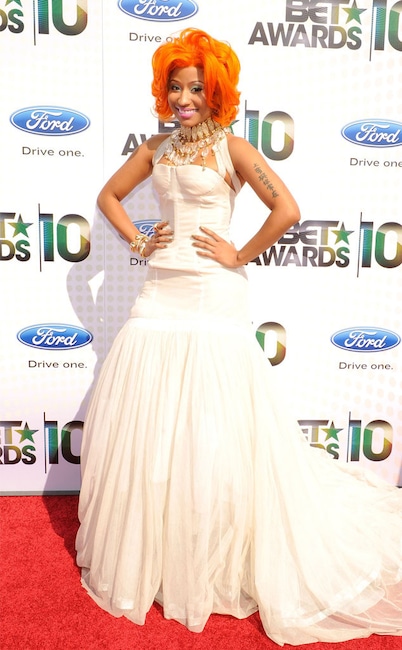 The 35-year-old performer wore a bold white gown on the 2010 BET Awards red carpet, but it was her orange hair that stole the show. 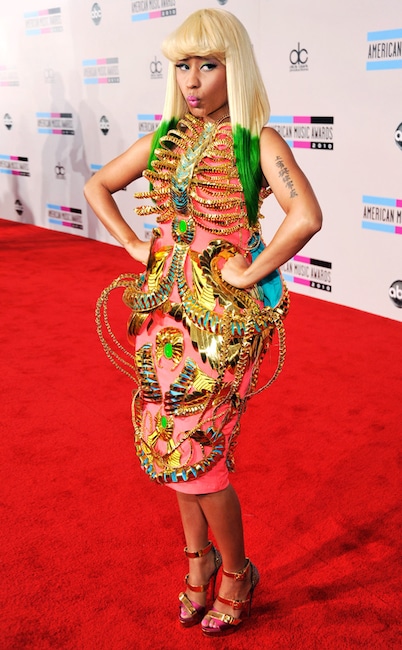 The rapper brought the wow-factor by rocking this embellished Manish Arora midi dress at the 2010 American Music Awards. 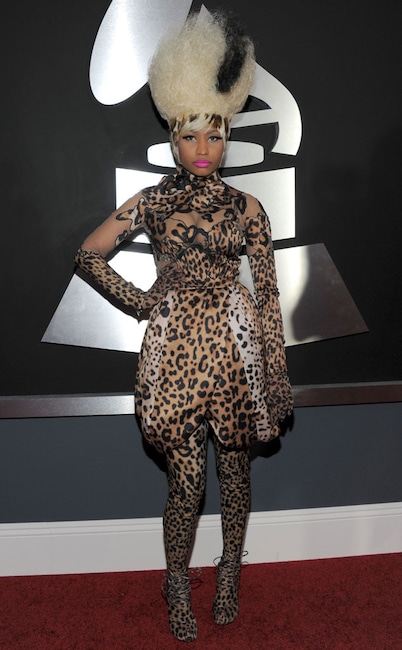 At the 2011 Grammy Awards, the "Super Bass" singer completed her Givenchy leopard-print look with a bleached bouffant accented with a black stripe 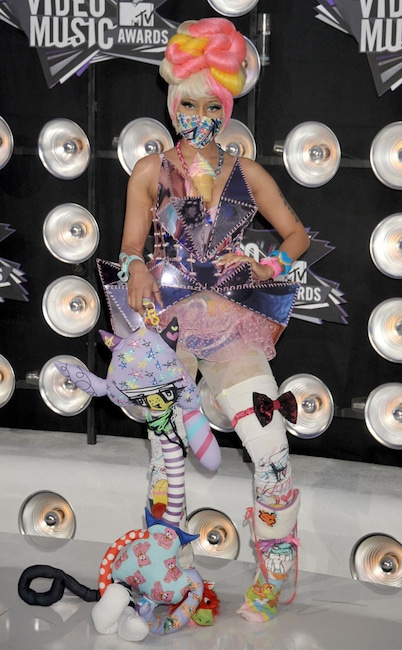 The "Anaconda" performer showed that she is a fashion risk-taker at the 2011 MTV Video Music Awards when she showed up in this bright candy-colored ensemble and sherbet-colored locks to match. 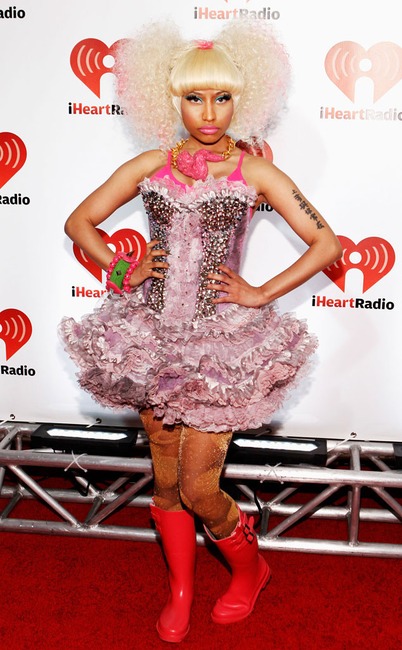 Minaj rocked a pink, sparkly dress with a magenta bra and red boots at the 2011 iHeartRadio Music Festival. 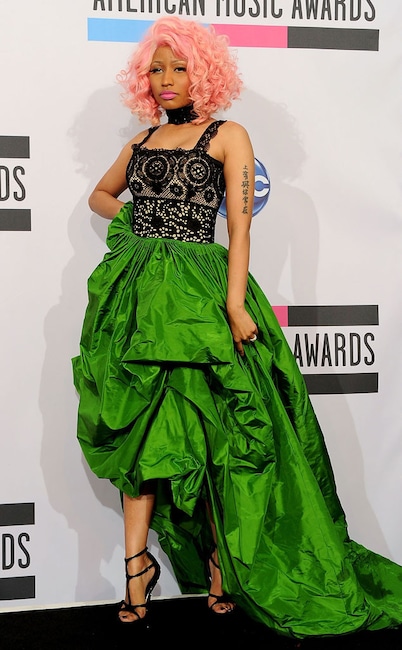 On the 2011 American Music Awards red carpet, the fashionista matched her green and black ensemble with pink locks for another show-stopping look. 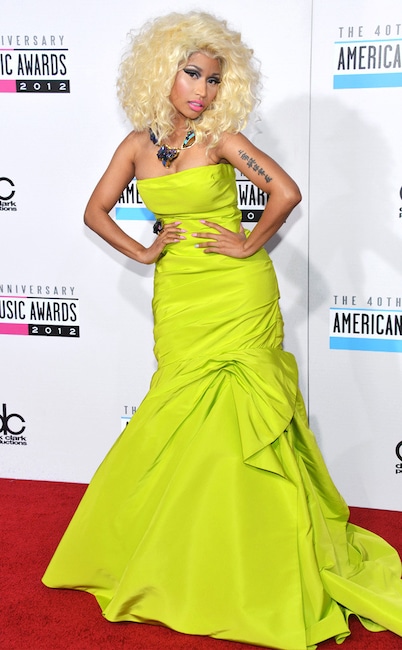 Minaj stood out in a neon gown while making her way into the 2012 American Music Awards. 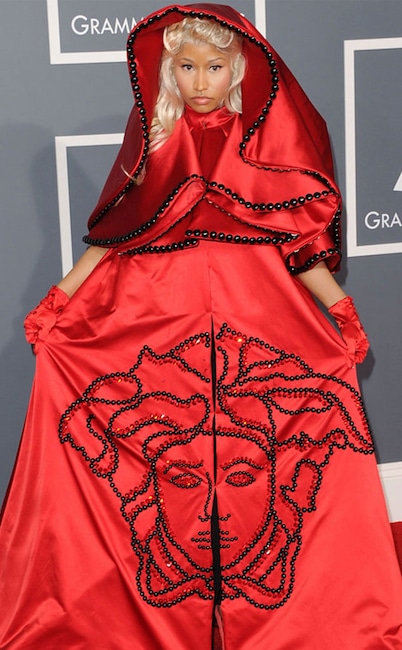 The "Moment 4 Life" singer made a big statement in her nun-like, red Versace look at the 2012 Grammys. 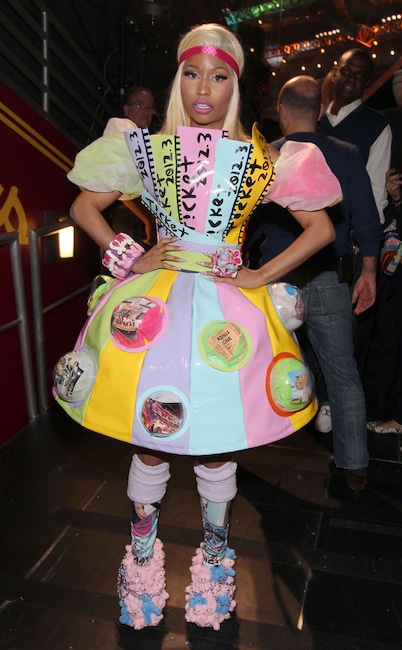 Minaj made fans do a double take when she stepped out in this multi-color pastel look at the 2012 Nickelodeon Kids' Choice Awards. 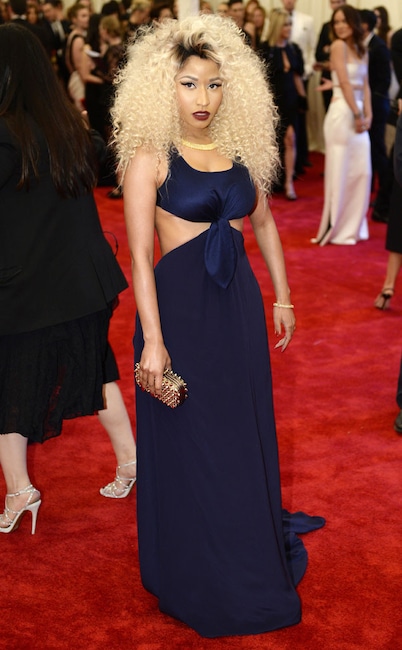 The MTV Video Music Award winner posed on the carpet in a navy blue Tommy Hilfiger gown with cutouts around the midriff at the Met Gala. 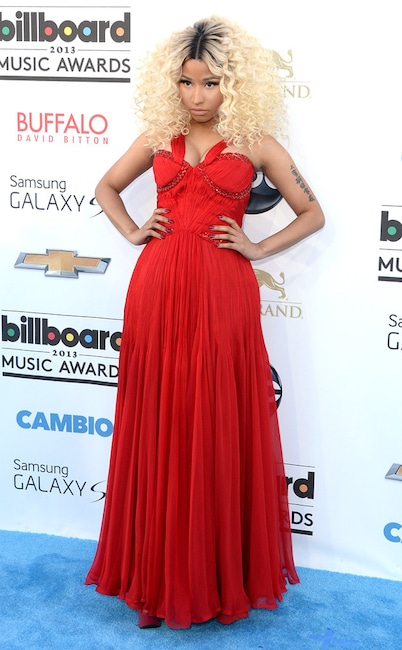 At the 2013 Billboard Awards, Minaj stunned in a sophisticated red gown. 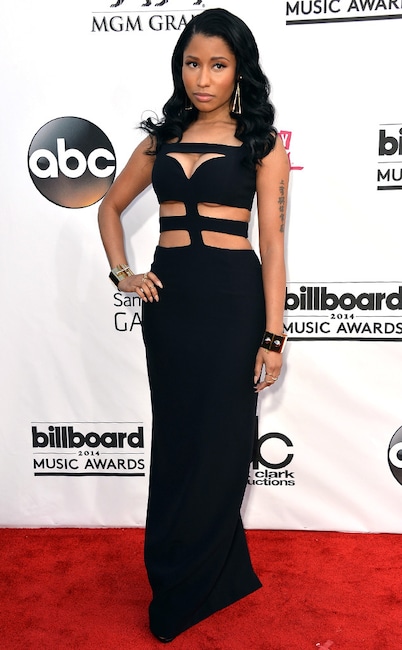 Cutouts were once again the name of the game for Minaj at the 2014 Billboard Awards. 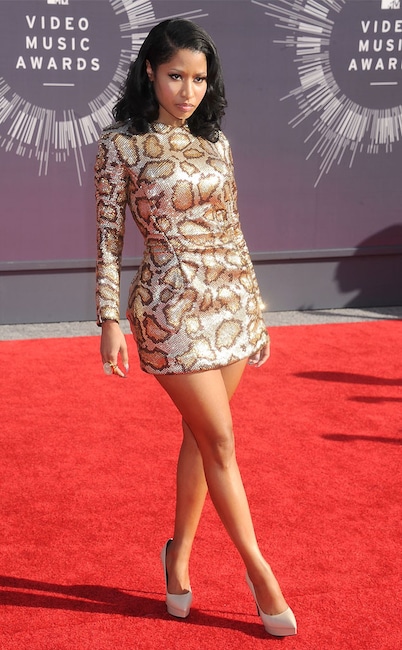 The performer owned the red carpet in a metallic, animal-print mini dress at the 2014 MTV VMAs. 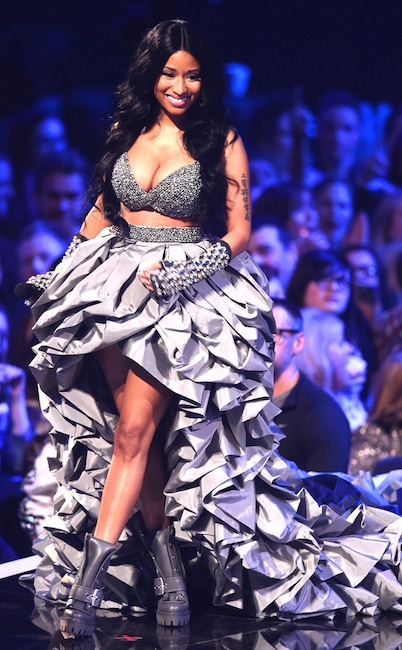 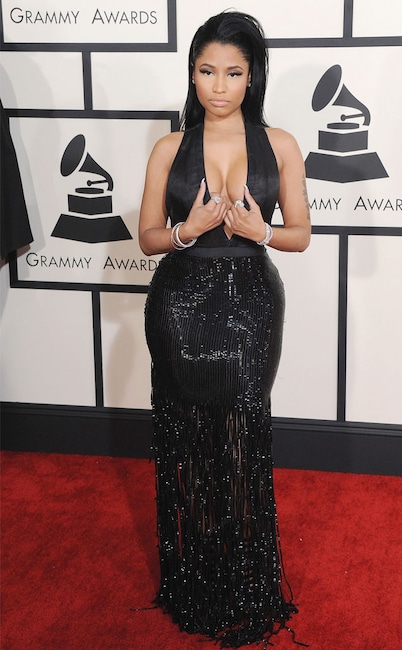 At the 2015 Grammys, the "Barbie Dreams" rapper showed off her curves in a form-fitting black gown. 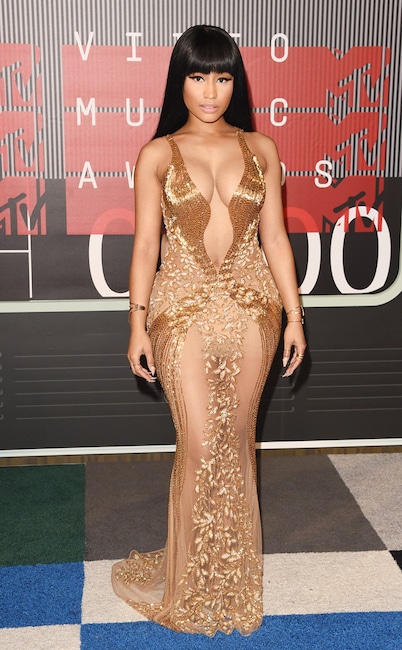 Minaj glowed in gold on the carpet at the 2015 VMAs before taking the stage with Taylor Swift to open the show. 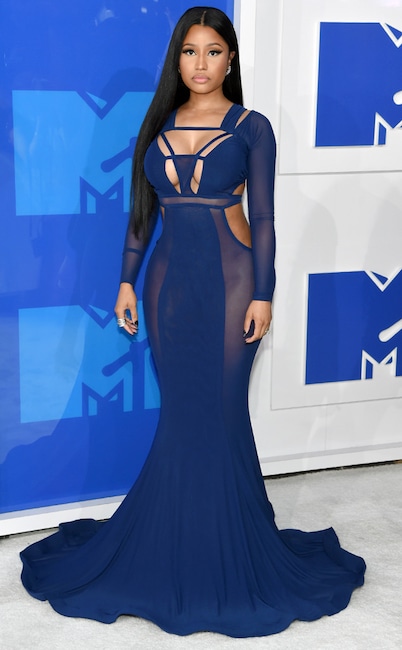 The "Bang Bang" performer showed off her glamorous side in a blue floor-length gown on the white carpet at the 2016 MTV Video Music Awards. 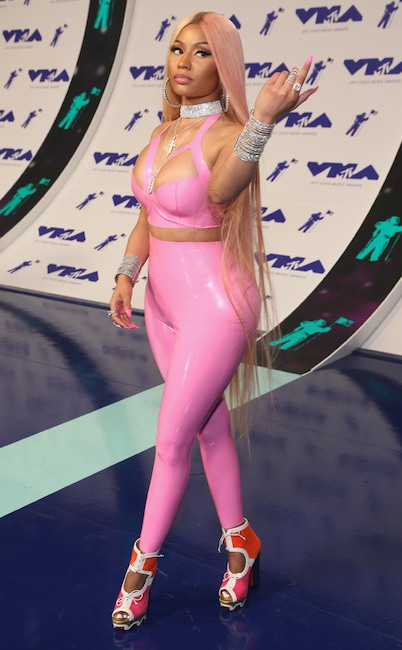 Minaj brought the fun in a two-piece, bubblegum pink, latex jumpsuit when arriving at the 2017 MTV Video Music Awards. 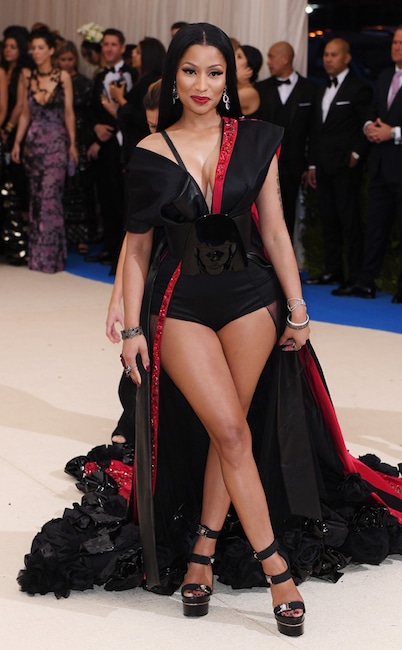 So glamorous! The rapper showed off her toned legs in a black and red H&M custom look at the 2017 Met Gala. 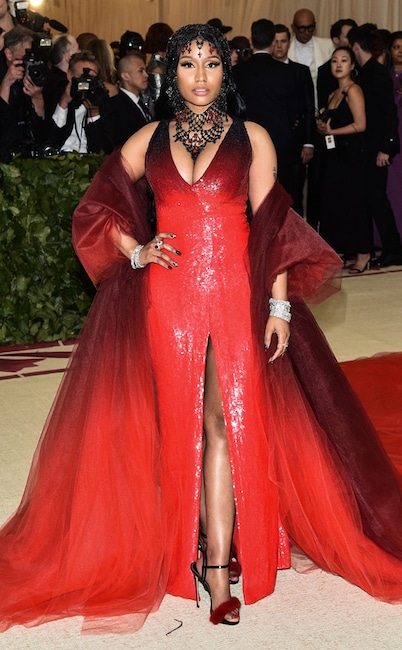 At the 2018 Met Gala, Minaj wore a red, Oscar de la Renta gown, which was inspired by the night's theme of Heavenly Bodies: Fashion and the Catholic Imagination. 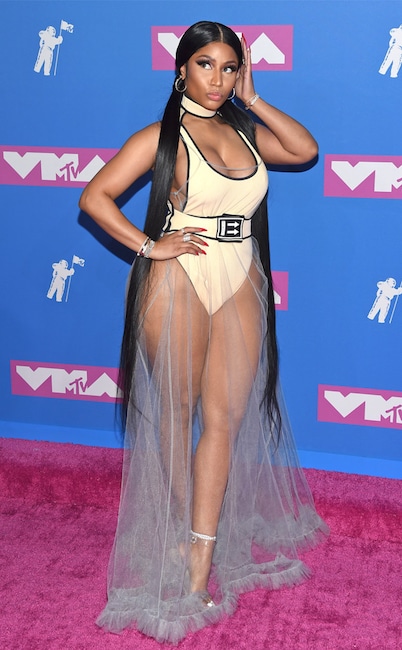 Minaj took the 2018 VMAs carpet by storm with her nude body suit and tulle skirt before performing her songs "Majesty" and "Barbie Dreams" during the big show.