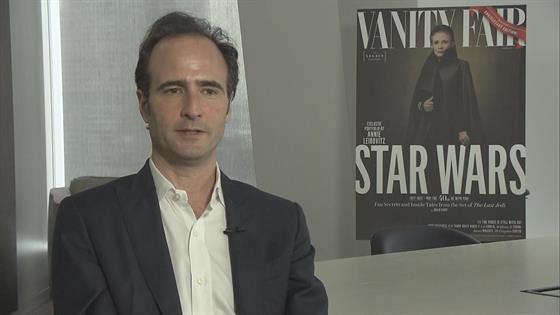 Ready for some Star Wars spoilers?

Here are five takeaways from the magazine's profile:

1. Luke Comes Out of Hiding

Rey handed Luke his lightsaber in The Force Awakens at Ahch-To, the Jedi temple's home planet. Luke has been living in this village among an indigenous race of caretaker creatures. Director Rian Johnson isn't at liberty to share more details—but they're definitely "not Ewoks."

2. The Universe Gets Bigger

Benicio Del Toro plays a "shady character" of dubious allegiances, who is nameless in the film but is called "DJ" on set. "You'll see—there's a reason why we call him DJ," Johnson says. Laura Dern plays Vice Admiral Holdo, an officer in the Resistance. Tran stars as Rose, a maintenance worker for the Resistance, while Veronica Ngo plays her sister, Paige Tico, a gunner who's being trained by Resistance fighter pilot Poe Dameron (Issaac). Tran has the largest role of the lot, as she goes on a perilous mission behind enemy lines with Finn (Boyega), a former stormtrooper.

3. There Are New Cities to Explore

Finn and Rose's adventure takes them to a casino city called Canto Bight, "a Star Wars Monte Carlo–type environment, a little James Bond–ish, a little To Catch a Thief," Johnson says. "It was an interesting challenge, portraying luxury and wealth in this universe." Because so much of the Star Wars universe has been set in sandy desolation, he wanted to juxtapose it with an ultra-glamorous set. Or, as he tells Vanity Fair, "Let's create a playground, basically, for rich a--holes."

4. Everyone Is on the Mend

Finn begins the new movie in a "bacta suit," a regenerative immersion tank that heals damaged tissue. Kylo Ren (Driver), who was physically scarred after his lightsaber battle with Rey in The Force Awakens, is also in recovery. "I feel like almost everyone is in that rehabilitation state. You know, I don't think that patricide is all that it's cracked up to be. Maybe that's where Kylo Ren is starting from," Driver teases. "His external scar is probably as much an internal one."

5. General Leia Is Quite a Force

"We did this scene where Carrie has to slap me. I think we did 27 takes in all, and Carrie leaned into it every time, man. She loved hitting me," Isaac says. "Rian found such a wonderful way of working with her, and I think she really relished it." Fisher finished filming The Last Jedi late last summer, a few months before her unexpected death. "She was having a blast. The minute she finished, she grabbed me and said, 'I'd better be at the forefront of IX!' Because [Harrison Ford] was front and center on VII, and Mark is front and center on VIII," Lucasfilm president Kathleen Kennedy recalls to Vanity Fair. "She thought IX would be her movie. And it would have been."

Vanity Fair will be on newsstands in L.A. and New York City May 31 and nationally June 6.