Floyd Mayweather Jr. vs Manny Pacquiao: "Fight of the Century" by the Numbers 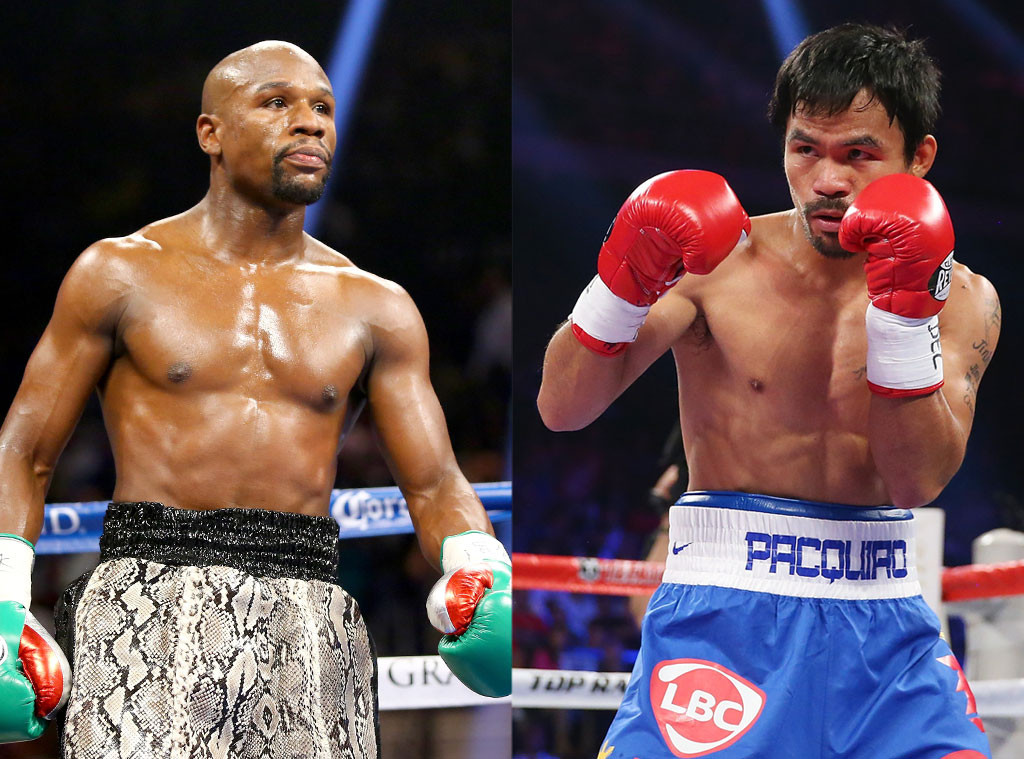 On Saturday, Floyd Mayweather Jr. and Manny Pacquiao will duke it out in in MGM Grand Garden Arena in Las Vegas in what's been dubbed the "Fight of the Century."

50 Cent and Diddy put money on Mayweather, who's favored to win, but Mark Wahlberg is betting on Pacquiao. Regardless of who you want to win, though, there's one thing we can all agree on: There is a gargantuan amount of money tied to this fight!

You want numbers? OK, the fight itself expected to generate more than $300 million in pay-per-few revenue. According to ESPN, Mayweather can expect to clear $180 million of this, with the remaining $120 million going to Pacquiao. These predictions, mind you, are contract-based, so regardless of who wins and who loses, both fellas are making bank off this blow-out. (The winner will get extra royalties from the fight's sponsors and future endorsements, but still, loser makes it out OK, too.)

It's predicted there will be between 3 and 4 million PPV buys of the fight—which will cost people $99.95 (although there are up to $50 in rebates available). Mark Taffet, who who oversees pay-per-view for HBO, said people can justify the hefty price tag by making an event of watching the fight with a group.

"When you take the cost of pay-per-view and divide it by the number of viewers in each house we expect the cost averages out to that of a movie ticket," said Taffet, per NBC Sports. "The cost of the refreshments for the viewing parties usually exceeds the cost of the pay-per-view telecast." You PPV peeps have a lot of friends and expensive taste, huh?!

Anyway, if you want to see Mayweather vs. Pacquiao play out IRL, it's really going to cost you. According to the L.A. Times, last month 500 tickets were made available to the public (going for $1,500, $2,500, $3,500, $5,000 and $7,500)—naturally, these sold out in under a minute. If you seriously lucked out and nabbed one of these, kudos! Now, cash in on the second market and live your life—according to CNN, the cost of a ringside ticket is now somewhere in the $180,000 range...so pretty much anyone who complains about seating at the fight should be smacked in the face with a #RichPeopleProblems hashtag. Repeatedly.

At least, though, everyone's being honest about the fact that this fight is all about the money. Mayweather, whose middle name used to be Money, has already figured out how his children will profit from punches thrown. "Let's say I make $200 million," he said, per NBC Sports. "That means my kids for this fight will get $50 million apiece. I think I made a smart move."

But while Mayweather, 38, is going in undefeated (Pacquiao, 36, has had 5 losses and 2 ties), it's those dollar signs—not Floyd's zero losses to date—that pay the bills, thank you very much! "At the end of the day my daughter can't eat no zero," he acknowledged. "She can't spend a boxing ring."

That's...accurate. As for Pacquiao, currently serving as a senator in his home country of the Philippines? He's admittedly kind of in disbelief about the astronomical numbers involved here. "I used to sleep in the street starving and hungry," he said. "I can't imagine the boy who slept in the streets was raised to this level where I am today."

That's what you call making it big, kids. To keep all this in perspective, though, remember that this "Fight of the Century" will determine the welterweight champion of the world. In order to fight in this weight class, Mayweather and Pacquiao have to weigh in Friday afternoon at under 147 pounds. 147 pounds! Basically, millions and millions of dollars revolve around the punches thrown by two Bieber-sized men.

TAGS/ Sports , Money , Top Stories
GET POP CULTURED!
*Email entered incorrectly. Please try again.
By subscribing to our newsletter you agree to the Privacy Policy and Terms of Use
Daily
Weekly