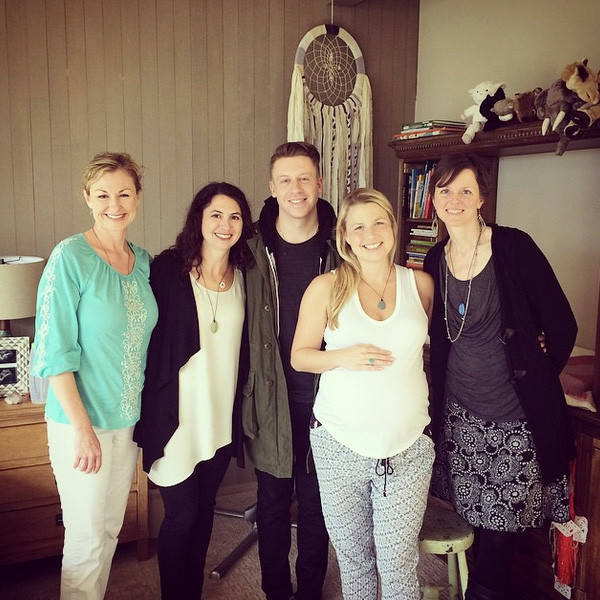 Macklemore and pregnant fiancée Tricia Davis are set to become parents soon and their delivery team has been assembled!

Davis Instagrammed on Saturday a sweet pic of her and her rapper beau, standing with two of her midwives and her doula inside a room containing a dream catcher and several stuffed animals. The couple announced her pregnancy in January with a heartwarming, emotional video. They have not revealed the sex of their child, who is due in May.

"My amazing doula April and midwives Tina and Wendy.... So grateful," Davis wrote.

The dream catcher is handmade and is for the baby, she had said on Instagram last week.

Nesting is real. Handmade dreamcatcher for the baby to gaze at... ???? #36weeks

Their midwife Tina had worked with the couple before. The music video for Macklemore and Ryan Lewis' Grammy-nominated LGBT rights-themed single "Same Love," which features Mary Lambert. Davis had produced the clip.

"A few years ago when I was producing the 'Same Love' video, Tina let us film the birth and death scene at her midwifery center," Davis wrote on Instagram. "We were turned down by many other clinics and people.. She opened up to the project immediately and was so gracious throughout, despite Ben not being well known."

"Flash forward, she will be delivering our little boy or girl," she said. "Gearing up for the exciting day with the team today was a treat."

Macklemore, whose real name is Ben Haggerty, and Davis have been together for more than eight years. The 31-year-old rapper announced on Instagram in January 2013 that they were engaged and posted a photo of a round-cut diamond engagement ring.

Nice to be reminded by the afternoon light of how lucky I am to have found you 8 years ago. Everything Rumi ever said about love was true... The wound is the place where light enters you??

Davis had occasionally shared photos of herself during her pregnancy. When she was 30 weeks along, she posted this beautiful picture.

"Thanks @macklemore for the photoshoot," she wrote.

Thanks @macklemore for the photoshoot ?? #30weeks

Macklemore and Davis' baby will join their adorable cat Cairo, often seen on their Instagram pages (and who also has a personal Instagram page).

Best decision I've made in a long time.... Everyone meet Cairo. #cairothecat

Happy Sunday with my pops @macklemore

"Any moms have advice on how to transition a spoiled kitty with baby arrival?!" Davis wrote last week. "@cairothekat thinks everything arriving is for her..."

TAGS/ Top Stories , Babies , Pregnancies , Macklemore
GET POP CULTURED!
*Email entered incorrectly. Please try again.
By subscribing to our newsletter you agree to the Privacy Policy and Terms of Use
Daily
Weekly