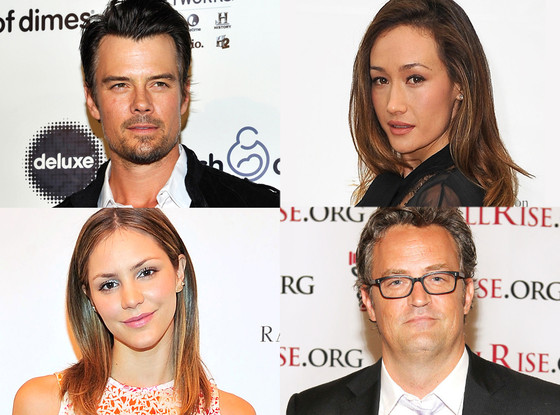 Matthew Perry is giving this whole TV thang yet another try.

CBS has announced the pick-ups of five new dramas and two new comedies, and although there are some promising series in the mix, we're left with one very important question: What about How I Met Your Dad?!

The potential HIMYM spinoff has already accrued a strong fan following, however it was inexplicably missing from CBS' pickup list for today. Although there is still time for Greta Gerwig's series to get the official go-ahead, as of right now the series' fate is still in the air.

As for the shows that are definitely a go: Get ready for yet another NCIS spinoff, a Kevin Williamson drama that is sure to please all Nikita fans, and Matthew Perry is once throwing his hat into the comedy ring.

MORE: Check out all of ABC's news shows!

NCIS: New Orleans: The NCIS New Orleans office handles cases from Pensacola through Mississippi and Louisiana to the Texas panhandle. Special Agent Dwayne Pride (Scott Bakula) will lead his team through the rich setting of music, fun, and debauchery which, in the NCIS world, is a natural magnet for trouble.

Stalker: From the dark and twisted mind of The Following's Kevin Williamson comes Stalker, a psychological thriller centered around a pair of detectives, played by American Horror Story's Dylan McDermott and Nikita's Maggie Q. These two TV badasses will handle stalking incidents for the Threat Management Unit of the LAPD. And of course look damn fine while doing it.

Scorpion: Calling all Smash Fans, it's time to welcome Katharine McPhee back to the small screen. The actress has signed onto to star alongside Robert Patrick and Eddie Kyle Thomas in Scorpion. The drama follows an eccentric genius (Patrick) and his international network of super-geniuses form the last line of defense against the complex threats of the modern age.

MORE: Check out all of NBC's new shows!

Madam Secretary: Are you ready for yet another, political drama? Madam Secretary follows the personal and professional life of Secretary of State Elizabeth McCord (Tea Leoni). Viewers will watch as this "maverick" drives international diplomacy, wrangles office politics, and balances a complex family life.

Battle Creek: When two detectives, played by Josh Duhamel and Dean Winters, with very different world views are teamed up, they must answer the question: is cynicism, guile, and deception enough to clean up the semi-mean streets of Battle Creek, Michigan. Along with How I Met Your Mother's Kal Penn, the detectives must in the face of a complete lack of resources; or is the exact opposite true – it takes naïveté, trust and a boatload of resources? Dun dun dunnn!

CSI: Cyber: Brace yourselves, CSI fans because technology, as we know it, has amplified human behavior to the point where faceless criminals are committing crimes at global proportions with a touch of a button.  Patricia Arquette stars as Avery Ryan, Special Agent in Charge at the Cyber Crime Division of the FBI in Quantico, VA, is tasked to solve high octane crimes that start in the mind, live on-line, and play out into the real world.

MORE: Check out all of The CW's new shows!

The Odd Couple: Matthew Perry is once again dipping his toe back into the vast ocean of TV with a brand-new pilot. The Friends actor, who co-wrote the first script and will serve as an executive producer, is set to star as Oscar Madison, the iconic messy roommate who is always up to no good. Thomas Lennon is set to play the iconic neat freak, Felix Unger. (And in case you missed it, here are all the reasons why Matthew Perry is going to be the perfect Oscar!)

McCarthy's: Saddle up for another family comedy starring the amazing Laurie Metcalf! The McCarthys revolves around a big, sports-crazed Irish Catholic clan in Boston and their gay son, played by Tyler Ritter (Fun-fact: He's Jason Ritter's little brother!) The comedy has been retooled as multi-camera after shooting a single-camera pilot last season.

Check out the status of every single returning show and find out what will live on by clicking below!

PHOTOS: Renewed or canceled? Find out where your favorite shows stand