In the mood for romance?

Good, because that's exactly what's on tap in today's Spoiler Chat! Not only do we have scoop on trouble ahead for The Big Bang Theory's Leonard and Penny and Nashville's hot new hookup, we've got major intel on New Girl's Cece-Schmidt-Elizabeth love triangle and Castle's proposal! And don't worry, if romance isn't your cup o' tea, we've also got spoilers on House of Lies, 2 Broke Girls and more...

McKenna in Providence: I'm intrigued by Once Upon a Time in Wonderland, but who is that girl that plays Alice? I've never seen her before.
Woah, now! That girl is a lovely Australian actress known as Sophie Lowe, and she's enchantingly talented. We'll let you in on a little secret: There's a reason that you probably don't recognize her. Wonderland executive producer Zack Estrin says that they really wanted their cast to be filled with a lot of low-profile actors and actresses, so you fans wouldn't be distracted from the story. "It's kind of like the indie film version of Wonderland. Our faces are fresh and you're coming in and you aren't saying, 'Oh look there's Buffy as Alice!' Sophie is amazing our cast is great and we're really excited." Plus audiences will fall in love with Lowe's kickass interpretation of Alice. Estrin reveals, "Any girl that went down the rabbit hole and had that kind of guts is going to grow up to be a pretty amazing woman." We already love her!

READ: Get all the latest news and scoop from the 2013 Summer Press Tour!

Anna in Portland: When will we know who Schmidt chooses on New Girl?
Schmidt will be called "boyfriend" by Elizabeth or Cece within the first three episodes. Nope, we're not telling you who. Just know that Schmidt, bless his douchebag jar-filling heart, will not make this decision without some serious guilt.

RhendraFr: Give us some funny news about The Big Bang Theory!
Well, we do have some news for you, but unfortunately it's not very funny. In fact, it kind of has us worried for our favorite beauty-and-the-geek couple. When we last saw the gang, it was smooth sailing as Penny told Leonard to follow his dreams and accept a position working on a North Pole research vessel for Stephen Hawking. However, in the first episode back, we'll get a peek into Leonard's life, and let's just say that things aboard the ship are less about thinking and more about drinking. When Penny and Sheldon reach out to call their beloved experimental physicist, Leonard is making waves and partying it up with multiple ladies. Looks like we might need to send out an SOS for our favorite Big Bang Theory couple.

PHOTOS: Check out all the new TV shows hitting your screens this fall

Tammie in St. Louis: Loved the Scandal stories! I'm dying for it to come back. Can you fix my withdrawal with some spoilers?
Darby Stanchfield tells us she really wants Abby to get some loving this season. "It would be nice for Abby to be happy. She's had the school of hard knocks," she says. "Especially at the end of last season, it was a bitter pill to swallow that David pulled one over on all of them. And what she doesn't like is liars and cheaters!" So there's no hope for Abby and David? "It would be interesting to see more of Abby and David, but I also want her to branch out and try someone new," Stanchfield reveals. Sorry, David-Abby fans. Sometimes shippin' ain't easy. 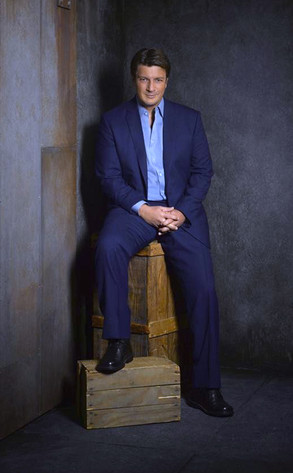 Kasaraleann: Will Beckett accept Castle's proposal?! Sept. 23 is too far away!
We totally agree, so here's some Caskett info to feed your frenzy in the meantime! We recently caught up with Seamus Dever and asked him if he thinks that Beckett will say "I do!" to Castle's proposal. "I think she is going to search deep into her heart and I think she is going to consider all her possibilities and she's going to do what's best for Beckett," he said. Come on Dever, you've gotta give us a little more than that! After a bit of soul-searching, Dever admitted, "I hope she says…The fact that they're in love and they're good at what they do is all about the future of this show and the idea that all these things can coexist." Woo-hoo! Let's hope Castle finally puts a ring on it this season.

Kyle in Austin: The only show I watch is House of Lies. Scoop me!
First of all, you really need to expand your TV horizons. It's a great big world out there! But since you are so desperately loyal, we shall reward you with some tidbits from Marty himself.  We caught up with Don Cheadle last week at the big Showtime bash and got right to the goods: How on earth is Marty going to schmooze his way out of this mess? "We left the end of season two with Marty having blown up all of his relationships," Cheadle says, "So, you know, third season is really about damage control and the wreckage and trying to figure out a way to get back, or if he can get back, maybe not. Maybe all of the pieces won't come back together." As for Marty and Jeanie (Meanie?) Cheadle says we will eventually see him address her declaration of love, "I think there's too much wreckage for him to just sort of skirt around it, he's going to deal with things in a different way than he has."

READ: Get the latest TV scoop with our Spoiler Chat!

Erin L.: Agree whole-heartedly with you guys about Hayden Panettiere being snubbed out of an Emmy nod. Can I get some Juliette Barnes scoop about season two to help me get over it?
For those fans who are predicting that Avery and Juliette are moving closer to becoming more than just touring partners on Nashville, you might be right. In the beginning of the new season, those two will share many cute moments together that will leave viewers practically swimming in sexual tension. If you weren't a fan of the pairing before, you might be after episode three.

Terrie: Missing my 2 Broke Girls ladies, so any scoop on the first episode would be much appreciated.
In the season premiere of the CBS comedy, there will be a death! Mwah-ha-ha! (That was an evil laugh, in case it didn't come across in print form). Don't worry, Max and Caroline survive the episode, but we can't promise a patron of their cupcake business will make it out alive.

TAGS/ Spoiler Chat , Watch With Kristin , TV , Exclusives , Top Stories
GET POP CULTURED!
*Email entered incorrectly. Please try again.
By subscribing to our newsletter you agree to the Privacy Policy and Terms of Use
Daily
Weekly