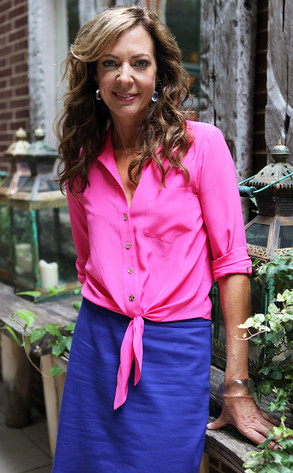 With Independence Day just around the corner, many Americans are getting ready to fire up the grill and take in some fireworks on the Fourth!

But if you're Allison Janney, you'll save the celebrations for the sixth of July.

"I'm being a little rebel this year," Janney told us at the premiere of her summer flick The Way, Way Back. "I'm not having a Fourth of July party, I'm having a sixth of July party."

But don't think her postponing the party makes her any less patriotic than those of us who will be toasting America on July 4.

"I have had a lot of Fourth of July parties in my past and I think it's one of the best holidays to have a party and it's not fraught with a lot of family tension," she explained. "It's usually just a lot of fun and barbecue and picnic and flags and you just feel very patriotic and it's just a day you're proud to be American and you do everything American. You know, hot dogs and hamburgers and Lay's potato chips and those red-white-and-blue popsicle pops."

But with all those outdoor barbecues and picnics in the scorching summertime temps, it can be hard to keep fresh faced. So, we asked Janney about how she plans to look effortlessly stunning at her upcoming sixth of July party, as well as the rest of the warm weather season.

Here's are the handy summer beauty secrets she shared with us:

1. Try a Tint: "A good tinted moisturizer with SPF is my favorite and sometimes only makeup that I will wear in the summer," raved Janney. "I like Laura Mercier's tinted moisturizer and sometimes I'll get the tan and the olive and mix them together a little bit and that's my go-to for everything. I don't like wearing a lot makeup unless I'm doing a photo shoot or working."

2. Go Golden: "I do like a spray tan, especially when I have an event," she revealed. "It just makes me feel confident about my arms and legs being the same color." We couldn't agree more! An uneven tan is almost as bad as tacky as tan lines. Plus, with a spray tan, we can get our glow on without suffering the sun's aging side effects.

3. Manage Your Mane: "I like hair products, like a good leave-in hair oil. Kerastase makes one and Moroccan Oil. There are oils that have SPF in them and they nourish your hair so you can be out in the sun and also be giving yourself a hair treatment while you're playing tennis or, you know, out at the beach."

4. Treat Your Toes: "A good pedicure is a must," Janney said. "My favorite color of all-time is Essie's…I think it's called Teeny Bikini or Itsy Bitsy Bikini. It's the best blue for the summer and I actually wear it year round." And since she was actually wearing the pretty blue polish when we caught up with her—and even took the time to show it to us!—we believe her!

What are some of your favorite summer beauty tips and tricks? Tell us in the comments!

TAGS/ Allison Janney , Beauty , Trends , Fourth Of July , Top Stories
GET POP CULTURED!
*Email entered incorrectly. Please try again.
By subscribing to our newsletter you agree to the Privacy Policy and Terms of Use
Daily
Weekly