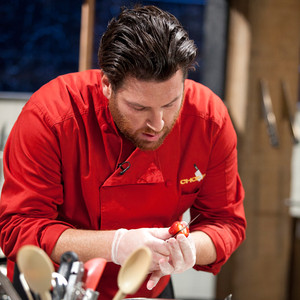 Confession: Chopped has taken over our lives.

15 seasons in and over 150 episodes deep, we can't get enough of the Food Network's cooking competition show, which features new mystery baskets containing crazy ingredients that throw four competitors (and us) for a loop (you can read more about our love for the show here).

So, you can imagine our excitement when we were able to sit down with one of our favorite judges Scott Conant, aka "the Italian virtuoso" with a well-documented hatred of raw red onions whose ah-mah-zing Scarpetta restaurants are in five different cities, and harass him about talk all things Chopped.

Thankfully, he was more than willing to spill the hit series' secrets, including if host Ted Allen ever tastes the food and which judge takes the longest to "chop" someone!

Plus, he talks about tonight's All-Stars grand finale, in which he competes against celeb chefs for the title of Chopped champion...

NEWS: Why you should be watching Chopped!

Fraternizing With the Enemy: Conant's story about his first time meeting competitor Laila Ali is so funny, we're just going to let him tell it: "I'm such a huge Muhammad Ali fan, so Laila Ali in particular, I really want to see what she brings to the table in a competitive perspective. I don't know her background if she can cook or not, but she was the one person that when I heard about it, I was like, 'this is gonna be awesome!' The funny thing is when that was shot I had done a charity dinner for Muhammad Ali. It was his 70th birthday like two weeks prior."

"So, I finally caught up with her the day that she competed, and I said, 'You know I was one of the chefs at the dinner for your father.' And she was like, 'What dinner?' I said, 'Well his 70th birthday in Vegas a couple weeks ago.' She was like, "Oh, there was food?" [Laughs.] I was so disappointed, I was like no, no, no. Talk about disheartened!"

Cooking for Charity: Should Conant win tonight's finale, he'll be handing over a $50,000 check to Keep Memory Alive,  an organization dedicated to helping patients suffering from brain-related disorders. "They're able to help so many people, not just with the actual patient and going through the process and the confusion attached to any brain related disease, in particular Alzheimer's, but also, they're really there for the patient's families, and allow them some kind of comfort," he explains. "As comfortable as it can be watching someone kind of completely lose themselves, and their memory, and any type of identity. So, for me to be associated and to be standing there and able to kind of fight in the way that I can for that charity is an honor, but to be able to hand them a check would be really something special." 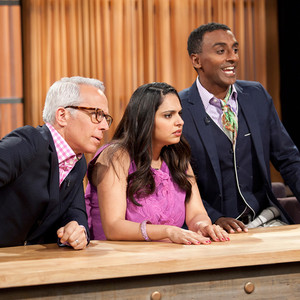 The Basket is the Equalizer: Of the baskets he has to deal with in tonight's finale, Conant says, "They were good baskets. I think the basket Gods were really kind to us. Fortunately there was no chicken in a can, no crazy stuff. There was still Chopped baskets. There was still little things inside them that were a little different. We find out mostly the morning of, which is always a challenge. Just some of those baskets.

Judge or Friend?: Though he is "good friends" with all his fellow judges, Conant was most nervous cooking for Zakarian. "I know he is a stickler towards things. He's one of those people that if he doesn't respect you, he'll look around and never see you," he explains. "He can't help it, it's not a bad thing; it just doesn't exist, but if you earn his respect, suddenly there's a glowing friendship." But Conant says he would love to compete against Zakarian, as well as Marcus Samuelsson and Chris Santos in the future, though he insists he's "done" competing.

NEWS: Look back on the best TV moments of the week!

Secrets Revealed: Of course, we had about a million behind-the-scenes questions for Conant, who was more than willing to spill. So how long do the judges deliberations take? "About twenty minutes, unless Alex [Guarnaschelli] is there, then it'll take about an hour and a half," Conant says. Does Ted Allen ever get to taste the food? Only if he thinks "it's worth it." Does he ever sit? "No, the poor guy! It's a long day and we sit the whole time and he stands!"

Do the judges ever get a heads up about the basket ingredients? "We'll find out sometimes the night before, but mostly the morning of," Conant reveals. The worst thing he's ever ate on the show was "hands down" durian. His favorite round to critique? "I always love the main course...we get so many bad desserts. A lot of french toast, a lot of things that don't come together!"

Twitter Wars: Though Conant used to retweet a lot of the negative messages he received from fans, a fellow judge convinced him to stop. "Geoffrey was like, 'You've gotta stop!' He literally pulled me aside and was like, 'You've got to stop. It's ridiculous and just ignore them. Frankly, it's kind of childish.' I was like, 'I disagree with you, but I see your point!'"

TAGS/ Watch With Kristin , Exclusives , TV , Top Stories
GET POP CULTURED!
*Email entered incorrectly. Please try again.
By subscribing to our newsletter you agree to the Privacy Policy and Terms of Use
Daily
Weekly