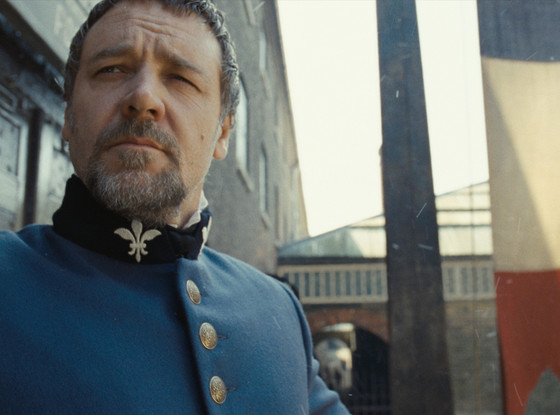 Uh-oh, is Les Misérables in trouble?

Some takes on the surprising nods—and exclusions—from Thursday's nominations for the 70th annual Golden Globe Awards:

Lincoln in the lead at the Globe noms

1. Les Mis?! Yes, it got nominated for Best Comedy/Musical. And, yes, Hugh Jackman and Anne Hathaway got their expected acting nods, too. But the presumed favorite didn't rate any extra love for long shots like Russell Crowe, and, most alarming, was cut off at the knees in the directing category, where Tom Hooper failed to make a showing. Is the Hooper snub a bad Oscar omen? Or just a sign that the Hollywood Foreign Press Association really, really, really loves Quentin Tarantino, who was nominated for Django Unchained?

2. The Les Mis-Taylor Swift Sing-Off! The good news is there's a showdown coming between the all-new Les Mis number "Suddenly" (sung in the movie by Jackman) and Swift's Hunger Games contribution, "Safe & Sound." (Jon Bon Jovi, Keith Urban and Adele also have tunes in the running.) Unfortunately, we don't recall Original Songs being performed at the Globes ceremony.

3. The Dark Knight Rises, The Avengers, Skyfall and Every Other Acclaimed Action Movie Ever Made?! You were expecting the HFPA to invite Bane and the gang to its party? Probably not. But snubs are snubs. And while Skyfall's (lone) nod for Adele is nice (and warranted), it doesn't change the maddening fact that the action genre just isn't considered award worthy.

4. The Hobbit?! It didn't look to compete in the top categories, but in no categories?

5. Ted and This Is 40?! Stop looking through the list. You won't find either of these comedies nominated anywhere for anything—'cause, you know, Salmon Fishing in the Yemen, up for three big awards, is way funnier.

6. Cloud Atlas! Had you forgotten about this ambitious box-office bust? The HFPA didn't, giving it some love for the score.

7. Nicole Kidman! If it was just the Globes, you'd think the HFPA was just being the HFPA, and getting all starry-eyed over the international star, who got headlines but not much more from the barely seen The Paperboy (worldwide gross: $693,286, per BoxOfficeMojo.com) But it's not just the Globes, of course. Kidman picked up a nod Tuesday from the Screen Actors Guild. She is now officially a real deal in Oscar's Supporting Actress race. (And, after two no-shows at the SAG Awards and the Globes, afraid to say On the Road's Kristen Stewart isn't.)

Shockers from the SAG Awards nominations

8. Richard Gere In, Anthony Hopkins Out?! With Jackman being nominated on the Comedy/Musical side, there was an opening in the Drama Actor category, an opening you might've guessed would go to Hitchcock favorite Hopkins. But it didn't. Gere, who got good buzz for the indie Arbitrage and who's been the beneficiary of a diligent awards-season campaign, took the slot instead.

9. Matthew McConaughey?! Jack Black, not McConaughey, got the Bernie love; Magic Mike got zip. File this one under "Wait till next year."

10. Maggie Smith?! Nomination for Downton Abbey? Check. Nomination for the Globes bait that is The Best Exotic Marigold Hotel? Nope. Instead, Smith earned her film acting nod (in the Comedy/Musical Actress category) for the off-the-radar ('til now) Quartet, which marks the directing debut of Dustin Hoffman.

11. Anna Karenina Dies—Again! If this once-promising contender couldn't win over Globe voters, and it didn't, aside from a single nod for its score, then it's not going to win over anybody.

12. Beasts of the Southern Wild?! You know how some movies are just not Oscar movies? (We mean besides action movies…) This movie would be an example of the kind of film that's just not a Golden Globes movie. The no-budget wonder, which should still figure into the Academy Awards, got nothing from the HFPA.

13. Tommy Lee Jones: Yes, he got nominated for Lincoln, but he was also very good in Hope Springs, which the Globes saw fit to honor with a Comedy/Musical Actress nod for Meryl Streep. Like Ted and This Is 40, Jones got taken out in the Comedy/Musical Acting category by Salmon Fishing in the Yemen (in the form of Ewan McGregor).

14. Burlesque?! Sure, the Salmon Fishing in the Yemen fixation is weird, but it's not laughable. Whatever happened to the fun Golden Globes?