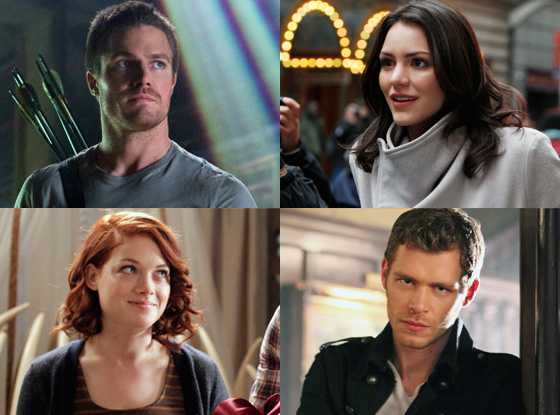 In today's Spoiler Chat, we've got relationship dish on a few couples, including The Vampire Diaries' Caroline and Klaus, a Suburgatory duo and a fan favorite on Teen Wolf. If romance isn't what you're into right now (to quote New Girl's Jess: "Ugh, couples!"), we've also got scoop on Arrow, Smash, 666 Park Avenue and more!

Grizzelle: I need some Arrow scoop Please!!!! I've become so obsessed with this show, it's easily my favorite new show of the year.
Join the club! Arrow has also shot us through our TV-lovin' hearts. In episode 12, we're going to meet Laxer, who will be a potential recurring villain for our hero, Oliver Queen. And he's not some run-of-the-mill nemesis; he's intense, scary and a real badass. Better start going more sit-ups, Ollie! You know, to help mankind.

Get caught up on all of our Spoiler Chats here

Nelson22: Do you have any scoop on Tyler, Caroline and Klaus on TVD?
Klaroline fans, you may want to stand up before reading this next tease as you'll probably start doing a happy dance while reading it: Klaus will continue to drive a wedge between Caroline and Tyler (using his powers of evil, obvs) and he'll be pretty successful as he manages to land the reigning Miss Mystic Falls as his date to this year's pageant!

Sarah: Ryan and Tessa were so cute in Suburgatory's most recent episode! What's next for the duo?
Varsity jackets and school rings! (That's still what they do in the suburbs, right?!) At the premiere of her Halloween flick Fun Size, Jane Levy dropped one doozy of a tease: "Ryan and Tessa start to date!"

Vote for fall TV's most shocking moment so far

Trish in Toronto: I cannot wait for Smash to return. Got spoilers?
Season one of Smash gave us Joe DiMaggio starring in Bombshell, but it sounds like Julia and Derek might be reworking the show to give us another famous Marilyn Monroe man. In season two, Bombshell will be looking for someone to play President Kennedy! And we already know that Karen can pull off the "Happy Birthday" song, right? 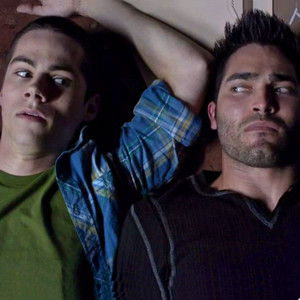 Fernanaberry: Any scoop on my favorite Teen Wolf couple Sterek?
Sadly no, but we can tell you that the MTV hit series is currently looking to cast the role of the strikingly beautiful Heather, a long-time friend of Stiles who is celebrating her 17th birthday. Also popping up in Beacon Hills is the mysterious and raven-haired Cora, a beautiful young woman who's been hardened by a life on her own and has secret ties to the town's werewolves.

Carson: I'm really enjoying 666 Park Avenue! Any scoop on what's ahead?
Episode seven will be a big episode for Jane as it will further explain her personal connection to The Drake. Also coming up? Trouble in Jane and Henry's relationship as one-half of the gorgeous duo wants to high-tail it back to Indiana. Too bad the other one is currently loving New York City and the powerful connections it provides. (Can you guess who wants to stay?)

Meet the cast of Teen Mom 3

Maryanne: I never get Bunheads scoop…what gives?
It's because we were waiting to drop this gem on you. In the new season (premiering on ABC Family on Jan. 7), there is an episode called: "Channing Tatum is a Fine Actor." Now if only we can get Mister Magic Mike to guest star….

Check out all of The Vampire Diaries' OMG moments

TAGS/ TV , Top Stories , Watch With Kristin , Spoiler Chat , Exclusives
GET POP CULTURED!
*Email entered incorrectly. Please try again.
By subscribing to our newsletter you agree to the Privacy Policy and Terms of Use
Daily
Weekly