Why We Need More Movies About Guys on Bikes 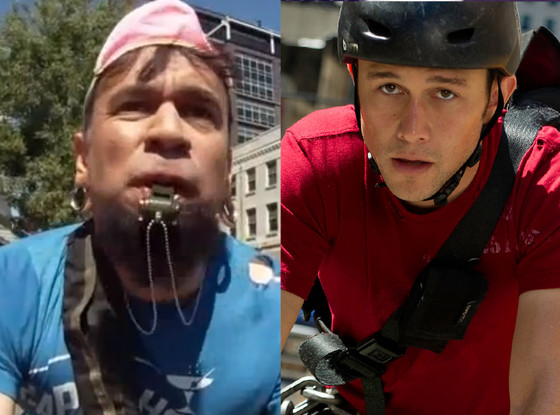 As anyone who's discovered the calf-muscle-enlarging, carbon-footprint-reducing, post-hipster joys of fixed-gear cycling can attest, it's about time Hollywood gave us a good movie about it.

Which is why we're stoked to see Joseph Gordon-Levitt donning a helmet and fearlessly dodging cab doors all over Manhattan in the new David Koepp-directed actioner Premium Rush.

On the surface, it looks like a relatively shallow, splashy, ordinary-dude-swept-up-in-a-deadly-scandal genre picture, but we reckon an intellectually driven actor like JGL wouldn't sign on for no throwaway bikesploitation garbage.

Why'd we have to wait so long?

It could be that the shoddy performance of previous cycling-themed movies has made studios skittish when it comes to two-wheeling at the multiplex. The last time a hot twentysomething leading man pedaled through city traffic with a comparable level of sexy, handlebar-gripping aplomb was when Kevin Bacon—in his first role following megahit Footloose—shredded the hilly streets of San Francisco as a stock trader-turned-bike messenger in 1986's Quicksilver. Those of us old enough to remember seeing that sad thing in the theater consider it our duty to tell those of you young enough to rent Footloose instead to do exactly that.

There is, of course, Breaking Away. That 1979 film provided everyday cyclists with a rich coming-of-age story that referenced the liberating bliss of road biking to inspirational effect. It also earned a well-deserved Academy Award for Best Original screenplay. But the culture of cycling has transformed several times over since that Jimmy Carter-era gem, and no amount of teary underdog triumph can fully transcend the dated spectacle of Jackie Earle Haley as Moocher.

See how the Catching Fire cast is shaping up

Needless to say, bike documentaries don't count. Yeah, there have been lots of credible films about all kinds of biking, from BMX lifers on the West Coast to iconic European cyclists like Eddy Merckx and Graeme Obree. But those don't really give today's fixie freaks the kind of fantastical, self-indulgent stories they deserve, something to celebrate beyond their own superior taste in shoulder bags. What they need is a contemporary blockbuster that turns a 21st-century bike nerd into a hero of Bourne proportions.

If Premium Rush doesn't quite satisfy that need, we won't hold it against Joseph Gordon-Levitt personally. He's already represented pretty well for hard-boiled fiction dorks (Brick) and cancer patients (50/50)—two subsets of the population that certainly could use a modern-day screen idol of their own.

And for urban cyclists with enough self-effacing humor, there's still hope that Hollywood will come around to see the potential in a feature-length epic about Fred Armisen's prototypical bike-tivist from TV's Portlandia.

See all The Best Things in Pop Culture This Week

TAGS/ The E! List , Top Stories , Movies , Features , Joseph Gordon-Levitt
GET POP CULTURED!
*Email entered incorrectly. Please try again.
By subscribing to our newsletter you agree to the Privacy Policy and Terms of Use
Daily
Weekly