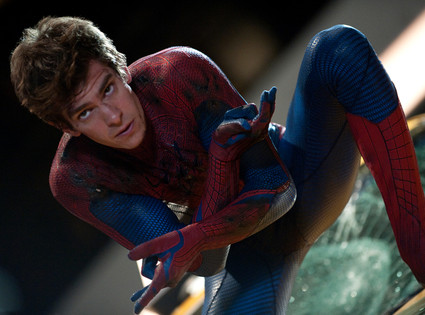 Review in a Hurry: Though the very idea of rebooting Spider-Man only five years after the last sequel enraged geeks everywhere, The Amazing Spider-Man is just that. Andrew Garfield is less the so-earnest-it-hurts Peter Parker that Tobey Maguire portrayed, and more the wouldn't-it-be-cool to actually be Spider-Man variety.

READ: The Amazing Spider-Man Off to "Healthy" Box-Office Start—Yes, Already

The Bigger Picture: The worst that can be said about The Amazing Spider-Man is that if not for an emotionally invested Martin Sheen as Uncle Ben, the origin plot feels unnecessary. Part of this is because—and here's where the fans are right to complain—we just saw Parker bitten by a radioactive spider in 2002. The other is that the new back story involving the mystery of what happened to Peter's parents is done via lame flashbacks and never really pays off.

However, once Spidey starts experimenting with his newfound abilities, director Marc Webb spins a web of pure popcorn fun.

Spider-Man himself much funnier. Meaning, he's actually funny this time. Not just with snappy one liners,  but moments that are lighthearted, too.

Starting with Garfield, the whole cast is strong. His Parker is still an insecure angsty teen, but not so much that you can't suspend disbelief that he could land adorable classmate Gwen Stacy (Emma Stone). With Garfield 28, and Stone 23, they look like they haven't attended a high school in years. Thankfully, both are funny, charming and together have plenty of chemistry. Rhys Ifans convinces as Dr. Curt Conner/The Lizard.

The special effects work trumps the previous films, which should surprise no one since effects have come a long way since 2007's Spider-Man 3. The highlight is a fight between Spidey and The Lizard in a library with a great surprise cameo.

Though the plot is pretty much the same as the Maguire original, there are tweaks. Spidey still wears the mask (most of the time) but the whole secret identity thing is mercifully toned down. While The Lizard has no love for the wall crawler, his ultimate goal is not the de facto kill Spider-Man angle. Parker is very much a science geek, fashioning his own web-shooters like he did in the original comics. Let's hear it for staying in school! Finally, Gwen Stacy isn't merely a damsel in distress, but she's also quite brave.

Through it all, Spidey swings to and from danger with the ease of good stuntman. Some shots do look computer-generated though. Still, there's such propulsion and weight to him that he feels absolutely real.

The 180—a Second Opinion: The score by James Horner, like the one Danny Elfman did for the earlier installments, is pretty forgettable. A rousing theme for the webslinger still evades this series.