Tintin: Five Things You Need to Know About the Comic-Book Hero 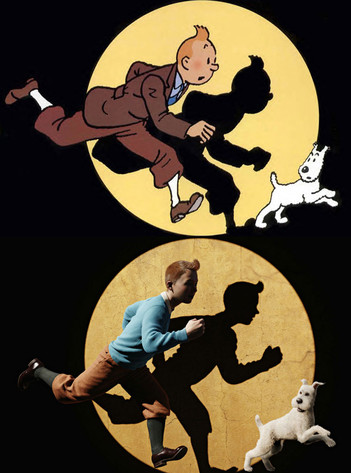 You've seen the trailers, listened to filmmakers Steven Spielberg and Peter Jackson and heard tell that this Tintin character is quite popular in some places.

So who is he, and why should you care? Read on as our resident Tintin nerd gives you the facts you need before heading in to see The Adventures of Tintin, which opens Tuesday.

REVIEW: How good is Spielberg's Tintin?

1. Tintin Is Ageless: Created in 1929 by Belgian cartoonist Georges Remi (aka Hergé), the original comic strips were black and white and cranked out for a children's newspaper supplement that Remi edited (which may explain the rambling nature of some of the tales). Remi, himself unsure of how old Tintin was supposed to be, gave the character's age as roughly 13 or 14 at the start and a few years older by the end. That must explain how the kid with no family was able to pick up skills like piloting planes and helicopters, racing cars, motorcycles and tanks and performing the duties of an astronaut (along with his dog). Also, for a youngster, he's pretty good with his fists—and a pistol.

2. Tintin Needs a Visit from Child Protective Services: Only in a comic strip could a boy with no parents, a demanding job and an alcoholic sea captain for a best friend be considered family entertainment. That said, this boy reporter—who frankly never, ever seems to file a story—creates a family of his own over the course of his 23 adventures, including a range of pals that include a pair of near-identical policemen, Thompson & Thomson (who are not twins, though—note the differently spelled names); a clumsy, hard-of-hearing scientist and inventor, Professor Calculus; and drunken sailor Captain Haddock, who spews the most colorfully G-rated curses in comics. Plus, Snowy, arguably the best of the always famished, sass-talking comic pet. (Yeah, we said it, Garfield.)

3. Tintin Gets Around: From the Soviet Union and Shanghai to chasing a Chicago gangster into the fading American West, this Belgian kid has traveled all over the world—and beyond (see: Destination Moon). And while some of his capers have occurred in purely made-up lands like Borduria, Khemed, Syldavia and Nuevo Rico, the results aren't always to everyone's liking. To wit, his journey to the real-life Congo reportedly features such unpleasant racial stereotypes (not to mention a later-replaced scene in which he blows up a rhino with a stick of dynamite) that it's no longer published.

4. Tintin Is Controversial: As mentioned above, Tintin's Congo adventures have been deemed too unpalatable to merit publishing anymore, but some critics further argue that the books teem with broad, bigoted stereotypes of the many races Tintin, Captain Haddock and Snowy encounter in their journeys. As well, Hergé continued to publish his works while under German occupation of Brussels during World War II, leading to accusations of being a collaborator and/or Nazi sympathizer. Though he was cleared of the charges eventually, the taint never completely washed away. Supporters, however, point out that while the books do contain some stereotypes, the character of Tintin himself acts consistently as a moral, upright and unbigoted friend to people of all races (if not rhinos), something of a rarity in the days the books were written.

5. Tintin Is Hugely Popular: Not only have the 23 adventures remained in print over the years, but the tales have been adapted before, as an animated TV show, a BBC radio adaptation, a pair of French live-action films and much more. But as cool as the new film looks in its behind-the-scenes motion-capture makings, it's hard to top Hergé's simple drawings of a boy, his dog and his often-drunken pal traipsing through the jungles, the snowy mountains and the barren moonscape for adventure at its best.