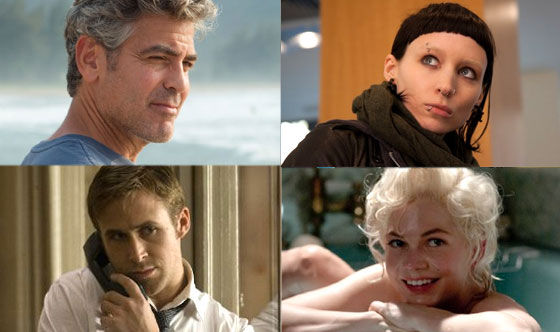 It was a good day to be Ryan Gosling and George Clooney. It was a better day than yesterday to be The Girl With the Dragon Tattoo.

Gosling and Clooney were among the top—and repeated—Golden Globe nominees, while the much-hyped, but SAG-snubbed David Fincher film got back in the game, to a point.

A look at what went down:

MORE: Get all the Globe nominees

In the glamour Best Motion Picture, Drama category, the Clooney-directed political drama The Ides of March will go up against the Clooney-starring dramedy The Descendants.

The Help, Martin Scorsese's Hugo, Moneyball and Steven Spielberg's War Horse were nominated, too, despite their lack of a certain silver-haired multihyphenate.

In other Clooney news, the star was nominated for Best Director (Ides of March), Drama Actor (The Descendants) and Best Original Screenplay (Ides of March).

Gosling, who was shut out at the SAGs, but otherwise has been an awards-season player, will go up against Clooney, his Ides of March costar, for Best Drama Actor.

In a mild upset, Gosling's second nomination was not for Drive, but for the previously unheralded Crazy Stupid Love. Gosling is the only actor nominated in both the dramatic and comedy-musical fields.

The Girl With the Dragon Tattoo, meanwhile, which has run hot and cold, was warm-ish at the Globes.

The film picked up two nominations: one for Original Score, and one key one for breakout star Rooney Mara (Best Drama Actress). But it failed to rate in any of the other big-boy categories, including director, screenplay and film.

Overall, the Hollywood Foreign Press, which typically can be counted on for a jaw-dropper or three, played things straight.

Oscar favorite The Artist led all films with six nominations, including ones for its leads, Jean DuJardin and Bérénice Bejo. The Descendants and The Help nabbed five each.

The Artist, 50/50, Bridesmaids, Woody Allen's Midnight in Paris and My Week With Marilyn are up for Best Motion Picture, Comedy-Musical.

50/50's Joseph Gordon-Levitt was a happy, but not crazy surprise in the Best Comedy-Musical Actor category. Midnight in Paris' Owen Wilson also popped up there, a rare individual nod for the star.

Kristen Wiig, denied by the otherwise-Bridesmaids-boosting SAGs, is up for Best Comedy-Musical Actress. Outside of My Weekend With Marilyn's Michelle Williams, Wiig's competition is not exactly the same-old, same-old: Charlize Theron, up for Young Adult; and Jodie Foster and Kate Winslet, both for Roman Polanski's Carnage.

Angelina Jolie picked up a nod via her directing debut, In the Land of Blood and Honey. The Bosinan War drama was nominated for Best Foreign-Language Film.

Elton John, Madonna, Chris Cornell and Mary J. Blige, names usually found at the Grammys, all turned up in the Original Song category for their contributions to Rango, W.E., Machine Gun Preacher and The Help, respectively.

Elsewhere, the TV categories featured a mix of the old-ish and the new.

Glee and Modern Family are up for Comedy Series, alongside Matt LeBlanc's Episodes, Laura Dern's Enlightened and Zooey Deschanel's New Girl. LeBlanc, Dern and Deschanel are all individual nominees, too.

Boardwalk Empire and Game of Thrones will vie for Drama Series against newbies American Horror Story, Boss and Homeland.

The 69th Annual Golden Globes are set for Jan. 15. Ricky Gervais will be back as host—consider yourself warned.