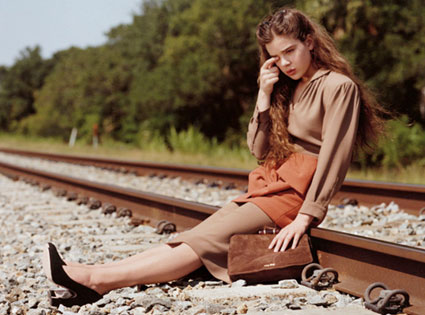 Talk about the wrong side of the tracks.

By now, we're used to hearing about high fashion ads featuring barely out of their preteens stars dressed a little too provocatively for the world's comfort, but the latest Miu Miu ad—which, true to form, stars 14-year-old Hailee Steinfeld—is not one of those ads.

No, there's no perfume bottle covering her lady bits, she's not scantily clad, provocatively posed, or Photoshopped beyond recognition, and yet the Oscar nominee's fashion campaign has still joined the ranks of ads banned in Britain. So what gives?

Like we said, talk about the wrong side of the tracks.

Believe it or not, the U.K.'s increasingly fervent media watchdog, the Advertising Standards Authority, took the banning action after receiving a complaint that the photograph, shot by fashion vet Bruce Weber, was "irresponsible" for seemingly suggesting youth suicide.

MORE: What got Julia Roberts and Christy Turlington banned?

Apparently, Steinfeld's atmospheric yet obviously unwise pose—sitting alone on a railroad track—appeared to some as though she was waiting to be struck. Add to that the fact that the teen is also wiping her eye in the shot, and some critics have determined that to suggest that she was crying (rather than wiping a little True Grit from her eye) and thus, suffering from depression.

Some people certainly have a lot of free time on their hands.

As for the ASA, they rejected the complaint that the imagery was irresponsible, but nevertheless banned the ad after determining that the shot broke industry codes by showing a child in an unsafe location.

"Because the ad showed Hailee Steinfeld, who was 14 years of age only when the photo was shot, in a potentially hazardous situation sitting on a railway track, we concluded the ad was irresponsible and in breach of the code in showing a child in a hazardous or dangerous situation," they ruled.

MORE: Talk about shocking fashion! Which pop star is wearing f--k off shoes?!

For the Prada-owned company's part, they defended the campaign, saying its intention was to portray Steinfeld as an actress waiting in between takes on a film set, and was part of "a serious, high-fashion campaign aimed at adult women" that was placed only in adult-, rather than teen-skewing, publications.

They further argued that lounging on abandoned train tracks wasn't unsafe since Hailee "could have easily moved from where she was sitting because she was not restrained in any way."

Sounds like someone's train has definitely left the station.

TAGS/ Fashion , Hailee Steinfeld , Top Stories
GET POP CULTURED!
*Email entered incorrectly. Please try again.
By subscribing to our newsletter you agree to the Privacy Policy and Terms of Use
Daily
Weekly