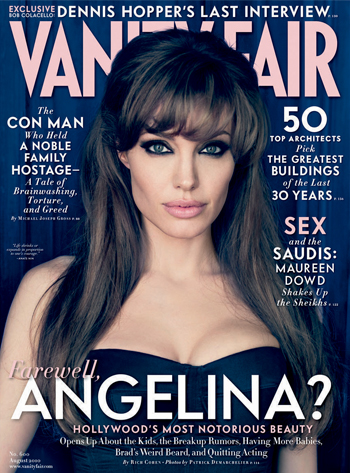 Angelina Jolie is on the cover July's Vanity Fair, and inside she talks about the upcoming Salt  while looking like a beautiful, alien goddess, according the writer Rich Cohen.

And yes, Mr. Cohen has much to say about the god-like status of Angie, pages and pages of it.

But before we get to that, what doesn't she talk about?

Let's get this out of the way now: the Jennifer Aniston situation never comes up. Not even once. So the human race has moved on—yay!—but what does that leave us to talk about?

Why, Angie's "happy home" filled with children who all sleep in one giant custom bed. In fact, they've got so much family sleep is going on that she and Brad are "thinking of building a room just for family sleep." Fun!

When asked what she thinks her kids will be when they grow up, Angelina gushes:

"Mad's a real intellectual, which I can take no credit for genetically. He's great at school, great at history. He feels like he could be a writer or travel the world and learn about places and things. Zahara's got an extraordinary voice and is just so elegant and well spoken. Shiloh's hysterically funny, one of the goofiest, most playful people you'll meet. Knox and Viv are classic boy and girl. She's really female. And he's really a little dude."

Eek! What about Pax? It's okay, six kids is a lot to remember, and that's one reason why the Jolie-Pitts are holding off on adding more for now.

"We want to make sure we don't build a family so big that we don't have absolutely enough time to raise them each really well," she says.

Other things Angelina is not doing right now: marriage and co-starring with Brad in another movie.

"We're not against getting married," she explains. "It's just like we already are. Children are clearly a commitment, a bigger commitment [than marriage]. It's for life."

The reason she's not co-starring with Brad just yet is a little more complicated.

"We like working together, but we work together every day," she goes on. "We're building the most important thing together. A family. We have great adventures, we have travel. We're raising children. So we don't need to take away from that to express it on film."

She also spends a large portion of the interview preparing us for her eventual departure from Hollywood, saying things like "I don't think I'll do it much longer" and "[Brad and I] will do films for the next few years, then we'll do something else."

What would we do without Brangelina?! Then we'd just have Robsten. Maybe we'd all survive somehow, but we'll believe this retirement thing when it happens! 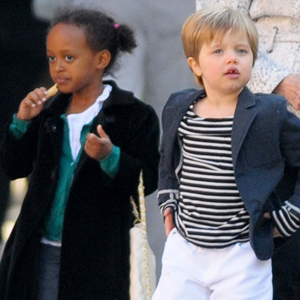 And now for the question we've all been waiting for: What's up with Shiloh's boy clothes?

"Shiloh, we feel has Montenegro style. It's how people dress there. She likes tracksuits, she likes [regular] suits. So it's a suit with a tie and a jacket and slacks, or a tracksuit. She likes to dress like a boy. She wants to be a boy. So we had to cut her hair. She likes to wear boys' everything. She thinks she's one of the brothers."

Well, Angie seems cool with it so the rest of us can probably just chill out now. What a relief.