Jimmy Fallon, Will Ferrell and Kristen Wiig’s "Soap Opera" Will Make You Laugh Out Loud 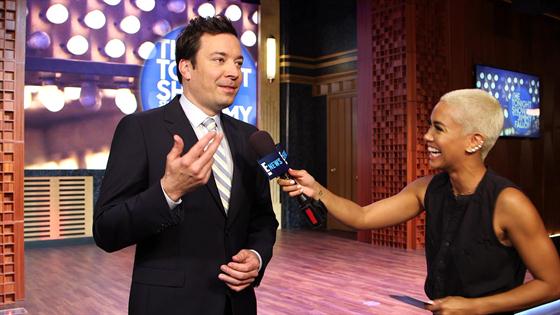 Now Playing
Up Next
How Well Does Jimmy Fallon Know New York City?

This is just what we needed.

On Wednesday, Jimmy Fallon, Will Ferrell and Kristen Wiig teamed up for a hilarious virtual soap opera skit on The Tonight Show Starring Jimmy Fallon. Joining from their respective homes and donning some dramatic wigs, the Saturday Night Live alums introduced the world to "The Longest Days of our Lives" and brought tons of laughs.

Kicking things off was Jimmy, who was wearing a shaggy blonde wig and playing the role of Winston. Immediately, he confronted Kristen's character Vanessa and asked if she had been hiding something from him. Much to his surprise, she revealed that she had been having an affair with his brother.

"How could you?" the late night host shouted. "I mean, how could you? We're all social distancing. Was it through, like, Skype or something?"

Entering the frame next was Will's character Alejandro. Sporting an ill-fitting black wig, he denied the cheating allegations. Adding a layer of dramatics, Kristen chimed in, "No, it was not Alejandro that I cheated on you with. It was…another brother." 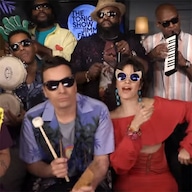 Confused, Jimmy replied, "Another brother? I don't have another brother." As the music picked up, Will informed the funnyman of their secret other brother Montgomery and went off camera to change his costume. Wearing the same wig and a mustache, the Anchorman star transformed into the new character. "Hello, Winston, I'm Montgomery," Will said. "You're long lost other brother."

After Jimmy and Kristen gasped in shock, the Wonder Woman: 1984 star revealed that Montgomery wasn't the other brother she had an affair with. "There's another other brother," she warned. And, before they knew it, Will had another costume change. This time, he was Fontaine, who happened to be Winston's evil twin, and wearing a blue scarf and cowboy hat.

Following his introduction and confession to cheating on Vanessa, a fight erupted between the trio. Since they were not all in the same room, they had to get creative with their moves. As the sound of dramatic slaps played, Jimmy, Will and Kristen each took turns pretending to slap each other and themselves in the face.

Once the fight was over, Will revealed that he was after the family fortune and held up a roll of toilet paper. As he and Jimmy discussed it, Kristen reemerged as Melinda Charmin, the heiress of the Charmin toilet paper fortune.

Watch the video above to see what happens next!