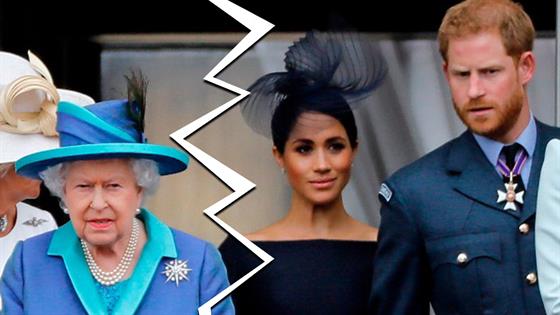 Meghan Markle and Prince Harry are set to live a very different life, a much more private one, following their split from the royal family.

More than a week after the couple's unilateral announcement that they are stepping down as "senior royals," seek to work to become financially independent and raise their son Archie Harrison in both the U.K. and North America, Queen Elizabeth II and Buckingham Palace announced on Saturday details of an agreement reached regarding the couple's future. Here is what we know:

1. "His and Her Royal Highness" Are No More: "The Sussexes will not use their HRH titles as they are no longer working members of the Royal Family," read a statement from Buckingham Palace.

Harry and Meghan, however, be able to retain their titles despite not using them. Harry remains a prince and will still be known as Harry, Duke of Sussex, while his wife is Meghan, Duchess of Sussex.

2. Paying Back the Millions on Frogmore: "The Duke and Duchess of Sussex have shared their wish to repay Sovereign Grant expenditure for the refurbishment of Frogmore Cottage, which will remain their U.K. family home," the statement said.

Last year, as part of their bid to create a separate royal household, Meghan and Harry moved out of Nottingham Cottage in the Kensington Palace complex, where his brother Prince William lives with wife Kate Middleton and their three kids in a massive apartment, and into Frogmore Cottage at the Queen's Windsor estate. But before they made the big move, they renovated the new residence...at the cost of £2.4 million (over $3 million) in taxpayer funds.

This week, it was reported that members of Frogmore's staff have been reassigned.

3. No More Public Funds, Period: "They will no longer receive public funds for Royal duties," the statement said.

This does not mean Meghan and Harry will not be able to receive private funds from his father through his income from the Duchy of Cornwall.

4. Bye-Bye Royal Duties and Military Appointments: "As agreed in this new arrangement, they understand that they are required to step back from Royal duties, including official military appointments."

Harry, who had actually served in the British military, will no longer be known as Captain General of the Royal Marines, a ceremonial title he was given in 2017 while succeeding his grandfather and the Queen's husband, Prince Philip, the Duke of Edinburgh, who at age 98, is retired from royal public life.

"The whole situation is extremely sad, and I think it is unfortunate, after his splendid service in the military, that he will now no longer be involved with the military in the U.K.," Alan West, former head of the Royal Navy, told ITV News' royal reporter Chris Ship.

Another title Harry is expected to lose: Commonwealth Youth Ambassador.

5. ...But Will Maintain Private Patronages: "With The Queen's blessing, the Sussexes will continue to maintain their private patronages and associations," the statement said. "While they can no longer formally represent The Queen, the Sussexes have made clear that everything they do will continue to uphold the values of Her Majesty."

6. Changes to Be Implemented This Year: "This new model will take effect in the Spring of 2020," Buckingham Palace's statement said.

7. Queen Praises Meghan and Wishes the Family the Best: Harry and Meghan made their decision to step down as senior royals amid a couple of years of intense public scrutiny and much negative press about the duchess, who has also been the target of racism and sexism by U.K. tabloids and social media users.

In her statement, the Queen wrote, "Harry, Meghan and Archie will always be much loved members of my family. I recognise the challenges they have experienced as a result of intense scrutiny over the last two years and support their wish for a more independent life. I want to thank them for all their dedicated work across this country, the Commonwealth and beyond, and am particularly proud of how Meghan has so quickly become one of the family. It is my whole family's hope that today's agreement allows them to start building a happy and peaceful new life."

"In line with the statement by Her Majesty The Queen, information on the roles and work of The Duke and Duchess of Sussex will be updated on this website in due course," a statement read. "We appreciate your patience and invite you to explore the site to see the current works of Their Royal Highnesses."

9. What About Security? "Buckingham Palace does not comment on the details of security arrangements," the statement said. "There are well established independent processes to determine the need for publicly-funded security."

10. What About Sussex Royal? The palace did not comment on whether Meghan and Harry can use the name they have chosen for their household, or the website that was recently created for it.

11. Are Meghan, Harry and Archie Actually Moving to Canada? After the Sussexes' initial exit announcement, it was speculated that when they said they would live partially in North America, they mean Canada, where Meghan lived for years when she worked as an actress on Suits, and where the family vacationed for six weeks over the holidays. The palace has not commented on such speculation. Meanwhile, as of Saturday, Meghan and Archie remain in Canada, while Harry is still in the U.K. after meeting with the queen, his father and his brother about the royal exit, and reportedly has other types of meetings scheduled on Monday.