Ten years after Friends ended its 10 season run, Jimmy Kimmel asked Jennifer Aniston, Courteney Cox and Lisa Kudrow to reprise their respective roles as Rachel Green, Monica Geller and Phoebe Buffay from the hit sitcom. "I love this show so much that I actually wrote some fan faction," he told Aniston, who appeared on Wednesday's show to promote her new movie, Life of Crime. "I was just wondering if...you would do the scene from it with me." Aniston then asked, "You mean like read lines with you?"

Kimmel replied, "A little bit more than that." Aniston asked for specifics while leafing through the script. "Like a lot more than that," the TV host confessed as a recreation of Monica's apartment was unveiled. "I actually spent $80,000 making it to the T," Kimmel, 46, said of the set design. "Every detail is correct."

He volunteered to play Ross Geller, David Schwimmer's character. Before they ran lines, however, Kimmel said he "forgot" an item and gave Aniston a Rachel wig. "I've gotta have boundaries," she said.

A wigless Aniston then got into character. "Ross, you look sad today. What's the matter?" she asked.

"Rachel, we haven't made love in months," Kimmel replied. "How about we make love right now?"

Unimpressed with the script, Aniston told her friend, "Jimmy, I know that's my line but this is a really stupid line. It's dumb. It's really dumb." He countered by asking, "Is it dumber than living in a huge apartment in New York City for eight years even though you work in a coffee shop?" She conceded and agreed to keep going.

After their repeated "love making," they planned to have Monica and Phoebe over for breakfast.

Enter Cox, who walked through the iconic purple door to thunderous applause. "Are you kidding me? Now you dragged Court into this?" Aniston asked. Kimmel replied, "That's not Court. That's Monica."

Cox got down to business, saying, "Hi, Ross. Everyone down at Central Perk is talking about how good you are at making love...You're said to be so good at it that sometimes I wish you would make love to me." Kimmel said, "But Monica, I can't make love to you. You're my sister." Her relieved reply? "Darn."

VIDEO: Find out what Jennifer Aniston thinks about plastic surgery 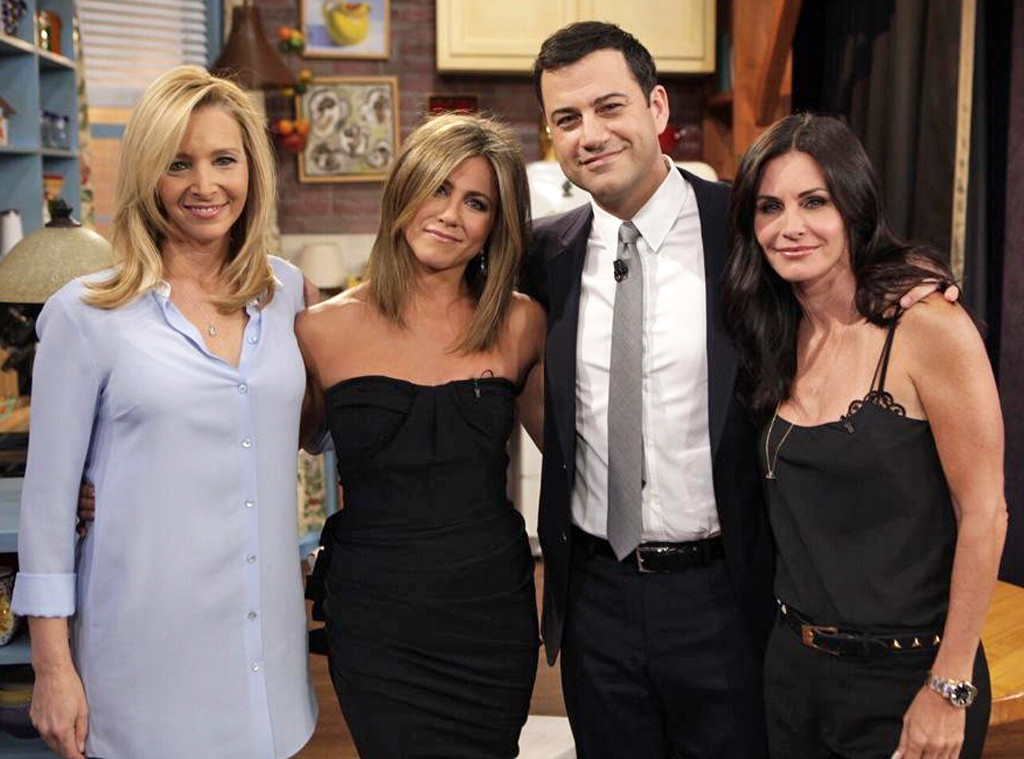 As Aniston complained again about the absurdity of Kimmel's script, Kudrow stepped into the scene. "Hey, are you guys talking about how good Ross is at making love without me?" she asked in character.

Kudrow was asked to say, "How you doin'?," a line made famous by Matt LeBlanc. "Wait, that's Joey's catchphrase. Why am I saying it?" she asked. Kimmel replied, "Because I wrote the script and there is no Joey anymore, that's why." Wait, what?! "Marcel the monkey bit them and gave them monkey rabies and they died," he said of LeBlanc and Matthew Perry's characters. "Now can everyone please try acting like you've been on a TV set and read the lines? This isn't some kind of improv camp. This is television."

The script also included lyrics from the theme song, "I'll Be There for You," by The Rembrandts.

To find out how the sketch ends, watch the clip now!