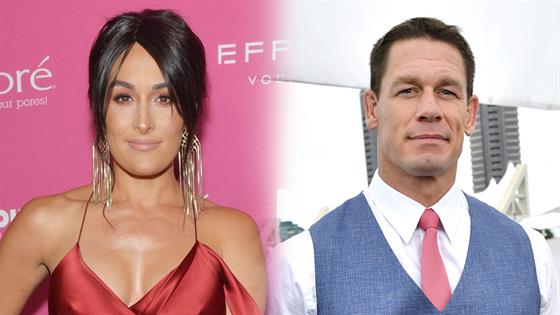 A heart to heart.

Nikki Bella opened up about life in the public eye on the latest episode of The Bellas Podcast, explaining that one of the things she struggles the most with is her relationships being subject to constant speculation.

The former WWE star and her sister Brie Bella were interviewing The Bachelor's Hannah Ann Sluss, who's recent stint on the show forced her into a similar situation.

"I can imagine 'cause, you know, even myself going through a public break up, that was difficult," Nikki told Hannah Ann, seemingly referring to her split from John Cena. "And what was tough about that was it came out before a season went on air so people thought that it was a publicity stunt. Like it was fake just to get people to tune in."

She acknowledged that Hannah Ann's situation appeared to be particularly difficult because she couldn't do or say anything that spoiled Peter Weber's season of The Bachelor.

"And mine was different than yours because I was going through pain of like, 'No, this is real. I'm not lying,'" Nikki said. "But I couldn't imagine having to keep that in and being like, 'Well, tune in! You'll see if we get engaged!'" 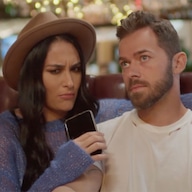 Total Bellas fans will recall that Nikki and John broke off their engagement in April 2018. However, she explained to Hannah Ann that she's still dealing with the fallout to this day.

"I'm always constantly going to Brie, like, 'Am I ever gonna get away from this?' And Artem [Chigvintsev, Nikki's current fiancé] will deal will stuff, and I even know that my ex-fiancé will still deal with stuff," Nikki said. "And it's hard."

She continued, "It's been, what? Almost three years? Two-and-a-half years? And we still have it. I feel like I'm gonna have this triangle for the rest of my life. And so I just try to have this shell that fights it all. Because it used to get to me really bad, for a long time."

Luckily, Nikki's come a long way—something that's become clear on the new season of Total Bellas. On the podcast, she and Brie discussed last week's episode, which showed her clashing with her mom, Kathy Colace, over whether or not to include Artem in a family portrait they were planning to take.

Though the matter was settled and Kathy and Artem even joined the podcast to clear the air, the conversation included another mention of John, as he's in a number of family photos.

"I just wanna say this. I had to take my wedding picture down, and it's the only picture I have with Bryan's side of the family and my side of the family, all together in one. [It's] had to go into a storage box," Brie said. "Thank you, Nicole."

Nikki's response, however, showcased the progress she's made.

"Okay, but, I have told Brie, and Artem feels the same...like, those are memories," she said. "I won't let my Nana take certain photos down that John's in because those are memories. And he's an amazing man. Just keep it on the wall. I don't mind. Artem doesn't mind. I'm not here to erase memories."

Listen to the entire episode of The Bellas Podcast here!