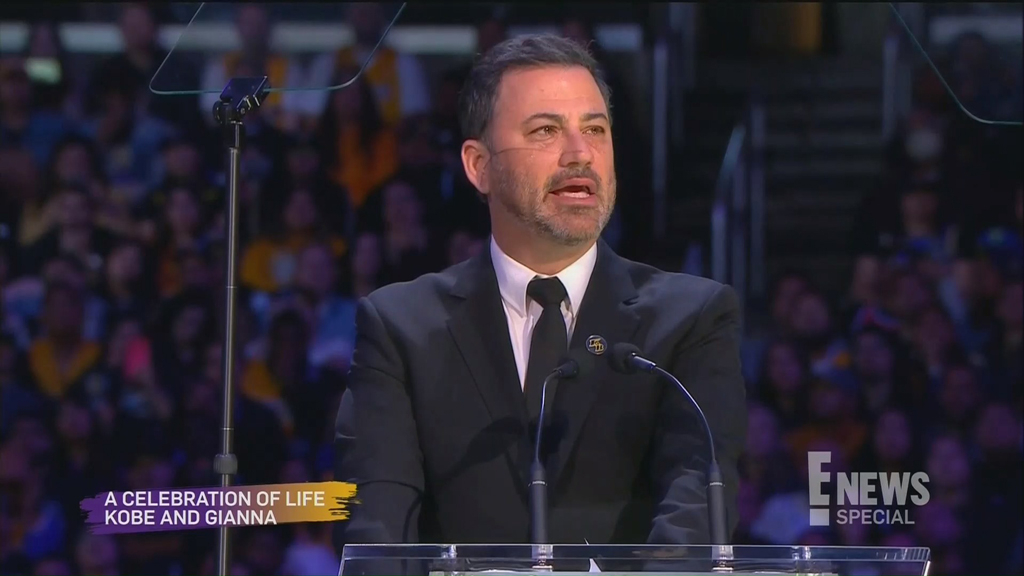 Jimmy Kimmel held back tears as he honored Kobe Bryant and Gianna Bryant on Monday.

Loved ones are gathered at the Staples Center in Los Angeles today to pay tribute to the Los Angeles Lakers legend and his 13-year-old daughter, who lost their lives last month in a helicopter crash in Calabasas, Calif. Kobe and Gianna were two of nine people who passed away in the tragic crash on Jan. 26. Today, Feb. 24, a celebration of life is being held for Kobe and Gianna in downtown L.A., at the place where Kobe built his legacy.

After a heartfelt performance by Beyoncé, late-night host Kimmel, who shared many memorable moments with Kobe on Jimmy Kimmel Live, was introduced.

"This is a sad day. But it is also a celebration of life of their lives," Kimmel said of everyone who passed away in the crash. "And of life itself in the building where those of us who are Lakers fans and Kobe fans celebrated so many of the best times of our lives and I'm honored to have been asked to speak here. The proceeds from the tickets you bought go directly direct to the Mamba and Mambacita Sports Foundation."

"I also encourage you to go to mambaonthree.org to give to the Mamba on 3 Fund, which was created to honor and provide financial support to the Chester, Altobelli, Mauser and Zobayan families," Kimmel continued. "I can only imagine how painful this for them. And I don't think any of us could have imagined this."

"And everywhere you go, you see his face, his number Gigi's face, Gigi's number everywhere, at every intersection there are hundreds of murals painted by artists who were inspired not because he's a basketball player, but because Kobe was an artist too and not just in L.A., across the country and Kobe's hometown Philadelphia, in Italy, in India, Philippines, China, New York, Phoenix, Boston, for God's sake," Kimmel said as the audience laughed. "In places where he would be booed on the court Kobe is missed even the great Boston Celtic Bill Russell wore number 24 and the Lakers jersey to yesterday's game [cheers and applause] I knew he would come to us eventually."

"Today we are joined by Kobe's teammates and opponents alike. His friends, his family and his fans as we try to make sense of what happened to these nine beautiful people who were by all accounts so full of life, who left behind parents, friends, co-workers, classmates, siblings and children," the late-night hosted told the crowd. "I have been trying to come up with something positive to take to take away from this and it was hard because there isn't much, but the best thing I think I was able to come up with is this this. Gratitude."

"It seems to me that all we could do is be grateful for the time we had with them and for the time we have left with each other. And that's all in the Catholic church, you know, which the Bryant family is part of and mass we share the sign of peace," Kimmel said. "This is a moment to hug or shake hands with people around you and it occurred to me that that's something that only seems to happen at church and sporting events with perfect strangers who love the same team are suddenly hugging and high-fiving each other."

Kimmel then told the crowd, "Since we are here today to celebrate I'd like to invite you right now to take a moment to say hello to the people around you, whether you know them or not. To be grateful for life and for the fact that we are all here together.

"Now I'd like to introduce a person who invited us all here today on 2/24 because she knew we needed it," Kimmel said. "We cannot celebrate the lives of Kobe and Gigi and all the people we lost without honoring the woman that Kobe and Gigi loved most please welcome Vanessa Bryant."

You can get more details on Kobe and Gianna's celebration of life, HERE.