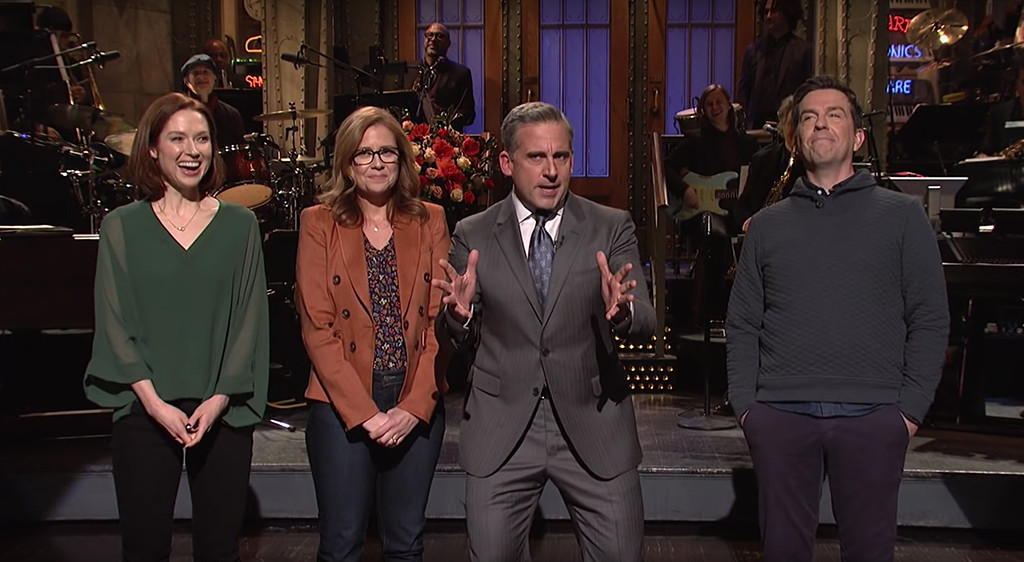 Let's get that money, Steve Carell!

The actor hosted Saturday Night Live for the third time and got to reunite with several of his former co-stars of The Office...while being nagged about rebooting the show. Rumors of reviving the hit NBC comedy series, which ended its nine-season run in 2013 and which starred Carell as lead character Michael Scott, have popped up in recent the years.

"Um, no, actually, I don't think so," the actor said during his monologue. "It was a great experience, I love all those people but I just don't think it's the best idea. I think maybe we should just leave it alone."

"I don't think it would be as good this time around," he continued.

Unbreakable Kimmy Schmidt star Ellie Kemper, who played Erin Hannon on The Office, then stood up among the audience members.

"People would really love to see an Office reboot," she said, drawing cheers. "Especially me, 'cause I really need that money. Let's get that money, Steve!"

Ed Helms, who played Andy Bernard on The Office, then popped up.

"I just don't think you understand how much money we're talking about," he said. "Like, you wouldn't have to do all those sad movies anymore."

"I don't do those movies for money," Carell replied. "I like doing them."

The actor suggested to Helms, "Why don't we just have a party instead?"

"We can all catch up, get together, no cameras, just friends," he said.

Jenna Fischer, who played Pam Beesly on The Office, then addressed Carell.

"Steve, do you remember the last words that Pam secret whispered to Michael as she left for Denver?" she asked.

The actor's wife Nancy Carell, who also played Carol Stills on seven episode of The Office, and their son and daughter John and Annie were then shown.

"We think you should probably do the show," Carell's wife said.

"Uh, Honey, I just I don't want to spend that much time away from you," he told her.

Carell later polled the audience, who responded enthusiastically, and invited the three former Office co-stars to come up on stage so he could make an announcement. 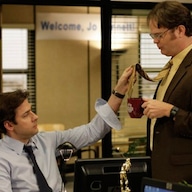 Fischer and Kemper also posted a photo of the four backstage at SNL.

Several Office stars have occasionally reunited over the years since the show's finale. In fact, there was another mini cast reunion on Saturday; Angela Kinsey hung out with former Office co-star Kate Flannery and Jane Lynch at one of their A Swingin' Little Christmas shows in Southern California.

Last month, Esquire quoted Carell as saying, "Because The Office is on Netflix and replaying, a lot more people have seen it recently. And I think because of that there's been a resurgence in interest in the show, and talk about bringing it back. But apart from the fact that I just don't think that's a good idea, it might be impossible to do that show today and have people accept it the way it was accepted ten years ago."

"The climate's different," he continued. "I mean, the whole idea of that character, Michael Scott, so much of it was predicated on inappropriate behavior. I mean, he's certainly not a model boss. A lot of what is depicted on that show is completely wrong-minded. That's the point, you know? But I just don't know how that would fly now. There's a very high awareness of offensive things today—which is good, for sure. But at the same time, when you take a character like that too literally, it doesn't really work."