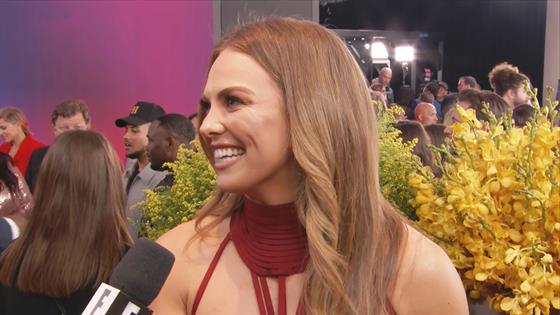 Additionally, celebs like Sarah Hyland, KJ Apa, D'Arcy Carden, Rob Riggle, and David Spade are set to present at the PCAs, as well as sports stars Alex Morgan and Coco Gauff. And if that wasn't exciting enough, Kelsea Ballerini and Alessia Cara will take the stage to perform during the award show.

So, we think it's safe to say this show is going to be jam-packed with exciting moments! While you're watching the ceremony at home, E! News is going to be bringing you all of the behind-the-scenes details that you won't be able to see on TV! Get the scoop below!

Cole Sprouse is escorted to his table, which he's currently the only one at. He looks up at the screen as they show the Vanderpump Rules cast on the red carpet. He later is spotted taking a photo with a very excited and thankful fan.

Brittany Snow links arm with her fiancé as they enter the ballroom and find their table.

Erika Jayne spotted taking a pic with a fan.

D'Arcy Carden runs up to two girlfriends she sees and they're standing around chatting.

Deena Cortese from Jersey Shore walked over to say hi to Cole and they're talking right now and posed for a cell phone pic together.

Katie Maloney, Tom Schwartz and Lala Kent arrive, Tom and Katie are spotted holding hands briefly.
Tom is with his mom and offered her some chicken when a server walked by with a tray of chicken.

Tana Mongeau is here at her table and she's fixing her hair and answers a phone call.

Kyle Richards and Mauricio Umansky are here posing for a pic as they enter.

KJ Apa walks over and shakes Cole Sprouse's hand and hugs Cole's publicist, he takes a seat right next to Cole. A ton of girls are trying to get pics with KJ. 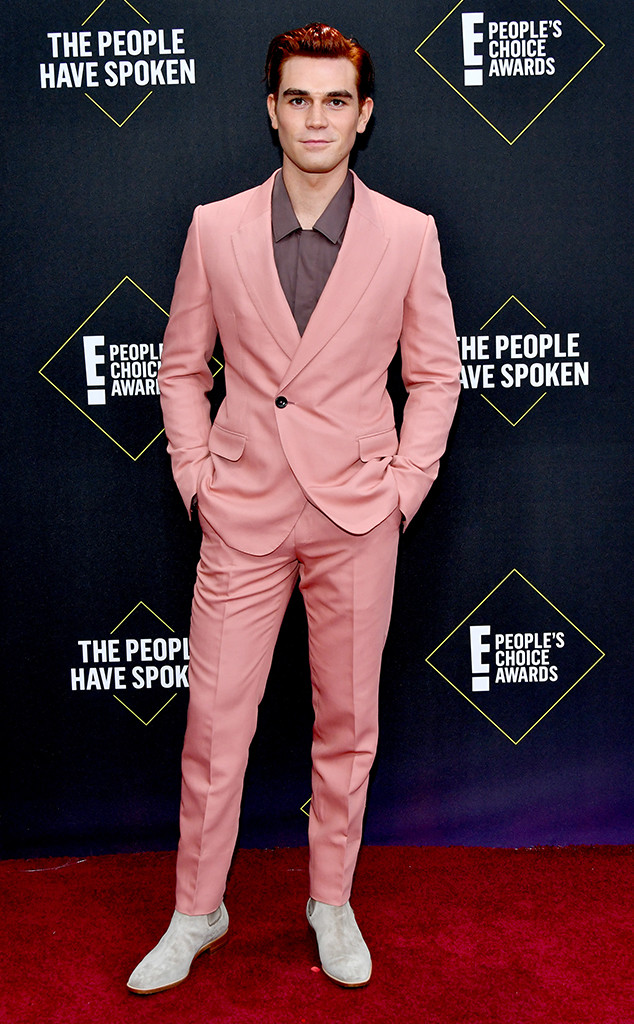 Jax Taylor and Brittany Cartwright sit at the Vanderpump Rules table. Ariana, Tom, James and Raquel also just walked up to table. Tom Sandoval is showing Jax and Brittany something on his cell phone.

Kat McNamara is very excited to see somebody at her table she is jumping up and down in excitement.

Hannah Brown and Colton Underwood are at the same table sitting next to each other. Tyler Cameron is across the other side of the table

Pink and her family walk in, she is holding her daughter's hand and Carey Hart is holding son's hand.

David Spade and Jimmy Fallon are posing for pics together.

Zendaya runs into Pink, they greet each other with a kiss and are very happy to see each other.

Blake Shelton and Gwen Stefani walk in to their seat, they are holding hands, Blake is leading the way. The show is starting and Gwen sees Pink and gives her a hug. 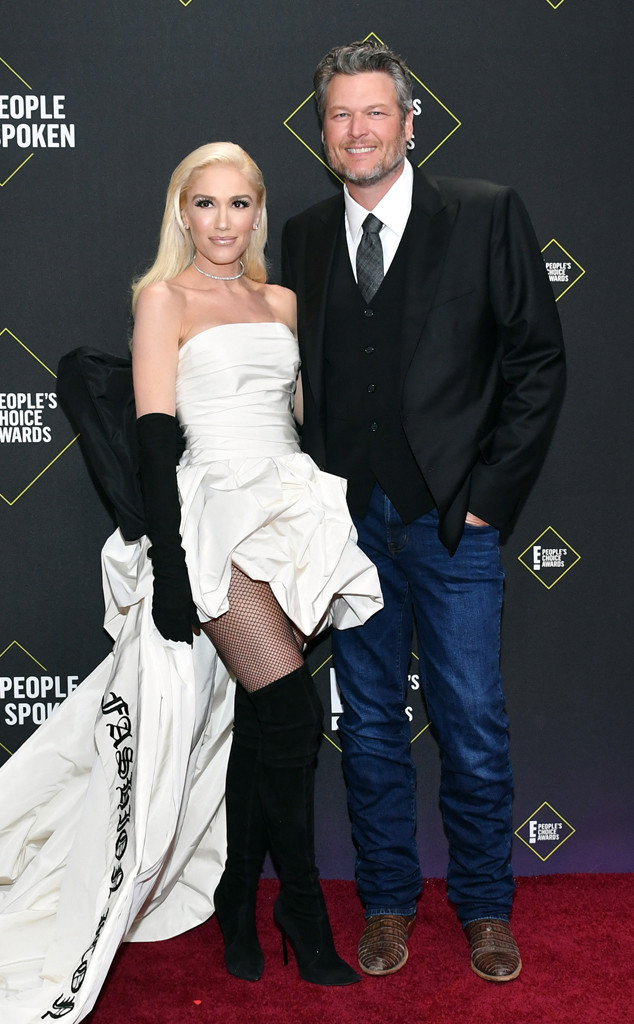 Gwen and Blake popped up to give Kevin Hart a standing ovation and everybody followed. After Kevin held his award and posed for a pic before he walked out. He was happy and smiling.

Colton Underwood and Tyler Cameron are talking to each other from across the table.

Kevin Hart and Robert Downey Jr. were talking and agreed to go to dinner. Kevin asked Robert for his workout plan. They were spotted having a long conversation backstage.

Adam Sandler is walking back and forth with his wife yelling "good luck everyone."

During commercial Blake has had his arm around Gwen they're smirking and looking at each other lovingly. Blake looks so proud of Gwen. He is the first person to stand up for her. He points to her and is like, that's my girl.

Pink's daughter is standing up behind Pink's chair trying to jump up and see Gwen on stage. All the Kardashians and smiling and clapping for Gwen.

Blake is smiling so big for Gwen. 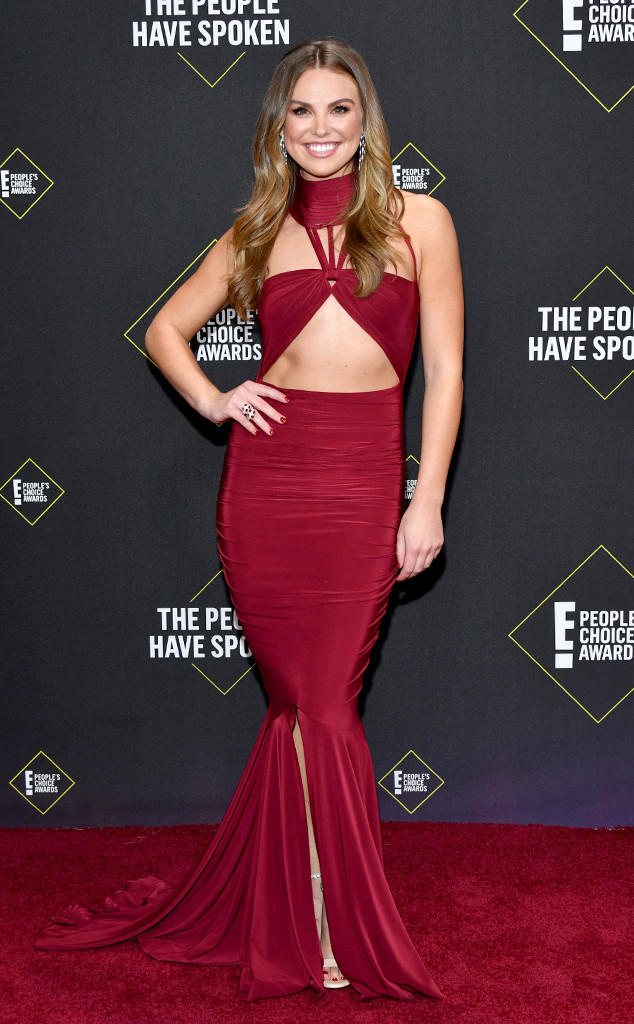 Kelsea Ballerini comes over to hug Pink and they're chatting.

Kyle Richards just walked over to the Kardashians table she's hugging and kissing each one of them and standing up talking to Kris Jenner.

Lisa Rinna gets up from her table and waves to Kris Jenner from afar then runs over and Kim Kardashian gets up they're talking very animatedly Lisa and Kim.

Fans are yelling, "We love you!" And Kourtney Kardashian and Khloe Kardashian smile and wave.

Alessia Cara just came over to Gwen and Blake's table and they're shaking hands and greeting each other.

Colton Underwood and Cassie Randolph are sitting next to each other being cute, Tyler Cameron moved closer to where Cassie is and Hannah is still next to Colton but she isn't participating in their convo. She's talking to a girl on the other side of her. While Colton and Cassie talk to Tyler.

Tana Mongeau is dancing in her dress backstage and shimmying.

Hannah Brown and Tyler Cameron talking across the table! It was a group convo but Hannah and Tyler talked and laughed.

Vanderpump Rules' Ariana and Brittany just switched seats and the seat Brittany is now sitting in is where Jennifer Aniston is going to walk off stage and Brittany has her cell phone ready for pics. Brittany fully fangirling. Brittany tried to get a pic with Jen but it didn't work out.

When they played the clip of Aniston and Adam Sandler, Adam pointed to Jen and laughed.