Trust us, this will make your day.

On Wednesday, Lil Wayne proved that he's not a Potterhead during a hilarious game of Virtual Reality Pictionary on The Tonight Show Starring Jimmy Fallon. Tasked with drawing various items and phrases using a virtual reality device, the rapper and his teammate Claire Danes went head-to-head with host Jimmy Fallon and Lana Condor. But as the game progressed, it became clear that Lil Wayne needs a crash course in Harry Potter ASAP.

For the final round, the "A Milli" rapper gave his best rendition of the fictional character for Claire and the opposing team. With the winning guess automatically securing either team's victory, Lil Wayne confidently put on his virtual reality headset and prepared to draw.

Starting off on the right foot, he drew a circle for the young wizard's head, but quickly lost both teams when he added a spiky border around it. 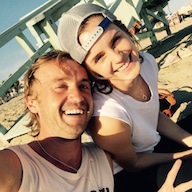 "Ronald McDonald?" the Homeland actress guessed, unable to make out who he was trying to draw. Jimmy chimed in as Lil Wayne continued to fill the board with swirls and spirals, "Cousin It?"

Still confused, Claire guessed again: "Tina Turner? I don't know." Realizing he had lost the group, Lil Wayne tried again. "Questlove," Jimmy shouted, insisting that the doodle looked like The Roots' drummer. "Well, I thought maybe with the hair. His hair. Who has an afro?"

Putting up his finger to signal that Jimmy's guess was close by calling out the drawing's hair, he drew a circle to signify Harry Potter's head. This time, he drew a rectangle for his body, which made the drawing seem more like a person.

Trying his best to make this portion of the drawing represent the "Pot" in the character's last name, he attached a long oval to the rectangle to signify a joint. "Diana Ross?" Jimmy said, still hung up on the hair. "Are they smoking something?" Taking Jimmy's guess in stride, Claire said, "The pot. The marijuana. Okay, who has an afro that smokes pot?"

As Lil Wayne tried to get the answer out of the stars, the buzzer rang and neither teams were able to guess who he was drawing. Thinking it was a no-brainer, he yelled, "It's Harry Potter!"

Piecing together the clues, Jimmy realized that the "6 Foot 7 Foot" rapper was drawing each word separately instead of trying to draw the actual character. "Hairy, Pot-er," Jimmy said as he and Claire finally understood what Lil Wayne's drawing meant, before falling to the ground laughing.

Praising her teammate's creativity, the Romeo and Juliet star said, "That's so good! That's amazing! That's incredible!" Even though she didn't guess the clue, Jimmy still gave Lil Wayne and Claire the win for his idea.

Watch Lil Wayne blow Jimmy, Claire and Lana's minds with his Harry Potter drawing in the video above!