Happy Birthday, Shakira! Celebrate With Her Best Music Videos Ahead of Her Super Bowl Halftime Show

As we do our last-minute shopping to load up on snacks and wings for today's Super Bowl, we're taking a minute to honor one of today's halftime show performers.

Shakira, who will be featured with Jennifer Lopez on stage in just a few hours, has multiple reasons to celebrate today since not only will she get to play for millions of people, but it's also her birthday!

That's right, the now 43-year-old Grammy-award winning singer's birthday festivities will include playing some of her best hits for a full stadium and plenty of others watching on TV. (Meanwhile, we get anxiety when people are watching us simply blow out the candles!)

We're taking a look back at the artist's best music videos as a toast to her big day.

From letting a she wolf out of its closet to shaking hips that don't lie, Shakira consistently delivers with creative videos, sexy choreography and stunning setpieces. 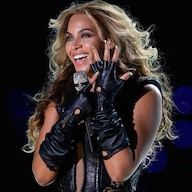 Take a look below and also vote for which of her music videos if your personal fave!

The Latin Grammy-winning music video features the singer emerging from the ocean and dancing in front of many wonders of the world, from stampeding horses to mountainsides, proving she is literally the queen of the world.

Let it out so it can breathe!

In this iconic music video, Shakira incorporates a mix of dance styles to embody her werewolf-like transformation that has been pent up.

From fingernails growing into claws to the artist's choreography inside of a cage, this 2009 music video had plenty of unforgettable setpieces.

The music video for the 2007 hit with Beyoncéfeatured both music titans belly dancing and mirroring one another, from their choreography (that was reportedly rehearsed only the day of) to their styling.

The MTV Video Music Award-winning performance in "Hips Don't Lie" featured Shakira with Wyclef Jean and saw the songstress pay homage to her Colombian roots with costuming inspired by Carnival of Barranquilla, one of the country's biggest celebrations.

This 1999 music video nabbed the performer the International Viewer's Choice Award at the MTV Movie Awards and a Latin Grammy nomination, but was also a significant moment for the artist as it ushered in her huge English language domination that would unfold over the next few years.

This song and video, featuring Shakira reminiscing on a former flame and shaking her hips while covered in body paint, won the artist a slew of awards, like the Video of the Year at the 2005 MTV Video Music Awards Latinoamerica.

Shakira's most-viewed video to date—and YouTube's 25th most watched upload on the platform—see's the artist enticing Maluma to an underground bar via her dance moves.

"Waka Waka (This Time for Africa)"

Shakira's international influence was fully appreciated with the release of this song and music video, which served as the official 2010 FIFA World Cup song for the major sporting event, which took place in Johannesburg, South Africa that year.