JoJo Siwa has one rule upon entering her home: "There's no being sad."

The 16-year-old internet sensation, who even has North West as a superfan, informed E!'s own Jason Kennedy of this rule during today's all-new In the Room. While Kennedy confessed that he was late to the JoJo Siwa bandwagon, he revealed he was excited to enter the famed YouTuber's colorful world.

For the those who don't know, Siwa got her start on reality TV, starring on Abby's Ultimate Dance Competition and Dance Moms. She used this momentum to launch her successful YouTube channel, music career and other business endeavors.

Thanks to her devoted fans, called Siwanatorz, Siwa is one of the most famous teens in the world.

In typical In the Room fashion, Kennedy got Siwa to open up on a variety of topics. We're talking everything from her booming bow business to her rumored boyfriend, Elliot Brown.

So, if you were unfamiliar with the teen wunderkind before, you're about to know a whole lot more about her.

For everything this week's In the Room taught us about JoJo, scroll through our major takeaways below! "I'm genuine, I am who I am. And, you know, I'm not fake in any which way. I just live my life and that really shows when I'm creating YouTube videos, creating music, whatever I'm doing, it's truly who I am," Siwa shared.

Even though her on-camera persona is "fun, bright, crazy [and] sparkly," she said it's important for kids to see she's a kid too.

"I think it's like a perfect balance of real, and also, out of this world," the Dance Moms veteran expressed. Siwa reflects on her bow business:

When you think about JoJo Siwa, what's the first thing that comes to mind? The answer: bows!

The young entrepreneur has certainly monetized on her signature hair piece, having sold over 80 million bows to date.

"It's crazy! And they're like, collectibles," Siwa dished on her booming bow sales. "People have to have them, it's wild."

Of course, it didn't take long for Siwa to put a mega-bow on Kennedy. Per Siwa, "the bow will always be a part of my life," even if she eventually wants to try a new hair style. 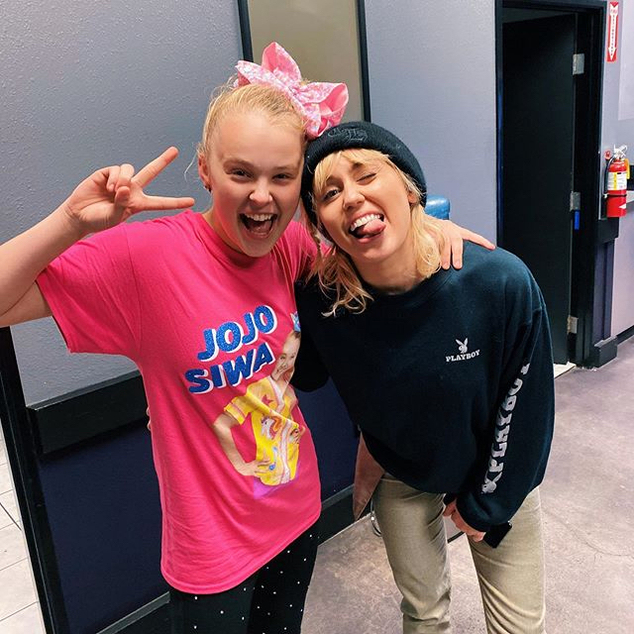 Although the triple threat entertainer danced around confirming the relationship, she made it clear that she has a fondness for Brown.

"I've actually talked with him about how I was gonna answer this, 'cause I was like, 'I know it's gonna come up some time,'" Siwa relayed. "Elliot is his name, he has been a family friend of mine for, oh gosh. I've known him since he was eight! Since I was eight."

After gushing that Brown is a "great kid," Siwa narrowly avoided declaring her love for her longtime family friend. "I will say, I'm really excited to see him this weekend. He's coming back out here," the 16-year-old star added.

Her love of Miley Cyrus:

Yes, Siwa always seemed destined for stardom, but she said she's in this business thanks to Miley Cyrus. Apparently, the blonde superstar was a big Hannah Montana fan.

"Miley, listen, I'm doing what I'm doing today because of you! I love you, gosh I'm gonna start crying if I talk about her," Siwa noted on what she'd say to Cyrus. "She's so awesome. Literally, if I could just hang out with her—we'd have so much fun!"

Shortly after her In the Room interview, Siwa got to meet her idol! 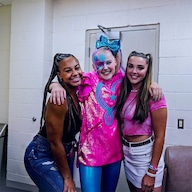 JoJo Siwa Has a Dance Moms Reunion Outside of the Studio

What she has in common with Lady Gaga:

Have you ever watched a JoJo Siwa music video and found it similar to one of Lady Gaga's? Well, you definitely have a keen eye then.

As Siwa detailed to Kennedy, she and the "Stupid Love" singer have the same choreographer, Richy Jackson.

"I've actually never met her, but her music is just so fun to dance to," Siwa spilled. "And Richy has his little moves that he does and there's some dances of hers that have a little bit of the same of mine, so they're so fun to learn."

Siwa opens up about Dance Moms:

Despite the cutthroat nature of Abby Lee Miller's dance studio, which was well-documented on Lifetime's Dance Moms, Siwa said she "loved her experience" and "would go back to it in a heartbeat."

"Honestly, it taught me the most how to sink or swim," the tween queen proclaimed. "It taught me how to fight for what's right for me, but in also a good way. You know, it was the best experience of my life."

Siwa isn't the only Dance Moms veteran to find success following the show. We're, of course, referencing her peer Maddie Ziegler, who has become Sia's go-to dancer for music videos.