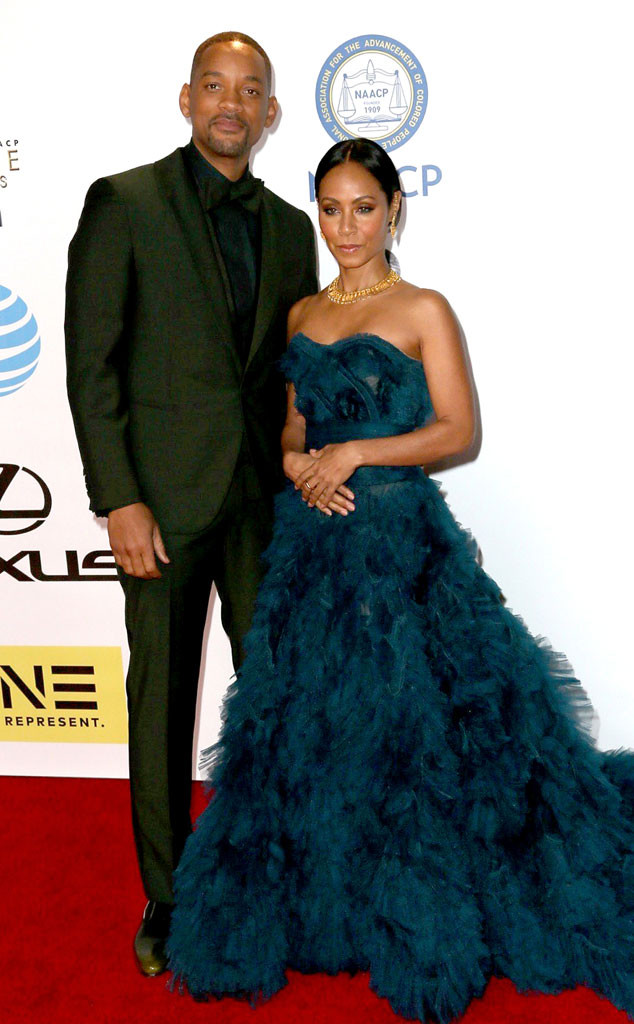 Will Smith and Jada Pinkett Smith's house is currently about eight miles away from the wildfires that are raging through Southern California.

The Hitch star took to his Instagram Story on Friday to share with his followers how close the couple's home is to the fires, stating that they haven't been told to evacuate just yet. "So I'm going up to a higher place to take a look out at the fire," Will told his followers. "We're about eight miles from it, we haven't been told to evacuate just yet."

Will then said that his daughter, Willow Smith, is "nervous" so she "made me go outside and look and make a daddy assessment." The video then panned to family's house as Will showed where their residence is compared to the fire.

"That is very scary," he said. "We are prepared to evacuate as soon as we get the word. If you are in the evacuation zone, go now!" 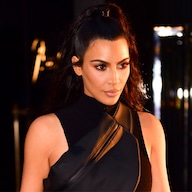 Kim Kardashian Forced to Evacuate Her Home Amid Wildfire 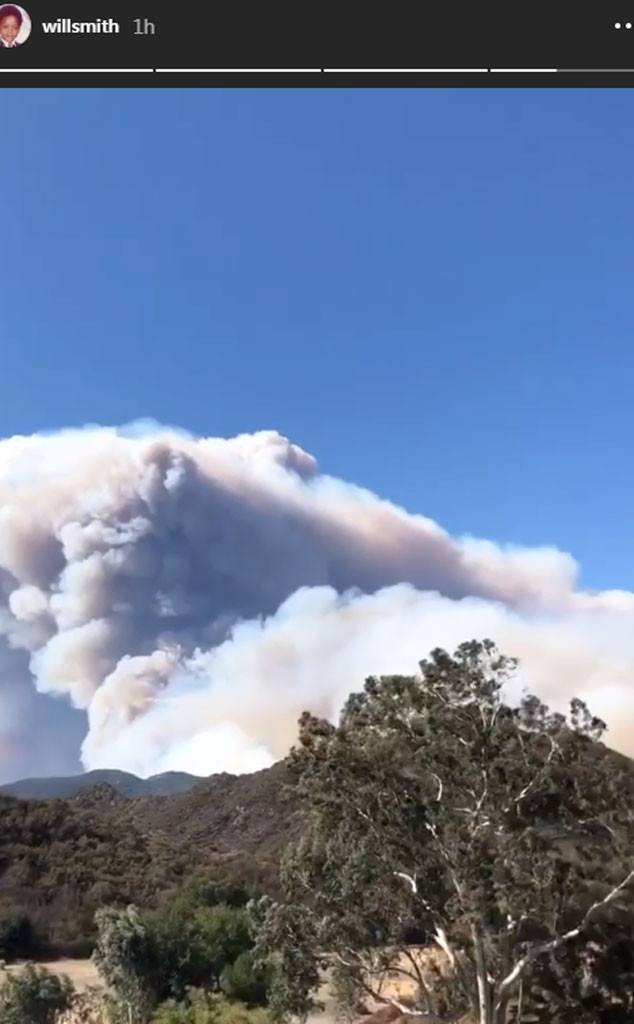 Alyssa Milano, Rainn Wilson, as well as the Kardashians are among the celebs who live in those evacuation zones.

"I just had to evacuate my home from the fires. I took my kids, dogs, computer and my Doc Marten boots," Milano tweeted Thursday night, adding that her husband is in New York and her horses are being evacuated by her trainer.

"My House has been evacuated due to nearby fires in Thousand Oaks. (The pigs & dogs are fine, thank you)," Wilson wrote to his followers Thursday. "Please send your prayers to the people of Thousand Oaks and the victims of the shooting that are now having to evacuate their homes and neighborhoods. Then send them some cash." 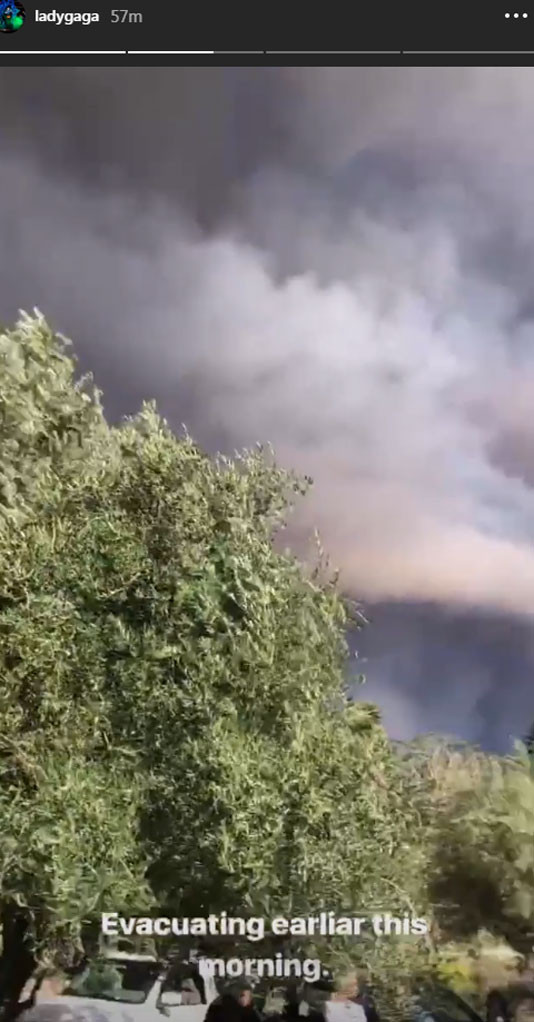 Lady Gaga also evacuated from her home on Friday morning, sharing footage from the wildfire close to her home on Instagram Story.

"Sending my prayers to everyone today," she wrote along with photos from the fire as she evacuated.

Kim Kardashian was also forced to evacuate her home on Thursday. The Keeping Up With the Kardashians star was just landing back in Los Angeles from a trip out of town when she took video of the fires from her plane window.

"Pray for Calabasas," she wrote on Instagram. "Just landed back home and had 1 hour to pack up & evacuate our home. I pray everyone is safe."

Kim gave her fans an update on Twitter Friday, writing, "I heard the flames have hit our property at our home in Hidden Hills but now have stopped. It doesn't seems like it is getting worse. God is good. I'm just praying everyone is safe Fire Fighters, I love you and thank you for doing all that you can to keep us safe!"

She added, "I pray the winds are in our favor."

Trying to get my mind off of this fire and snuggling with my niece. We are all safe and that’s all that matters

Kourtney Kardashian also shared footage of her packed car on social media, while Khloe Kardashian tweeted that she was with True Thompson, Rob Kardashian and Dream Kardashian "keeping watch" on the fires.

Kim later shared a photo with True, writing, "Trying to get my mind off of this fire and snuggling with my niece. We are all safe and that's all that matters."

"Iam genuinely concerned about my home burning down it's right on the canyon in calabasas and I can't get home to any of my things right now," Iggy Azalea tweeted Friday. 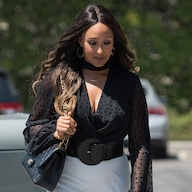 Sophia Hutchins took to her Instagram Story on Friday to share a video of her and Caitlyn Jenner, letting everyone know they "safe" and with their dogs and a few of their belongings in a car.

Kylie Jenner also told her Instagram followers on Friday that the fire is "so close" to her house. "Hoping everyone is staying safe," she wrote. "I'm hoping for the best."

We love our community #malibu so devastating... taking us hours to evacuate. Girls are safe. @aaronwilliamcameron & I trying to get out with our furry children. Be safe everyone... so emotional seeing the devastating loss of homes, families & animals

We are sorry to share the news that the #WoolseyFire has burned Western Town at #ParamountRanch in Agoura. We do not have any details or photos, but it is our understanding that the structures have burned. This area is an active part of the incident and we cannot access it. pic.twitter.com/oC4n7KR8ZT

The Santa Monica Mountains Twitter account also shared sad news with followers on Friday, writing that part of the set for HBO's hit show Westworld has burned to the ground.

"We are sorry to share the news that the #WoolseyFire has burned Western Town at #ParamountRanch in Agoura," the tweet reads. "We do not have any details or photos, but it is our understanding that the structures have burned. This area is an active part of the incident and we cannot access it."

this is my street as of two hours ago praying for the safety of all my malibu fam, grateful to our brave firefighters please stay safe 🙏🏼

My son and nephews helping evacuations and bringing food to the firefighters somewhere in the hills above Thousand Oaks. #californiafires

Our home is just to the left! Praying

Robin Thicke and April Love Geary shared a scary photo of the flames as they approached their home.

Bachelor producer Mike Fleiss took to Twitter on Friday to say a prayer for Malibu, which is close to the house where the ABC show films.

"Pray for Malibu— and #TheBachelor Mansion..." he tweeted along with a picture of the wildfire.

Our thoughts are with everyone being impacted by the wildfires.