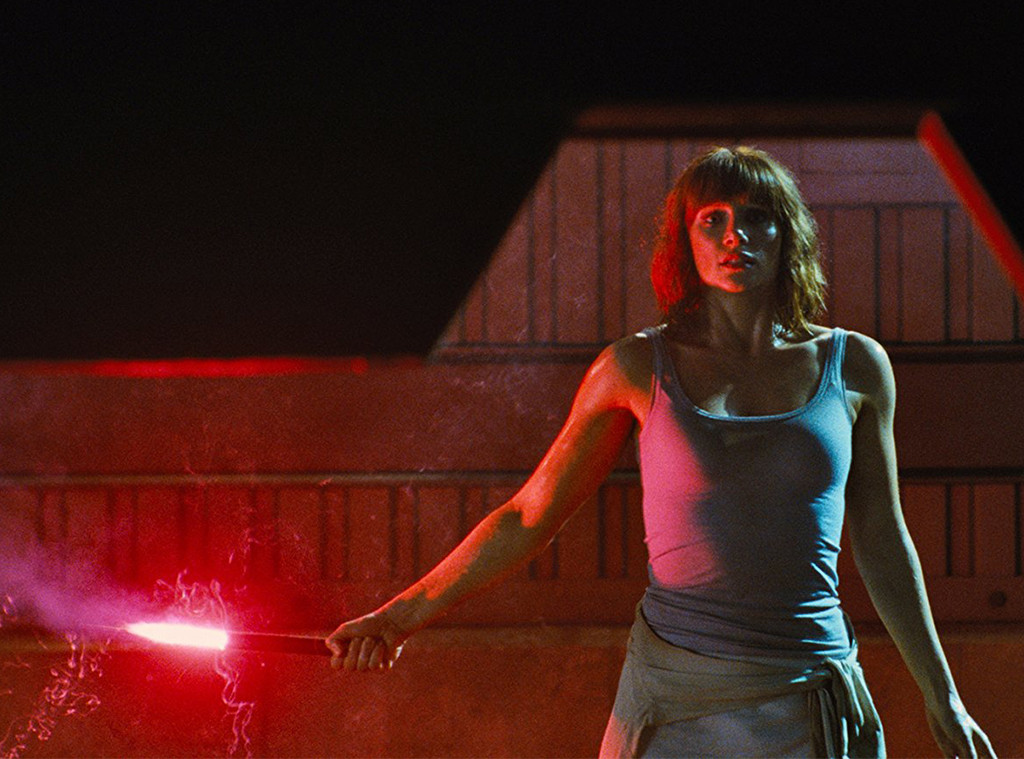 Not always in Hollywood.

Sometimes, the most formidable female leads are jumping platforms, evading enemies and doing dangerous stunts in—let's be honest—kind of impractical footwear. Take for instance, the first installment of Jurassic World, in which Bryce Dallas Howard wore beige heels throughout intense chase scenes. It was a choice Howard was initially proud of, explaining how it reinforced the story from her character's perspective. A corporate manager doesn't bring flats to work expecting to outrun a T-Rex, right? Still, fans noticed, and it was announced that Bryce wouldn't be wearing heels in the sequel, Jurassic World: Fallen Kingdom.

Truth is: The history of action heroine footwear runs the gamut, from super-practical sneakers, to trendy options, to ones that may enhance a hyper-sexualized character...and everything in between. In more stylized flicks, where costuming plays a larger role for a character, it may matter more what heel type is used to kick in the henchman's face. In other more realistic portrayals, a change of shoe may be written into the script.

Let's examine how past action stars have navigated this issue.

Black Window in The Avengers series

Scarlett Johansson reprises her role of Black Window in several Marvel movies, mostly wearing some form of boot. Typically, there's a short heel, but more importantly, most of her footwear is chunky and sturdy in shape and material—perhaps to protect her feet in very combat-heavy scenes. Could she lose the height in the heel without taking anything away from her character? Yes, probably.

Every action hero—no matter gender—can consider themselves lucky to shoot an action sequence in sneakers. Action movies tend to be more dramatic and based in some incognito world or subculture, which require more sophisticated costuming. Luckily, Taraji P. Henson's character was stalking her prey, who just happened to be going on a run. Often, the context of the scene dictates the footwear.

Based off mid-century comics, it can be easy to over-sexualize such a well-known character. But Gal Gadot's costume both stays true to its iconic roots and a more modern sensibility. Her boots are just as bulletproof as the rest of her modern-day metal armor.

Now here's an action movie made with realistic details. At the beginning of the first action sequence, Angelina Jolie's character, dressed in a somewhat dated CIA skirt suit and heels, takes off her shoes and battles the opposing forces bare feet until she can find a sturdier option at home. The shoe change was written in the script, something perhaps future filmmakers should take note.

Now here's a smart lady. With one hand holding a full-grown man down, Lupita Nyong'o's character is quick to take off her heels to a) use it as a weapon and b) move around more freely—all while dressed in a floor-length gown. That's a warrior right there.

You will hardly find Michelle Rodriguez's tomboy character wearing anything but sensible shoes in the Fast franchise. However, at a black-tie party, a girl's got to dress the part. Even the opposing bodyguard, played by pro wrestler Ronda Rousey, was decked to the nines. To be fair, a well-tailored, sleek suit or jumpsuit may have been more true to these characters, but you can't deny how lethal a pair of stilettos can be, especially as the heel is used to stab an opponent? Was this perhaps a cheap opportunity to feminize two strong women? Or was this a scene to contrast first-class decorum with sheer brute force and agility? You decide.

Love or hate the 2004 superhero flick, but Halle Berry brought a memorable spin to the character. The scantily clad, floor-crawling villain-turned-hero unapologetically used her sexuality in her favor. She didn't just run, she cat-walked...in heels, of course.

Everything about this action flick was stylized, from the credits to the lighting to the euro EDM soundtrack. It would make sense that Charlize Theron's spy wardrobe would be just as cool, sophisticated but under the radar as the film's overall aesthetic. How does that translate in footwear? The trendy, ubiquitous but not-impractical block-heel boot.

Trinity in The Matrix

When every rebel character is clad in head-to-toe latex or leather, this overall aesthetic will dictate what's on the feet. Carrie-Anne Moss wouldn't look right in anything other than leather boots, the shoe du jour for edgy action heroes that are somewhat stylish.

In was 2003, square boots were in at the time. What else would Jennifer Garner's character, an heiress who just happens to know martial arts, wear at the time? We can forgive her.

When you're a covert operative used by a government to take out targets, only to be double crossed, you wear whichever shoes that can help you run, jump and kick whomever you need to survive. In this case, a pair of utilitarian boots.

Do you think footwear in action movies should be more sensible or should they look the character's part?