Fredrik Eklund Reveals If He Has a Favorite Twin

The star of Bravo's Million Dollar Listing New York revealed how fatherhood has changed him on Tuesday's episode of Watch What Happens Live With Andy Cohen.

"I feel like I'm much more sensitive—in a good way," he told host Andy Cohen. "And I appreciate parents; I appreciate my own parents and my brother. Looking at family, looking at everything, differently."

Eklund also dished on daddy duty, arguing he was better at changing diapers than his husband Derek Kaplan.

In addition, Cohen asked Eklund which of his twins, Freddy or Milla, is his favorite.

"You're not supposed to have favorites. It's twins," the proud papa said. "No, I've been thinking a lot about this because…Milla is my biological daughter and Freddy is biologically Derek's. So, it's very important not to gravitate towards Milla….So, no favorite."

"So, Milla's your favorite," the host said.

Eklund also said his sex life with his husband has been "really amazing" since they've become dads and that his spouse has become "hotter and hotter."

"There was a period when they arrived where we were a little bit overwhelmed by life and them," he said. "But now, you know, it's such a sexy thing—seeing him with the kids, him holding the babies." 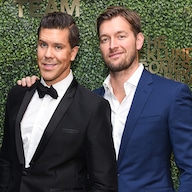 Eklund and Kaplan welcomed their twins in November. Eklund described the births as "the happiest moment of my life" on Instagram.

Eklund's road to fatherhood hasn't been easy. After marrying Kaplan in 2013, Eklund seemed eager to start a family right away. Kaplan, however, appeared a bit more hesitant. The baby timeline proved to be a point of contention that played out on the Bravo show. During a reunion, Kaplan, who also has a son named Kai, expressed concern he would have to do most of the parenting due to Eklund's career, adding that "it would be the straw that breaks the camel's back."

But in the following season, Kaplan said he was ready to have kids. The Swedish broker said the two were expecting a baby in 2015. Sadly, he revealed the couple's surrogate had miscarried and that they had lost twins just a few months later.

"I'm sad to share we've had a failed pregnancy," he wrote in part of an Instagram post. "I have cried so much that I can't cry anymore."

Unfortunately, this wasn't the couple's only miscarriage. During an interview with The Daily Dish, Eklund said they experienced another miscarriage. He also said he wasn't sure he wanted to keep trying to have a child during an episode of his Bravo show.

"I never thought I was going to say it, but I'll say it: I think I'm done," he said after learning their surrogate wasn't pregnant.

However, the two finally got their happy ending in season six, when Kaplan revealed their surrogate was pregnant with twins.

Watch the video to see Eklund talk about life as a dad.