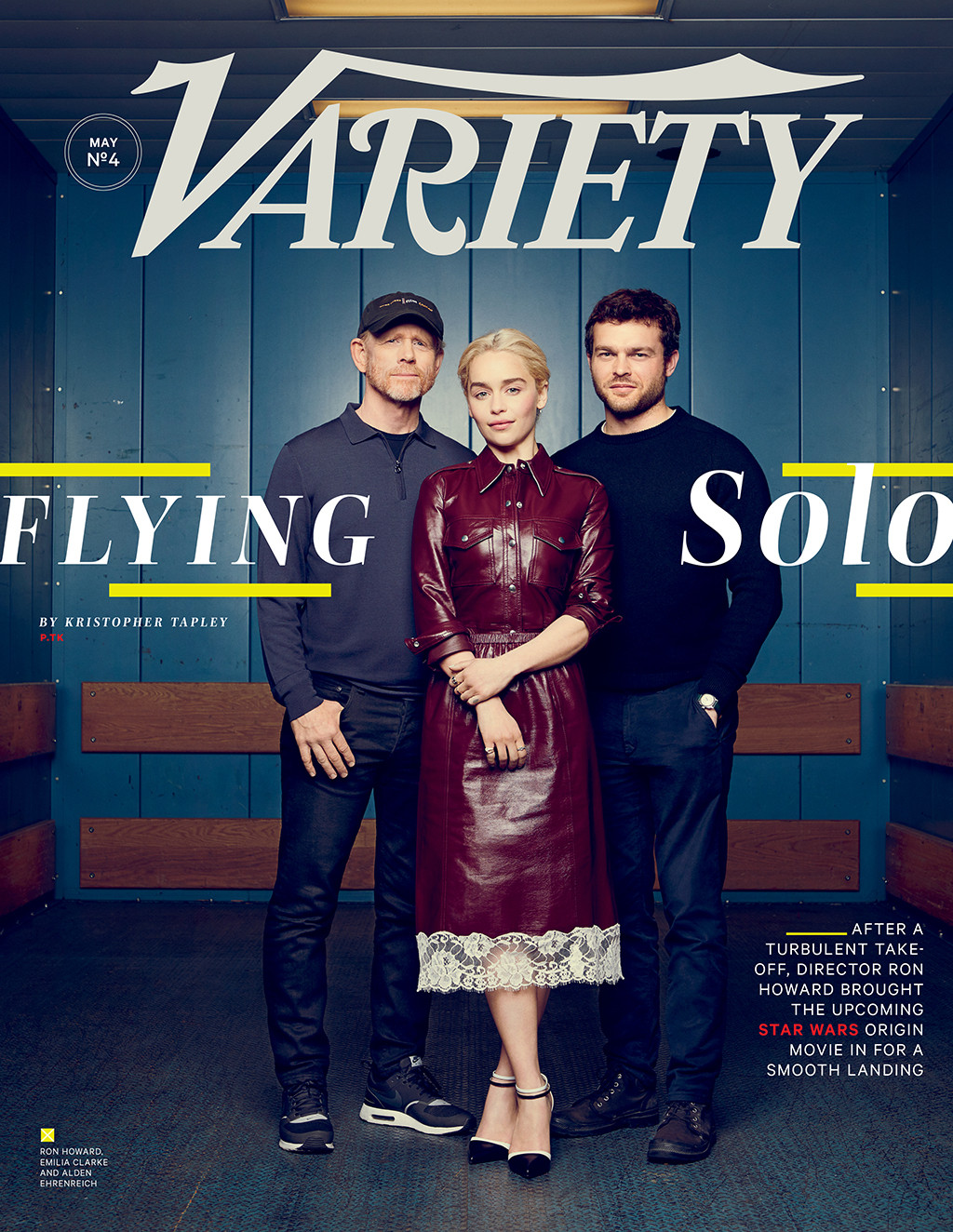 In the summer of 2017, four months into filming, Lucasfilm announced directors Phil Lord and Christopher Miller had left the blockbuster over "creative differences"—a.k.a., they were fired. Lucasfilm president Kathleen Kennedy hired Ron Howard to replace Phil and Christopher, raising the film's budget to $250 million and adding four more months to the filming schedule.

In the end, Ron shot about 70 percent of Solo: A Star Wars Story, giving him the sole director credit, while Phil and Christopher were given executive producer acknowledgments. Before the movie hits theaters, the cast and crew talked to Variety about all the behind-the-scenes drama.

Screenwriter Lawrence Kasdan, who's shepherded the series since 1980's Star Wars: Episode V – The Empire Strikes Back, realized early on that Phil and Christopher's vision didn't match his own. "Tone is everything to me. That's what movies are made of," he said. "But this was a very complicated situation. When you go to work in the morning on a Star Wars movie, there are thousands of people waiting for you, and you have to be very decisive and very quick about it." And with a "million" split-second decisions to make each day, "You are committing to a certain tone." Should any of the producers raise an issue, he explained, "You're going to have trouble."

"No one was happy about it," Lawrence added. "It was agony."

Joonas Suotamo: Meet the Actor Behind Chewbacca in Solo Jonathan Kasdan, Lawrence's son and co-writer, maintained that Christopher and Phil "did everything they could to make it work, as did we." Lawrence also said they were open to changing the story—to a point. "What we were very defensive of and wanted to have succeed was this tone, because this is not like any other Star Wars movie. Its connection to Star Wars is only in its spirit. It's Han's tone. It has very little to do with A New Hope. That's a different thing we've seen play out in six or seven movies. This tone is reckless and unpredictable and feckless, as Han is. There is no Force. There's no real Empire. This is about people scrabbling along," he said, explaining that some elements are non-negotiable. "They're not trying to save the galaxy."

For the cast, the shake-up at the top created quite a conundrum.

"I've tried to use this as an opportunity to navigate pressure and what other people think," Alden Ehrenreich said. "That pressure is always there on every movie. This is just a very intensified version of that. For me it's about 'What do I have control over?' And it's very little."

(Alden previously told Esquire he had no clue the directors would be replaced. "On a personal level, it felt emotional, for them to be going after we'd set out on that course together. Because I spent a lot of time with them, and we had a really good relationship—they also cast me," the film's lead said. "But I think at that point, they were kind of on board with [the decision], too. Like, 'This is what's happening.' That's not what they said to me, but that was the vibe I got.")

Emilia Clarke said Christopher and Phil seemed to be "figuring it out" as they went along. "We were all still very much in a collaborative place of 'Where does this want to go?' This is a movie that has an enormous amount of pressure on its shoulders, therefore everybody making it feels some of that pressure. So when Ron came on, for me it felt amazing to be able to have a second set of eyes come in at this point in making the movie. How often do you get that chance to go back and try different things?" Before Ron was hired, Emilia was nervous. "I texted Jon Kasdan about six times going, 'What? Really? You're joking. We're not that lucky, surely, to get Ron Howard to come and take the movie on,'" she said. "Any fears were wiped away pretty quickly."

Donald Glover, who'd been a fan of the film series since childhood, was on board. "I wanted to play Lando. That was it," the actor explained. "Everything else was secondary in that moment."

Christopher, Kathleen and Phil declined Variety's requests for an interview.

Solo: A Star Wars Story is in theaters Friday.